A Heavenly Day Spent with Chocolate

A few weeks ago, I spent a day combining two of my very favourite things. No, not Tom Hiddleston and Benedict Cumberbatch (puts on bucket list). The Peak District in Derbyshire, England, and chocolate. I went to a place called Cocoadance, which is on a National Trust farm on the outskirts of the beautiful town of Castleton, which sits on the border of the White Peak and the Dark Peak. It’s a haven for outdoorsy folk, and, apparently, chocolate lovers.

Cocoadance has been going for almost twenty years, and as well as making chocolate for the likes of Harrods and Harvey Nichols, they also run workshops for the public to go and attend. You have to pay, naturally, but you get a thorough education, lots of tasting and a whole pile of chocolate to take home with you. What could be better? 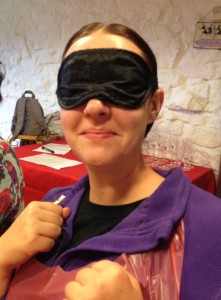 It was indeed a fantastic day. We started out by settling in, meeting the guy who runs the workshops, Dave, and generally chatting until everyone turned up. We were only allowed to drink water to start with, as we had to keep our palates clean ready for the tasting session. After donning aprons and name badges, it was time to start.

Dave talked us through the invention of chocolate, how it’s made, how it’s sourced, and so on. Then the reason for the blindfolds on the tables became clear. Having been reassured there was nothing untoward going on – there were children there, after all! – we reluctantly donned our masks as Dave pressed chocolates he’d made into our palms. We were then to eat them and try and guess things like how much cocoa powder was in them, how many cocoa solids, any other tastes, and so on. It was interesting to see what other people came up with – and I learned a whole new appreciation for milk chocolate after being given a couple of seriously bitter pieces of dark chocolate. It’s certainly an acquired taste!

Next, it was onto making our own. We donned very sexy hairnets. First of all we made chocolates in moulds – we could use white, milk or dark chocolate (or a combination), along with various other things like sprinkles, Smarties, marshmallows and more. Cue lots of giggling and mess, and a whole bunch of noise as we were encouraged to bang our moulds on the surfaces to remove any air bubbles. 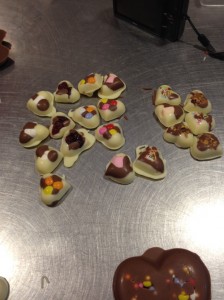 After that, we were given trays with greaseproof paper and told to go nuts. Basically, the faster we made things, the more we’d have to take home with us. At one point, my hands were entirely covered with chocolate due to a poorly made piping bag! But I did, in fact, fill my tray with a mad combination of swirls, buttons, flowers, a rubbish drawing of Scamp, a book, a pen, my name, dipped marshmallows, and lots more. I kept mine fairly simple, using sprinkles and a combination of white and milk chocolate – no dark chocolate for me.

The trays were then stacked on a rack to set, and we grabbed our moulds from the fridge to see how they’d turned out. Cue more banging on the table to get the little chocolates out. Some of mine turned out better than others – apparently I should have banged on the table more, but my poor sensitive ears couldn’t take it! However, it didn’t affect the taste one bit – they were delicious.

We then started boxing our creations up. Dave generously told us to help ourselves to any of the chocolates he’d pre-made before the session for us to taste, so I ended up with several pieces of chocolate looking much more professional than mine! Adding our tray-made chocolates into bags (the box was long since full!) and washing up, removing our hair nets and aprons, lots of very happy chocolate lovers headed back out into the Peak District and onward with their goodies, along with lots of sarcastic comments about the chocolates not managing to survive the journey home!

After a delicious meal in a nearby pub, we headed home, exhausted but happy. If you can get to the Peak District and this sounds like your kind of thing, I’d definitely recommend it. It was so much fun!

One Response to "A Heavenly Day Spent with Chocolate"