Cover Art for A Taste of Rome

I’m just swinging by quickly to show off the cover art for A Taste of Rome, coming soon from Ellora’s Cave. I don’t know when, exactly, as I’ve not long signed the contract, so it could be the end of this year or early next year. Let’s hope for earlier 🙂

This blurb isn’t approved yet, but it’ll give you an idea of what the book’s about… 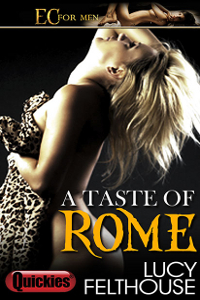 Book three of the A Taste Of… series

Ryan Stonebridge and his friend Kristian Hurst have traveled to London and Paris so far on their gap year adventure, before starting university. Now it’s on to Rome.

The American girls they met in Paris are along for the ride, providing lots of sexy fun for the boys. But, as none of the foursome are looking for commitment, there’s still plenty of scope for hooking up with the locals. Voyeurism, cougars, risky outdoor sex and threesomes abound in the Italian leg of the boys’ European adventure.

As soon as I find the time between my other projects, I’ll start penning the boys’ Amsterdam adventure…