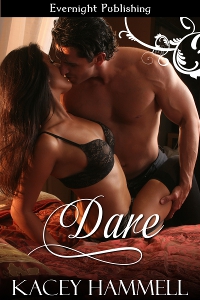 Legal secretary, Olivia Warner enjoys being single and, aside from her closest gal pals, usually keeps to herself. But the night of her thirty-fourth birthday, she and her friends spend a fun-filled evening at a local bar where her friends dare her to approach a man, and spend the night with him. Olivia’s not one to turn down a dare, especially from her old college pals. She only hopes the man in question is in for some good conversation, because that’s all she’ll give him.

Darren “Dare” Shalvis has given up on women. He’s tired of being chased for his money, good looks, and prowess in bed. He prefers to meet a woman who, for once, wants nothing more from him than mere conversation. If only the woman asking him to spend the night with her wasn’t his favorite legal secretary.

Accepting a dare has never been so tempting…

She gave a small laugh and lifted the glass for a drink.

Dare watched her lips as she drank. He wondered what they’d taste like. It was something he’d considered many times lately.

He was drawn to her, but unsure he’d ever act on it.

Her whole demeanor said ‘hands off.’ And he wasn’t sure he was ready for the challenge.

“I’ll cut right to the chase.” As he turned on the stool, their knees brushed. Neither moved.

He thought he saw her eyes lit up. Perhaps Ms. Warner wasn’t as immune as he thought.

“My friends brought me here tonight for my birthday.”

She smiled. “Thank you. The jury’s still out whether it’s happy or not. My friends decided that as a present they’d get me a man.”  She blushed and reached for her drink.

She set down her glass and continued, “They dared me. Dared me to find myself a man and spend the night with him.”

Women…who understood them? He’d only ever participated in dares when he was younger. He didn’t think anyone took them seriously anymore.

“And you need my help, how?” Dare’s heart rate accelerated. She wasn’t asking him to…

She stared up at him, her gaze steady. “I need you to spend the night with me.”

If he hadn’t heard it with his own ears, he wouldn’t have believed it. This night was the strangest he’d had in a long time. It was as if he’d been offered a million dollars on a silver platter.

“No. Not to have sex. God, this is mortifying.” Olivia placed her hand over his where it still rested on her knee. “Just to spend the night together—a movie, hang out, whatever—until eight a.m., when the dare is over.”

Dare laughed. She talked so fast he could hardly keep up. He’d never seen her so animated before. He liked her flustered and breathless…a lot. He wondered if she looked and sounded like that during sex.

He couldn’t go that route. Not now.

“Okay, so let me get this straight. You want us to spend the night together—with no sex—until morning? All because of a dare? Why didn’t you just say no?”

“I can’t. In college, the five of us made a pact—in blood, for God’s sake—that we’d always be friends and never back down from a dare. Trust me, right now, I wish I’d never made it.”

He chuckled. “Yes, I can imagine how you feel.”

“I’m so tired after the day we had. This was the last thing I needed tonight.”

“Yeah, when I stopped by the office today you seemed a bit irritated.”

She sighed and ran her fingers over his hand. Dare was surprised how comfortable it felt to have their knees and hands touch. He didn’t think Olivia was even aware she caressed his hands…or wreaked havoc on his libido. If her innocent touches could send him into overdrive, he wondered what would happen if she put all she had into it.

“It was the day from hell. I just wanted to meet the girls for a few drinks, then head home to soak the day away.”

Dare grit his teeth and tried not to think of Olivia in a bathtub—water floating around her body, relaxed, languid. The image could send him over the edge.

Olivia smiled and her eyes danced.  “Thank you. I really appreciate it. The last thing I wanted to do was have to pick up some random guy. I’m so glad you were here.”

Pleased he could help her, Dare grinned. He realized he wanted to anything to put that carefree smile on her face.

She scowled. “Well, we could go back to my place. I have a spare room that you can crash in if you want.”

Surprised, Dare took in her flushed face. “Are you sure?”

She nodded. “Yeah. We don’t exactly have to stay up all night. It’s still spending the night together, right?”

He chuckled. “Yeah, in a manner of speaking. Your friends weren’t specific.”

A smug smile crossed Olivia’s face. “No they weren’t. Which is a testament to how much they thought this through. I would have made a list of do’s and don’ts.”

They both laughed. Olivia had a naughty streak and he liked it. Liked it—and her—very much. A night with Olivia Warner wasn’t what he’d expected.

Sure, he’d thought of her in his bed often, writhing and moaning with passion, but he never thought fantasy would become a reality. He couldn’t let the opportunity go.

His buddies didn’t call him Dare for no reason. He could never resist a challenge.

He placed both hands on her shoulders, drew her gaze from her glass, and put his cards on the table.

“What if we have an agreement?”

She frowned. “What do you mean?”

“For us to spend the night together, we should have some ground rules.”

“I will spend the night with you. More than eager to do so, except one thing.”

“What’s that?” she whispered. He barely heard her but saw her lips move.

He wanted to taste them, desperately.

“I don’t want to sleep in any spare room.”

Her expression was comical but Dare didn’t feel like laughing.

“No. I want to spend the night in your room.” Dare had her full attention. She stared at him, eyes wide. “In your bed.”

The Wife and Mom: Born, raised and still living in her hometown in Ontario, Canada, Kacey found true love with her husband.  As a Mom of three, Kacey has made certain that each of her children know the value of the written word and the adventures they could escape on by becoming book-a-holics in their own right.