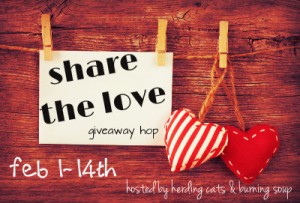 This blog hop is such a cool idea! In the blog hops I normally take part in, I set up a Rafflecopter encouraging folks to follow/like/tweet/etc me, but in this hop, I pay it forward. So I’ll be encouraging you to follow other people instead. How cool is that?!

So, what are you waiting for? Use the Rafflecopter below to enter the giveaway, then scroll down and check out the rest of the posts on this hop! 🙂