An Interview with Elizabeth Morgan (@EMorgan2010)

I’m delighted to have Elizabeth Morgan on my blog today, dishing the dirt on her day job, mythology and The Big Bang Theory. Take it away, Elizabeth…

Non-writing me has a day job in a clothes shop. When I’m not at work, or writing, I tend to watch a lot of films, or read, or I’m being hassled by my two cats to feed, cuddle, or play with them. And from spring to autumn I spend a fair bit of time gardening.

I’m constantly listening to music; I actually studied musical theatre in college. I originally wanted to be an actress. I do love anything theatrical. I actually collect costume masks. I am fascinated by Greek and Egyptian mythology as well as folklore and fairytales.

The idea for Truth or Dare? Was inspired by an episode of The Big Bang Theory. It was the episode where Leonard’s mother visits, and drives Penny and Leonard to drink. They end up getting rather drunk by doing Tequila shots, and things turn a little naughty. Yeah, you’ve seen this episode.

Anyway, I watched this episode – and this particular scene – and I just thought, “hmm, what a sexy and fun little story this would make.” Throw a naughty game of Truth or Dare? Into the mix and the rest of the story just grew from there.

I have wrote on and off since childhood, but it wasn’t until I was in college and we were given assignments to write our own scripts that I actually really got into it. A friend of mine read one of my scripts and told me that I should try writing a book, so I did, and have continued to do so.

My route to publication was rather slow at first. I was submitting books for about two years. I think I received about 60 rejections, before I got my first acceptance, but unfortunately the company shut down shortly after.

Three months later, my submissions were accepted and May 2011 marked the release of my debut novella.

I plan to self-publish these first two books in the series Summer of this year, and at least start on book 2, but before I begin the second untitled book, I will be working on reinventing an assigned Grimm’s Fairytale as part of Decadent Publishing’s new series, Beyond Fairytales. Very exciting.

No, I’m afraid I have no muse, and when characters stroll into my head they don’t resemble any sexy celebs, which is to some degree a shame, but then nice to have fresh new sexy faces stealing my attention.

In five years time I see myself writing full time, and not having to work in a retail job that is sucking the soul out of me.

Non- writing wise, well in five years time I will be 30 going on 31, so I guess starting my own family would be what I hope to be doing by then.

Muscled or skinny?
I don’t really mind either. A healthy average.

Tall or short?
Tall, but only because I’m 5ft7 lol

Moustache or beard?
As crazy as it sounds, it actually depends on the style. Some guys really look good with moustaches and beards.

Long hair or shaven head?
Long hair. Nice to have something to tangle your fingers in ;-P

Tattoos or piercings?
Tattoos. There’s something kinda sexy about them.

Blond, brunette or red head?
Any. Hair colour has never really been something I pay too much attention to.

Hottest celebrity (tell us why, if you like)?
Justin Hartley. He played Green Arrow in Smallville. The man gets better looking with age, but it’s his smile. Cheesy I know, but he has the most amazing smile and grin, and he has some really funny expressions.

Top same-sex crush (or opposite sex if you already like same-sex!)
Emma Stone. She’s a fab actress. She’s pretty, but not stereotypically so, and she is just really funny.

Most disliked celebrity (tell us why, if you like)
Beyonce

Favourite food
Such a difficult question ‘cos I really like food in general, but let’s say, Nachos. They are so fattening and bad for you, but they taste soooooo good.

Favourite book (tell us why, if you like)
I don’t actually have a fave book. I have books which I really enjoyed and blew me away; for example The Iron Duke by Meljean Brook, I just thought that was an amazing story. Her world building, and history, and the characters. . . wow. Basically, any story that made me go “damn, I wish I had wrote this,” is classed as a fave, and believe me there are a lot of them lol

Favourite place in the world (tell us why, if you like)
I haven’t really been very many places, especially outside of the UK. So, I can’t really say I have a fave place, but I did go to Rome a couple years back and I just thought it was awesome. 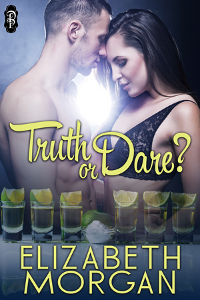 Do you dare tell the truth?

A tequila fuelled game of Truth or Dare is not Dani’s idea of fun, but when Cameron, the jerk who rejected her a year ago is the one provoking her into playing, how can she say no? Not that he’s giving her the option in the first place.

Bravado compels her forward, but when the dares get physical and their friends leave them alone, Cameron’s questions turn to her feelings for him, and unfortunately, lying is not part of the game.

Will a dare give Dani the courage she needs to tell Cameron the truth?

A wicked grin spread across his lips. It was almost as sexy as his brother’s. “I want you to lick salt off Cameron, and then take the lime from his mouth.”

He had to be fucking kidding. “What?”

“You heard the man.” The amusement ran clear in Cameron’s voice.

An idiotic bout of nerves skipped through me. “And do I dare ask where I will be drinking the tequila from?”

Ben’s gaze flicked to Cameron, who I couldn’t bring myself to look at. Holding up my hand, I cut Ben off before he suggested anything else.

“Never mind. I’ll do it.” Untangling my legs, I slid off the sofa, levelling a look at Cameron.

He pulled his T-shirt over his head, and my mouth dried at the way his six-pack rippled with each movement. He was solid, perfect. His skin was a healthy bronze. A fine dusting of dark hair ran from his navel and crept down into his jeans. I couldn’t help but follow the teasing path with my gaze….

Did I ever. I hated to admit it, but he was the kind of guy you just wanted to lick—well, anything off of.

“Nope. I’m just wondering why removing your top is necessary. Scared I’m going to spill my drink on your T-shirt?”

His lips turned upward. “Man told you to lick salt off me, but he didn’t say where you would be licking the salt from.”

Elizabeth started life wanting to be an actress because she loved entertaining people. She enjoyed nothing more than being able to make people laugh and to help distract them from reality for a few hours.

She studied Musical Theatre in college, but during her second year, her mind started to overflow with story ideas, so she began writing plays. Slowly, over the following three years, she was writing more and more, channelling every ounce of her imagination into the written word.

Now here she is, years later, hiding away like a hermit in her little cottage in Cheshire, England, writing like crazy and loving every minute of it.

One Response to "An Interview with Elizabeth Morgan (@EMorgan2010)"