Blood and Lust from Taryn Rose 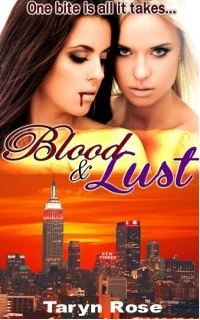 I am so proud to present BLOOD AND LUST, my very first novella and second published work (the first, being L WORLD). Plunging into paranormal fantasy was a real treat after my foray into the lives of characters living in a contemporary and realistic world. I am a huge fan of True Blood and Anne Rice novels, and always viewed vampires as a kind of tortured superhero. My vampire heroine, Skarlet, is somewhat of a cross between Xena: Warrior Princess and True Blood’s Bill Compton (before he turned evil). What’s funny, is I recently met a charming aspiring Broadway star with some nice credits to her name. She, like my other heroine and Skarlet’s love interest, Emma, lives with a talented gay male couple in Greenwich Village. After hanging out with her, I thought, hmm, a theatrical, optimistic and open-minded girl would make a nice counterpart to Skarlet’s brooding, principled and introverted vampiress. And soon Emma was born. Though she is delicate physically, Emma is strong-minded, able to brave a brush with the supernatural, perhaps even ready to find love in the strangest of places. I have learned that, in a sense, realism becomes even more important in paranormal romance in that emotions and the connection between the heroines (or hero/heroine) are drawn from out-of-the-ordinary circumstances and perhaps even more powerful. The author must make those circumstances arise organically out of the underlying world she has created, but the connection and chemistry between the two characters must work on an intensely realistic level.

After an opening night party, Emma Jones naively accepts a ride home from her lecherous producer and finds herself in a desperate struggle. But when a beautiful, mysterious stranger rescues her, Emma realizes that the real danger may have just begun.
Her savior, Skarlet, is an agent of the Vampire Commission, a secret organization with an intense interest in Emma – – or more specifically, her blood. Skarlet’s mission is clear: deliver Emma into the clutches of the Commission. But as they near their destination, Skarlet cannot deny the intense attraction she feels toward her breath-taking captive. Emma is drawn to her magnetic heroine as well and a fateful decision sets the two on a path of extreme danger and forbidden love. As the Commission closes in, a startling discovery raises the stakes and both women must choose – – between all they’ve ever known and a passion they’ve never known before.

“Goodbye, Emma.” Skarlet turned abruptly to leave, her long leather coat spiraling around with her.

“Look, I…I know we ‘never met before’, but I’m glad we did.” Emma’s eyes fluttered, as she struggled to find the right way to end the evening. Skarlet clasped her hand, and Emma stared into her intense eyes. She felt herself melting inside.

Emma took a breath, collecting herself. “I want you to come to my show. Tomorrow night at eight at the Evermore Theater. I’ll leave a ticket for you at the box office.”

Skarlet lifted Emma’s hand and kissed it, sending a tingle down Emma’s spine, and she felt an intimacy with this woman. The dark heroine who changed her life forever. Skarlet cupped her palms against Emma’s lower back suddenly, pulling her in, and Emma gasped at her sudden proximity to the woman’s lips. She held her gaze and froze as Skarlet brought her lips down to meet hers, kissing her. Gently at first, pressing her much larger breasts against her own. After a night of terror, Emma finally felt free, a feeling that magnified the waves of sexual energy that were surging through her body. She opened her mouth to catch a breath and sucked in the woman’s supple, assured lips, wanting nothing but to devour them. Her legs spread apart instinctually, a result of an aching that needed to be sated. And Emma recognized an urge she never felt before: To make love to a woman. An unbearable urge to be taken by Skarlet the vampiress in all her ferocity.

Before embarking on her literary career, Taryn spent five years as an associate at a national law firm, fantasizing about writing novels instead of briefs. When she caught herself changing the facts of a case to make it sound more interesting, she knew it was time to move on. Taryn’s first book, L World, was an All Romance eBooks bestseller.

One Response to "Blood and Lust from Taryn Rose"