I’m delighted to welcome Alison Tyler to my blog today to give us a tantalising teaser from her new novel, The Delicious Torment. 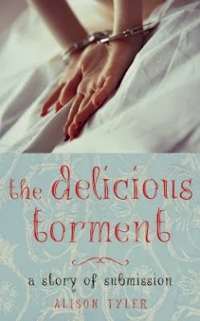 In The Delicious Torment, Sam falls down the rabbit hole. That is, if the rabbit hole is a new term for a glistening pit of jealousy. She not only has to learn to deal with her own desires, but she has to decide whether she can deal with Jack’s. That is, if what Jack wants isn’t only her. If what Jack desires is Alex, as well. How does she do? Well, see for yourself…

What the fuck? I thought. Oh, Jesus. What was going on?

Jack stood behind Alex, and he had a flogger in place. My mind tripped over itself in a mad rush to explain the situation. But my pussy didn’t need any explanation. I grew instantly wet at the sight, as I realized I hadn’t seen Jack in action like this before. Not outside of gazing into a mirror while he punished me, making me watch while he tanned my ass for me.

This was different. Jack was in charge of someone else’s pain. Someone else’s ultimate pleasure. Have I ever felt such a surge of white-hot jealousy before? I can’t think of a time. My stomach twisted, but my sex responded as strongly as if Jack had picked up a flogger and walked toward me.

Alex didn’t say a word. Didn’t make a sound. Jack leaned forward, so that his strong chest pressed firmly against Alex’s naked back, and I could imagine the words he was whispering in Alex’s ear. I told myself that this was about me—about Alex being unable to tail me proficiently. But that was only the story I made up for myself. I had no idea what the true dynamic was between these two men. I’d come into their game late. Alex had been working for Jack since his senior year in college. They had history I couldn’t begin to unravel.

Jack took a step back and started to work, and I saw Alex’s muscles tighten and release upon each blow. The room was starting to fill up as more guests arrived. There were a host of devices in the room, and I could hear different sounds as other slaves were buckled into place, or whipped, or chastised. But that was white noise to me. I was focused, intent, on the action right before my eyes.

Too intent, it turned out. Because before I was aware of what was going on, a queenly platinum-blonde woman in tight black satin stepped in front of me. She gripped my chin in her hand and forced me to face her. I tried to pull away, wanting to watch now as Jack dropped the flogger and reached for a crop. Some other little minion nearby undid Alex’s belt and dropped his slacks. And oh, I wanted to see that.

The woman, displeased that I had not paid her proper attention slapped my cheek hard and I broke from my daze.

“Jack’s asked me to take care of you,” she explained, her voice cold. “While he’s busy.”

I nodded, quickly, trying to catch up with the script that seemed to be moving at fast forward. Alex was groaning. Not loudly, butt loud enough for me to hear. I really wanted to know was what Jack was saying to him. The burn of jealousy intensified, and I would have wept had the lady before me not forced my focus on her deep green eyes. Fake green, I saw immediately. Too emerald to be true.

To my horror, she released the cuffs and the bindings holding me in place. She was going to take me somewhere else, somewhere away from Jack. I pulled back from her immediately. No thought of what might happen. No consideration of who she was, who she might be. I could not leave Jack and Alex by themselves—even if they were “by themselves” in a room of people. I wanted to see how Jack touched Alex afterwards. Would he be gentle with him? Would he wrap Alex in his arms? That thought made me want to double over, my stomach clenched.

The woman was not someone to mess with. I should have understood that by the fact that she’d slapped my face within seconds of “meeting” me. She gripped my hair in her hand and pulled back, hard, and in seconds, she had assistants at her side, two men who crowded close to me. They didn’t touch me. But their sheer size was intimidating. I looked from her to the men and then back to her again.

“Jack has asked that we take care of you,” she said, and her voice was lulling now, as if she intended to quiet me, the way you’d soothe a spooked animal. “Will you come on your own?”

I looked at the men, looked through the gap between them to Jack and Alex, and I felt myself digging in my heels. Quite literally. I was going nowhere until Jack told me to. They could drag me out, and I’d cause a scene, and maybe that’s what people around here lived for, but I’d take that risk.

“Jack has to tell me that himself,” I said, and I saw a glimmer of something in the woman’s faux jewel eyes. A flicker of understanding. She touched one of the men’s shoulders and nodded, and he headed over to where Jack was now methodically cropping Alex. I could see the marks, the welts, and I felt a shudder work through me.

There was a hushed conversation out of my earshot, and then Jack leaned against Alex once more, and I knew in my head he was promising pain, more pain, in a moment. Then Jack was at my side, and the lady and her enforcers gave us space. “They’re to get you ready for me,” he said. “Don’t worry so much.”

Available from: Amazon UK | Amazon US and all other good booksellers.

Alison Tyler is the author of The Delicious Torment, the sequel to Dark Secret Love (both published by Cleis Press and Black Lace Books). She has edited anthologies for Harlequin, Plume, Cleis, and Pretty Things Press. Visit her at alisontyler.blogspot.com for kink and coffee.

Alison Tyler is loyal to coffee (black), lipstick (red), and tequila (straight). She has tattoos, but no piercings; a wicked tongue, but a quick smile; and bittersweet memories, but no regrets. She believes it won’t rain if she doesn’t bring an umbrella, prefers hot and dry to cold and wet, and loves to spout her favorite motto: You can sleep when you’re dead. She chooses Led Zeppelin over the Beatles, the Cure over NIN, and the Stones over everyone. Yet although she appreciates good rock, she has a pitiful weakness for 80s hair bands.

In all things important, she remains faithful to her partner of eighteen years, but she still can’t choose just one perfume.