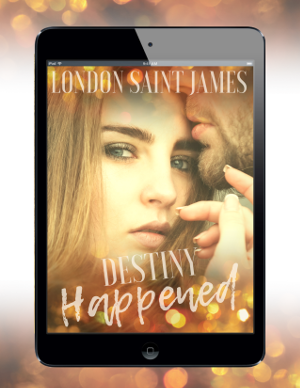 Of course, I noticed Mr. Shirtless. With a bod like his, who wouldn’t? But his hot-factor didn’t matter. What did? My asshat ex and the need to make him jealous. So, I strolled up to the panty-melting stranger as though I knew him and laid one on him, hoping said asshat would see I’d moved on just fine without him. Only, he never saw me kissing another man.

I spotted her—honey-blonde hair gleaming in the sun as she came my way. I’d flirt. Smile. Maybe get her number. I sure the hell didn’t expect her to toss her arms around my neck, mashing her body against mine, and kiss the ever-loving shit out of me. Then, she stopped. Stepped back. Blushed. Whispered “Sorry” and blended into the crowd. I never got her name that day. Or her number. However, fate had other plans and Destiny happened…again.

Pops quickly flipped a line of sizzling sausages with his heavy-duty tongs as I carried an oversized cooler past him. “Those better be more brats for the grill since these babies are sellin’ out fast.”

“I wouldn’t leave you hanging, old man,” I said, sliding the container next to the boxes I’d placed under the canopy a few minutes earlier.

He bobbed his head. “Know it.”

There was affection and perhaps a little pride in my papaw’s tone.

“I’ve got another couple of coolers to bring over, so we should have enough brats to get us through the rest of the day.”

While having a food booth at Oktoberfest was an annual money-raising activity, allowing us to give a nice sum to a local charity—as well as excellent advertisement for Caldwell Trucking and Repair—hauling stuff to and from our venue and fighting the traffic and crowds wasn’t my favorite thing.

Glancing around I asked, “Where’s Joe?”

“He called a little while ago. He should be here any minute now.”

Pops flipped another bratwurst. “Don’t give me shit, boy.”

“Just happy to see you giving in.” I chuckled. “It’s about time you moved out of the stone age.”

“Yeah, well,” he grumbled, “I miss the good old days when a person wasn’t reachable twenty-four-seven. When my ass isn’t planted in my office chair, then I’m out. No one gets the concept of being away and unavailable anymore. I don’t need to be interrupted all the time.”

I couldn’t help but grin at his usual rage against the machine. Everyone knew if Pops was out of the trucking office, odds were good, speaking to him probably wasn’t happening.

“Haven’t heard from him.”

“That asshole better not pull another no show. It’s his turn to do clean up.” With a shoulder lift, I swiped sweat from my face onto my damp, gray t-shirt.

I’d much rather work fifteen-hour days at the shop—which, let’s be honest, I did often so I could catch up on the paperwork end—than to deal with the daily vendor set up and nightly clean up.

“You know your brother, Kash.”

Shit… I’d be doing my younger brother’s job later because Crayten would do what he always did—leave me high and dry.

We were only two days into this four-day event, and I wasn’t happy. Adding to my piss poor mood was the damn heat. It might have been October, but it was still hot as hell and even hotter standing behind our commercial-sized stainless steel grill where I would eventually be to give Pops a break. But come on. Four days of organized chaos and three-hundred-thousand festival goers could drive a man to drink. Although, on a positive note, I didn’t have far to go if I wanted to tie one on. The entrance to the beer garden was only a few feet away.

“Hey.” Joe strolled up, man bun in place—hipstered out in his skinny pants, a blue shirt with red suspenders, and a big goofy smile on his bearded face. “Did you catch those bar wenches?”

We did our standard fist bump greeting. “I’ve been too busy hauling shit to notice anyone.”

“Joe”—Pops motioned with his tongs—“I’ll never understand why you want to do that crap to your poor ears.”

That was Pops for you. His grousing way of greeting one of our best mechanics while at the same time giving the guy crap about the shiny black plugs protruding through his lobes.

Joe tugged on his right ear good-naturedly. “All the ladies love my accoutrements.”

“Accoutrements is it?” My papaw snorted. “Fancy.”

“Thanks, Mr. Caldwell. I’m happy to help,” Joe said—humor in his tone. He glanced back at me. “Still have stuff in your truck?”

I reached over my shoulder and yanked my shirt up, tugging it up and off my head. “Appreciated. Just give me a sec.”

Balling the cotton material, I swiped the driest section over my sweaty chest and stomach, glad I’d thought to toss a couple of clean t-shirts with our shop logo onto the passenger seat of my pickup that morning. I’d need to put on a fresh one.

A section of the milling crowd parted, and a few whistles snagged my attention. No. The whistles weren’t directed at me. They were for some dark-haired woman who was tossing her hands in the air and shaking her ass.

I’ll admit, she was attractive in a Jennifer Garner kind of way. But the woman next to her, shaking her head and smiling—long, honey-blonde hair gleaming in the sun—was a fucking knockout. A knockout who looked my way. A knockout who stared at me, then glanced past me—eyes narrowing—her porcelain-doll face going serious as she started in my direction.

Maybe it was the way she held herself. The biting of her luscious bottom lip. The gentle sway of those shapely hips. Or maybe it was the hip-hugging jeans and white, scoop-neck, long-sleeved tee showing off all her curves that did it. But she had this combination good-girl-next-door with a hint of wild-in-the-sack vixen vibe going on.

Filthy images of what I could do to muss her up raced through my head at supersonic speed.

I was ready to give her my best smile. Flirt a little. Maybe get her phone number. And I was just about to do all of that when without hesitation she stepped up to me, popped up on her tiptoes, tossed her arms around my neck, pressed those soft, full tits into my hard chest and smashed her plush, pink lips against mine.

All right. I’d had my fair share of women hit on me, and do that shit hard, but a woman literally throwing herself against me and taking charge without so much as a hello? Well, that was a first. When it came to the fairer sex, I took the lead. Regardless, though, I wasn’t stopping her. In fact, screw introductions. I didn’t need any.

Groaning, my right hand grabbed the back of her neck—fingers tangling into the strands of her silky hair. My other hand, still holding my wet shirt, went to her ass and pulled her even tighter into me.

She made a little mew of sound which turned into a throaty moan—her smaller frame melting into me as I plunged my tongue into her mouth, tasting an explosion of cool mint and womanly desire.

Yeah. I was full-on frenching someone I didn’t know—deep penetration style—while in front of Pops, Joe, and the entire swell of weekenders at Oktoberfest.

Both my brain and body agreed. It was time to get down and dirty. This became apparent when all the blood I possessed rushed to my dick, and I ground myself into her pelvis. It didn’t matter where we were. It didn’t matter the woman in my arms was a stranger. Nothing in the world did but the feel, smell, and taste of her.

Awareness seeped into my ‘need woman now’ mindset when she let go of me and pressed a palm to my bare shoulder, attempting to push me away.

Definitely get her number became the thought overtaking me as she stopped our rigorous game of tonsil hockey and stepped back, breaking my hold.

Staring down into the most exquisite pair of navy-blue eyes, I was struck mute. That was new as well. I’d never before been tongue-tied over a woman. Not only was I silent, but it also seemed I lost my ability to move.

Part of me understood I probably looked like a complete dumbfuck, standing there in front of our booth with a raging hard-on, shirtless, and goddamned speechless, but I just couldn’t pull my gaze from her.

A rosy hue started at her chest, crawled up her neck, and swept across her cheeks. She placed her fingertips on her kiss-swollen lips, whispered “Sorry,” spun around, and took off like the devil and all his minions were on her trail.

Her leaving so abruptly snapped me out of my stupor, and all my faculties crashed back in place with a jolt to my system. Rebooting me.

All I caught was thin air and a peek of her shoulder as she blended into the crowd. 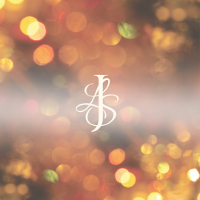 London Saint James has lived in many places but never felt ‘at home’ until she met the real-life man of her dreams and settled down in the beautiful Smoky Mountains of Tennessee. London lives with her husband and their fat cat who thinks he owns them.

As an award-winning, international bestselling author, London is living her childhood dream. She knew all the scribbling she did, that big imagination of hers, and all those clamoring characters running around in her head would pay off someday.

One Response to "Destiny Happened by London Saint James"