First up, can I thank Lucy for inviting me onto her web site to contribute to her series of ‘Filthy Friday’ blogs offered by authors of the ‘Smut by the Sea’ anthology.

My contribution to ‘Smut by the Sea’ is a story called ‘One Scoop or Two?’ and, yes, you’ve guessed, it features a lot of ice cream…and an equal portion of oral sex too! 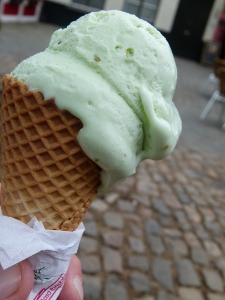 ‘Danatoni’s’, the ice cream parlour in my story is based on my childhood memories of another ice cream parlour, ‘Morelli’s’ in Broadstairs, a seaside town in the south east of the UK, also famous for its association with a rather more illustrious writer, Charles Dickens.  I love ice cream.  When I read through my story and came to the description of the character Darren, ”stood, goggle-eyed and drooling, gazing at the ice cream looking like a pervert let loose in the red light district of Amsterdam” I suddenly realised, oh my god, that’s me, I do that!  Darren returns with his girlfriend, Keeley, to the ice cream parlour he remembers from his childhood and that’s where the fun really starts.

These days you can get a cornucopia of varieties of ice cream and exotic flavours.  But back when I was growing up in the early 1960s there was no such choice.  There was the ice cream van selling ‘Mr Whippy’ (tee-hee, a name that has amusing connotations for a writer of BDSM erotica!), which came down the road I lived with its ‘Greensleeves’ jingle.  Now, what is it about ‘Greensleeves’ and ice cream vans?  What marketing man dreamed up the idea that, oh let’s play a Tudor ballad, that’ll get the kids flocking in?  The funny thing is it worked, as the sound of the jingle was a call to all the children on the street to rush out and buy a cornet or a strawberry Mivvi.  Aah, Mivvi’s – now there’s the classic ice lolly for you!

But the height of exotic ice cream experience then (this was before the days of those US interlopers Baskin-Robins with their new-fangled blueberry cheesecake ice cream) was a block of Wall’s Neapolitan.  I mean, it had three flavours, all in one block, how good was that?!  I remember that before it settled down into its classic combo of vanilla, strawberry and chocolate an early version had green ice cream, how amazing?  I suppose this was meant to be pistachio though I doubt if it had ever seen a real pistachio nut but it was green, so, hey, that’s ok.. Because of that, and to this very day, my favourite flavour is still pistachio. When I was last in Italy faced with an ice cream parlour in Sam Gimignano (the Tuscan hill-top town with all the towers) with an amazing range of flavours and boasting both that it made the best ice cream in Italy (an awesome claim) and also that Tony Blair frequented it on his many holidays in Tuscany (hmm, not so great a claim) I chose pistachio for that classic Italian gelato experience. 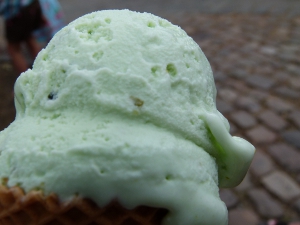 Sorry, I’m digressing.  Now, of course this was why Morelli’s was such an inspiring place for a kid.  Genuine Italian ice cream parlours were a pretty rare occurrence when I was growing up and this one was amazing with a choice of flavours that was mind boggling to a child brought up on Arctic Roll (hands up who remembers that!).  And of course, just like Danatoni’s in my story, Morelli’s made damned fine ice cream! This was clearly one of my formative childhood experiences, which is why I simply had to pay homage to it in my story.  So folks, will it be one scoop or two?

“You’ve been a good boy,” she smiled, “so I think I’m going to treat you to an ice cream.”  She picked a metal scoop up and cast her eyes across the coloured mounds of ice cream, “Hmm, what flavour? I know just the thing, the classic Italian ice cream, pistachio.”

She plunged the scoop into the pastel green mound of ice cream covered with chopped nuts.  She held the scoop over his crotch and looked him in the eye with a wicked gaze and then released the scoop of ice cream onto his cock.  He gasped and wriggled in the chair, gripping tightly onto the arms just as she had done.

“Hmm, I think we’ll have some whipped cream on that,” she said as she squirted oodles of cream from an aerosol can, “and some chocolate sauce,” as she squeezed a stream of syrupy brown sauce onto the ice cream, “oh, and some hundreds and thousands to decorate,” as she took a handful of the multi-coloured sugar strands and sprinkled them over the ice cream and chocolate sauce.

Darren sat there in ecstasy as he looked down on his erect cock smothered in the combination of ice cream, cream, chocolate sauce and sugar strands….