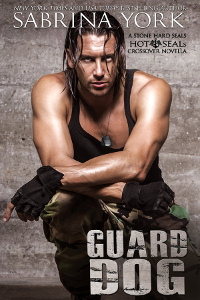 What if all your favorite military romance authors got together and wrote a series of HOT SEAL romances in the same world?

This is Cat Johnson’s HOT SEALS Kindle World. It’s an exciting opportunity for you to discover new authors writing in the genre you love in a world you know!

And if you become inspired to do so, YOU can write and publish a HOT SEAL romance in Cat’s world too!

Mason Steele expected to be a SEAL until the day he died. And he was. A pity they revived him. Now he’s been mustered out of the Navy and his life seems wholly unsatisfying. He misses the action; he misses the camaraderie; he misses being able to use his tightly-honed skills. He’s lucky to have snagged this job with GAPS—the Guardian Angel Protective Services—it provides some hope for his future. But the last thing he wants to do is babysit a spoiled heiress who is obsessed with the color of her nail polish and carries a Chihuahua in her purse.

But there’s more to Pansy Hightower than can be seen at first glance. She’s smart, sassy and determined to save the business her late mother built. She resents having a guard dog and does what she can to lose her muscular shadow. But when it becomes clear that someone is targeting her—perhaps for the same kind of fatal “accident” that befell her mother, she decides having the 240 pound SEAL with killer instincts and lethal hands at her back might be a good idea after all.

Until they share a kiss, that is. Until those lethal hands prove they have other talents as well. Talents that leave her breathless and wanting and weak. The last thing either of them wants is a relationship, but the scorching passion between them cannot be denied…even though it will undoubtedly spell disaster for them both.

“All right then.” Pansy’s surprisingly chipper voice cut through his dismal mood. It had been mortifying admitting his weakness, his failure, especially to her. It was something of a relief that she didn’t seem to understand the deep implications of his confession.

He dared a glance at her. Even bedraggled and tattered as she was, he wanted her. She shot him a bright smile. It made him glower. “All right then, what?” he muttered.

You’ll do? You’ll do? Irritation riffled through him. When she tipped her head and her ponytail swung, his ire blossomed.

“But I don’t know about the others.”

“We’ll arrange a meet.” It was standard procedure…when they weren’t on a covert job.

She put out a lip. God he wanted to suckle it. Maybe it would be better if someone else took over. He was far too attracted to her to keep a clear mind. “But I want you,” she said.

Again, her words made something hard and needy sizzle through his bowels. He knew what she meant. He knew she was talking about her protection and not some scalding, savage coupling in the big bed in the next room that was far too close to be successfully ignored.

He imagined he could smell her arousal in the air, which was ridiculous.

“No worries. I’ll be on your team. But we’ll have at least three others.” Two on days and two on nights. Although, if he had his way, she wouldn’t be going out again. Certainly not to clubs where he couldn’t guarantee her safety. On that note, he fixed her with a dark look. “We need to talk about security. You’re going to have to make some lifestyle changes until this threat is contained.”

“I have a business to run.”

“Is that what they call it? Partying all night with entitled socialites like Monique Dupree?” He didn’t mean to snarl it as he did. But it hardly mattered. She was utterly unaffected by his ferocity.

“Those entitled socialites are my customer base. More than that. They are my influencers.”

He had no idea what that meant. “Too many people. Too many blind spots. We need to keep you in controllable environments.” Like this hotel. Like this suite. That bed…

Again with the pouting lip. God. It was driving him crazy.

With a grunt, he pushed to his feet—ignoring the sharp string of yips this elicited from Ratacus—and prowled to the wall of windows, pulling back the curtains and peering out at the night in a pretense of assessing any potential hazards. Her suite was on the thirtieth floor. Doubtful anyone would enter from the balcony. Still, he checked the lock on the door. Probably wouldn’t hurt to install a door brace on the front door. He strode back to the foyer and jiggled the handle. Yeah, definitely a brace. He made a mental note of other upgrades the suite needed, of the things he needed to check. First order of business was to sweep for any bugs and check for hidden cameras.

He glanced over at Pansy and immediately revised his priorities. She was leaning back with her head resting on the sofa, her eyes closed. Her face was a cameo of perfection, but it was wreathed in exhaustion. First order of business was to get her to bed.

So she could sleep.

An ominous clicking sound and a sudden riffle of movement near his ankles captured his attention and he glanced down.

Lola, in her pink tutu glared up at him, her lip curled over impressively pointy teeth. Mason tipped his head to the side and met her challenging gaze with one of his own. It said: Really? Whatcha gonna do, Ratacus?

He probably shouldn’t have.

She lifted her leg.

And peed on his boots.

He shot her a contrite look. “Your dog peed on my boots.”

“She does that.” Pansy huffed a sigh and headed for the powder room to grab a hand towel. “One of the reasons I don’t date.” She knelt before him and mopped up the puddle.

He should have stooped to help her, but honestly, he couldn’t. He couldn’t move to save his life. Because there she was, kneeling before him, with her head so close…

A scintillating thought, a captivating vision, a scalding need rose like the hydra. That, and a lowering realization.

He was a pervert. A goddamn pervert.

She was cleaning his fucking boots for God’s sake.

“You need a shower.”

Right. No idea why he blurted that.

Well, maybe one idea. He desperately needed her to stand. To move away, before he lost his mind and did something insane and necessary, like pull her closer.

She looked up at him. He forced himself to step away, he had to. Or his erection might have brushed her cheek.

And that would have been a disaster.

“Yeah. Um. You’re all banged up. We should get some antiseptic on those scrapes. Do you have a first aid kit?”

She said nothing so he glanced at her. That she was staring at his crotch sent a bolt of lightning through him. Her tongue peeped out and she lifted her gaze. He could have sworn he saw something simmering there. He tried mightily to ignore it.

Surely it wasn’t what he thought. Imagined. Ached for.

She shook her head. “I have no idea.” Nearly a whisper.

“I’ll call the concierge.” This was a penthouse suite. Surely there was a concierge. “Why don’t you go…um, clean up and I’ll call down for something.”

She stood slowly, holding his gaze. Something about her, her energy, her intensity, had shifted. It made him antsy. It made him restless. It made him hungry. She turned around—his heart sank—but then she said, softly, with a tentative quiver to her voice, “Could you unzip me?”

She peeped at him over her shoulder. Her eyes, so beautiful and blue, bore into his. “I can’t do it myself.”

He was certain she could. She was a grown woman. She’d been dressing—and undressing—herself for years. But he couldn’t refuse. Not when she asked so politely. “S-sure.” Hopefully she missed the stutter.

She could not have missed the fact that his fingers shook as he tried to grasp the tiny teardrop at the top of her zipper. Why the fuck did it have to be so tiny? It took forever for him to make the long journey down her spine, partly because the damn zipper kept catching and partly because he really wanted to savor the journey.  As it advanced, more and more of her creamy skin was exposed. He wanted nothing more than to place his palm on her, to stroke her. To feel the heat of her skin against this.

But she’d asked him to unzip her. Not make a move.

It was a damn good thing he’d developed indomitable willpower as a SEAL. Denying himself things crucial to his being—air, water, food—was par for the course in their training.

This was by far the most difficult denial of all.

When he reached the bottom of the zipper, when a hint of a crease at the base of her spine was exposed, he stepped back. Though it cost him. “There,” he said.

Jesus, God. He was going to heaven for this.

His restraint was nothing short of a penance.

But then…she shifted her shoulders and the scrap of material drifted to the floor. She shot another glance at him, something that was too much of an invitation to be misunderstood or misconstrued, and, wearing nothing but her skimpy bra and panties, padded into the bathroom.

Available from: Amazon US

Hot SEALs Release Party—Join the fun and enter contests, read blurbs and excerpts and discover more about the Launch authors!

Her Royal Hotness, Sabrina York, is the New York Times and USA Today Bestselling author of hot, humorous stories for smart and sexy readers. Her titles range from sweet & sexy to scorching romance.  Visit her webpage at www.sabrinayork.com to check out her books, excerpts and contests. Get updates and alerts from Sabrina here: HotSheet Sign Up.