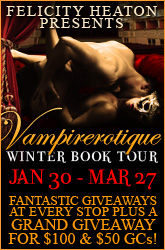 Interview with Varya from Enslave by Felicity Heaton

It’s great to be here today as part of my Vampirerotique Winter Tour celebrating the series and my latest release, Bewitch.

A succubus with several centuries of life and even a fae king notched on her headboard, Varya is all about fun. She embraces everything her species adores—passion, love, debauchery and decadence—but has learned not to take things too far over the past century. Her kiss is enough to melt most men, and sex with her will kill all but the strongest. Having grown tired of killing men with her passion, she has focused on gaining sustenance through less lethal means. She’s always looking for a party, but like any good succubus, she follows the rules of her clan, that is until she decides to take a risk and teleport into Vampirerotique during one of the performances. When the glamour keeping her invisible weakens, alerting any vampire over several centuries old to her presence, Varya ends up locking eyes with a sensual vampire who heats her blood and sets body on fire, but who is forbidden and might just be the end of her—Andreu.

Read on to find out more about Varya from the succubus herself. 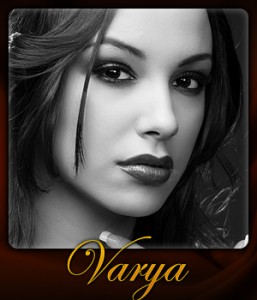 FH: I have a very sassy succubus here with me today. Because she’s a fae, and a fae’s real name gives people power over them, I can’t use her real name. I’ll be using her nickname, Chica. So, I have Chica here with me today to talk about her book, Enslave. Firstly, can you tell us a little about yourself?

CHICA: Thank you for understanding about the name thing. A lot of people don’t get it. When it became clear that I would be at Vampirerotique with Andreu for a while, I decided to choose a name for myself so others knew what to call me. Andreu always calls me Chica, so I chose that as my name. I’m a succubus and, to be honest, I had grown a bit tired of life. My friends said it was something all succubi went through and I was hopeful that it was and I would find my enthusiasm again. It probably seems so silly to hear that I was a succubus without any drive to feed through sex, but I was. It can get boring after several hundred years. Of course, then I met Andreu!

FH: How did you meet and how did you feel about him initially?

CHICA: Oh, he’s so hot. Isn’t he? The moment I set eyes on him, I knew I had to have a taste. He’s sex made flesh and just gorgeous. I know he wears shadows and that I should have stayed away from him, but boy am I glad that I didn’t. That man knows how to do naughty. *purrs* He is made by the gods just for me. I swear.

FH: So, you’re saying that you liked him?

CHICA: Yes, I guess I am. Sorry. I get a little excited whenever I think about my naughty vampire.

FH: That’s good though. He really seems to have restored your lust for life. You mentioned that Andreu wears shadows. That means he has a black aura and you cannot read his feelings, and by clan law you’re not allowed to interact with him. Was it hard for you at first?

CHICA: Very. I tried to stay away from him because I wasn’t sure why my clan believed that shadowed males were dangerous. When I found out why, I tried even harder to keep away, but something about Andreu kept drawing me back to him. I just couldn’t resist him. I didn’t care if I was risking my life. I had to keep coming back for another taste. I wanted him so badly.

FH: And in the end you got him, but it wasn’t easy on either of you. How has life been since the events that happened and brought you together?

CHICA: I’m becoming accustomed to life at the theatre. Antoine lets me watch the practices where only young vampires are on the stage. They can’t sense that I’m different so it doesn’t unsettle them. Andreu watches the performances with me and things tend to get a little hot and heavy. *giggles* I don’t think either of us can help ourselves. I’ve been growing used to being around Payne and the others, and I think the older performers at the theatre are getting used to me being around too. Victor always runs in the opposite direction whenever he sees me though. Andreu thinks it’s funny.

FH: Speaking of thinking things are funny, I’ve heard from some of the other women at the theatre that you’ve formed a sort of troublemaking pack with Snow.

CHICA: Snow is a charmer, and he’s definitely our leader. Don’t let anyone tell you differently. He’s naughty and has a very wicked streak when he’s bored. You should see him taunt his brother. I swear, if any one of us tried to do that to Antoine, the aristocrat would have our heads. If it’s Snow and Sera annoying him, he just takes it in his stride. We have some new recruits now too. Callum has finally convinced Kristina to move into the theatre. All of us women have vowed to keep her safe. I think Snow will lead the protect-Kristina pack too. He always takes care of us ‘females’. I think he does it so we’ll read to him and keep him company while the men are busy with the business.

FH: Snow does like company and I’m glad that he has you all to stop him from being bored. I couldn’t imagine what he goes through being stuck in the theatre, but then he’s not alone in that anymore. I suppose we’ll be seeing more of you in other stories in the series?

CHICA: Oh, absolutely. I intend to cause as much trouble as I can and that means I’ll be popping up all over the place!

FH: Sounds like you’ll be having lots of fun. I’ll finish on a question I ask all interviewees. Describe yourself in one word?

FH: That is very apt and suits you so much. Thank you for meeting with me today and chatting.

CHICA: Thank you for having me! Who are you interviewing next? Andreu?

FH: I’ll be interviewing your ‘naughty vampire’ later. I have to interview Payne next.

CHICA: Oh, that should be interesting. He’s been in a terrible mood this week. I don’t think he’s getting enough, if you know what I mean.

FH: *laughs* I’ll have to ask him about it. Catch you later, Troublemaker!

FH: I can see that interviewing Payne isn’t going to be fun at all.

I hope you have all enjoyed this insight into Enslave and life at Vampirerotique through the eyes of one of the sassy heroines!

Read more about Enslave below, and visit my site for links to all the retailers and a hot excerpt: 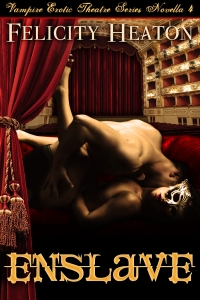 His determination to succeed in business has left no room in his life for love. Now, a beautiful and deadly succubus has teleported into his dark, decadent world and is in danger of enslaving his heart.

The moment their eyes meet, Varya knows she cannot have the exotic dark vampire who sets her pulse racing. His shadowed aura marks him as forbidden, but the hungers he awakens in her are too intense to resist—she must have a taste.

When an erotically-charged kiss ignites their soul-searing passion and reveals something dangerous about Andreu, will Varya leave forever or will she dare to risk all in pursuit of something she thought was beyond her reach? 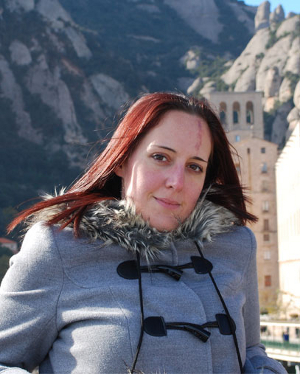 If you’re a fan of paranormal romance authors Lara Adrian, J R Ward, Sherrilyn Kenyon, Gena Showalter and Christine Feehan then you will enjoy her books too.

In 2011, five of her six paranormal romance books received Top Pick awards from Night Owl Reviews, Forbidden Blood was nominated as Best PNR Vampire Romance 2011 at The Romance Reviews, and many of her releases received five star reviews from numerous websites. In 2012, she received the GraveTells Author of the Year Award and her vampire romance novel, Heart of Darkness, was selected as a 2013 Epic Ebook Awards finalist in the paranormal romance category.

If you want to know more about me, or want to get in touch, you can find me at the following places: