Oh No She Didn’t!

Oh no I didn’t?  Oh yes I did!  I wrote Adam and Sheree’s Family Vacation: a book so vile, so filthy, so taboo that it was banned by Amazon and many other retailers.

You’d think I’d have learned my lesson.  Amazon is the world’s biggest seller of ebooks, right?  If they won’t carry it, isn’t that like throwing months of hard work down the drain?  Wouldn’t you think a clever, business-conscious writer would pack it in and write something a little tamer?

Well, I guess I’m an idiot because… I wrote another one. 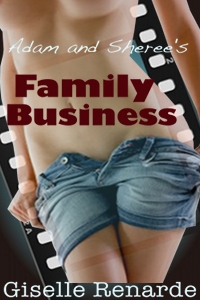 Well, there’s an easy answer: because they’re siblings. And that’s just not permissible.

Remember when Flowers in the Attic came out and everyone in your class at school read it before the parental units found out why the kids always had their faces shoved in a book?  Is Amazon now the scolding parent we writers are looking out for over our shoulders while we work?

And, speaking of Flowers in the Attic, why is Amazon totally cool about carrying a popular incest book by a bestselling author, but they won’t carry books by low-grossing writers like me (and maybe you, if you’re an author too)?  Who gets to dictate what constitutes literary merit? Why does explicit fiction get so brutally castigated? Can’t a book be smutty and thought-provoking?

These are the questions I ask myself while cutting coupons and praying my rent cheque doesn’t bounce.

Sibling incest is an uncomfortable topic, but that’s why so many readers find it titillating.  The more Big Daddy Amazon says YOU CAN’T READ THAT, the more we want to.  Same goes for writers.  Tell us we can’t explore a topic, and going to write the holy hell out of it.

Giselle Renarde is a queer Canadian, avid volunteer, and contributor to more than 100 short story anthologies, including Best Women’s Erotica, Best Lesbian Erotica, Best Bondage Erotica, and Best Lesbian Romance.  Ms Renarde has written dozens of juicy books, including Anonymous, Ondine, and Nanny State. Her book The Red Satin Collection won Best Transgender Romance in the 2012 Rainbow Awards. Giselle lives across from a park with two bilingual cats who sleep on her head.