When the possibility of fulfilling a fantasy is presented, sometimes it can be overwhelming. We have to wonder if it’s what we really want. If we even dare to accept the offer. Depending on what the fantasy is, we might even be afraid to take the chance on bringing it into the real world.

In my Ellora’s Cave Quickie Blow Out the Candles, Tracy has fantasized about her friend Darin since college. And as the years have passed, her fantasies have expanded to being dominated by him. She has never dared to act on those fantasies before because she’s a little afraid of her own submissive side, but now she’s ready to try.

Darin confesses he has fantasized about Tracy as well but has been worried about dominating her. He is a Dom, but isn’t ready to be Tracy’s Dom quite yet. He is, however, ready to consider acting on the fantasy.

Sometimes when you confess your fantasies, you find more than you expect. And it can be better than you imagine.

Contest: Have you ever acted on a fantasy? Answer below. (You don’t have to say what the fantasy was, just yes or no…) One commenter will win a PDF copy of Blow Out the Candles.

You can find Blow Out the Candles at Ellora’s Cave, http://www.jasminejade.com/p-10318-blow-out-the-candles.aspx. Find out more about Karenna and her books on her website, http://www.karennacolcroft.com. 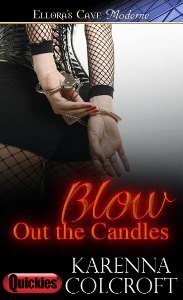 For years Tracy has lusted after her friend Darin, but has never dared act on her craving. She’s always been a little afraid and a lot excited by his dominant tendencies. But when Darin reveals the desire is mutual, a dinner invitation quickly turns to something more—and Tracy is ready and willing to submit.

His fingers tightened in her hair and he began to move her head. She allowed it, knowing he wanted her to suck him in a way that would make him come. He had to be close.

When he came, he did so without a word. He bucked, pushing his cock farther into her mouth, and his hand clutched her hair still more tightly. A sudden spurt of semen filled her mouth and she swallowed reflexively, tasting the sweet salt. Another spurt followed and then another, and she drank it all down triumphantly.

“I wanted you to.” She stood and smiled. “You’ve gotten me off more than once. This time was your turn.”

“I wanted to come in your cunt.” He sounded almost angry. “You ruined my plans. Do you know what happens when someone ruins my plans?”

“You fuck their brains out?” she asked hopefully. She doubted that was what he intended and her heart sped up at the possibilities. She didn’t know what she was in for now and that excited the hell out of her.

“Eventually.” He grasped her wrist and yanked her toward him, falling backward onto the bed at the same time. She landed on top of him. His cock began to harden again between them and she wriggled against it until he stopped her with a sharp smack on her ass. Startled, she looked at him. “First I spank them,” he said.

More moisture gathered between her legs and sparks slid along her skin. She’d never let a man do something like that to her and wasn’t sure she wanted it. But part of her was clearly excited by the idea. “What if I don’t want to be spanked?”

He smacked her again and she cried out. “I don’t remember giving you the choice. If you want me to stop just say the word.” He stroked her hair. “The correct word this time. I won’t do anything you don’t want. If you don’t tell me you don’t want it, I’ll have to assume you do.”

“I thought you weren’t going to punish me tonight.”

He chuckled. “I wasn’t. Then you took initiative one time too many. This isn’t about you doing what you want, Tracy. This is about you giving up control to me. If you’re willing. I asked you about limits; you gave me none. Do we need to stop now and renegotiate?”

“You make it sound like a business arrangement.” She squirmed, trying to dull the pulsing between her legs. She wanted him too badly to stop and discuss anything.

“In some ways it is. In fact, if you decide you want more after tonight, we’ll have to do a written contract to make sure there are no misunderstandings and nothing gets forgotten. And yes, I’m serious.” He smacked her again, more lightly this time. “You made me come when I didn’t want to, and that has a consequence. Are we stopping now?”

She took a deep breath. She could stop him if she had to. Right then, she had no desire to stop him. She wanted to finish what they’d started. “No. Don’t stop.”

She waited for his palm against her ass again but he didn’t administer another spanking. Instead he caressed her as she lay against him. The gentle touch surprised her and added to her need to have him inside her again. She squirmed and tried to move into position to take him into her cunt but he immediately wrapped his arms around her and held her still.

“I’m enjoying this too much,” he said. “Don’t worry, you’ll have exactly what you want, but first I get what I want.”