Does it Add Up? The Enduring Appeal of the Younger Lover

Love affairs between older women and younger men has been richly mined in fiction, both in mainstream and erotic romance (and elsewhere – look at the success of TV show Cougar Town). With good reason: a significant gap in years can add tension and a dynamic that isn’t present when lovers are peers. And like it or not, there is still a stigma attached to these relationships; you only have to look at the media fascination with high profile women like Madonna and Demi Moore who have a penchant for men young enough to be their sons. Yet, the same cannot be said of the fellas. It is only when the men stray into bordering-on-the-if-not-out-and-out illegal that the press have a field day. 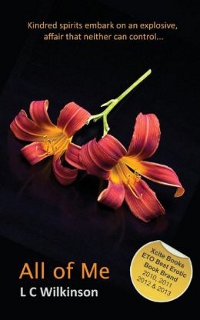 It’s often said that writers bring a little of themselves to characters, and I would agree. In my early thirties, I had a brief affair with a man eleven years my junior, and funnily enough at the same time my would-be husband was dating a woman twelve years his senior. My fella and I were born within a year of each other, but we have spoken about the synchronicity of these affairs and what we found appealing about our respective beaus of that time. Also, my mother married a man ten years her junior in the 70s; a period when it was much more risqué than it is today. So, perhaps it was inevitable that at some point in my writing life I would create a character who falls in love with a much younger man.

Flick, my leading lady in All of Me is fifteen years older than my love interest, Orlando, and because she is an actress, and a reasonably successful one at that – she has played a major role in a long-standing soap opera just before the main action of the novel begins – the pressure on her is, arguably, stronger than those whose profession doesn’t thrust them into the media spotlight. And fifteen years is officially a generation, so whilst it would be unusual for her to have had a child of a similar age to Orlando it is not inconceivable (sorry – couldn’t resist that one). In fact, Orlando’s step-mother is only a couple of years older than Flick, which adds to Flick’s insecurities about her age, the appropriateness of their relationship and so on.

On top of this, Flick is nudging forty. An uncertain age for most women; an age when the mind and sexual desire is enriched by knowledge and experience, but the body (for most of us, those of us who do not have access to personal trainers, stylists, top class surgeons and so forth) is beginning to show the first signs of wear and tear. There’s an expression in the theatre that suggests there are few roles for actresses between Ophelia and Gertrude (from Shakespeare’s Hamlet). While there are signs of positive change in the industry, with actresses like Julia Roberts, Cameron Diaz and Meryl Streep, as powerful and box-office attractive as their younger colleagues, if not more so, decent, sexy roles for women in their forties and beyond remain thin on the ground. Flick is fully aware that her days as the foxy lead are numbered, but she is too young and too attractive just yet to play the crone.

To stand naked before Orlando is hard for her – there are other reasons too, but to talk about them here would be to talk spoilers. Like many of us, she’s a little insecure about her body; she sees the flaws before the beauty. Orlando, meanwhile, worships her; her curves, her less-than-perfect hips and breasts, the small bump at the top of her nose, the result of a break as a child. As a part-time model he is surrounded by women defined by society as the most desirable (and very young women at that), and yet he is not interested in them. Flick is intriguing; she spellbinds him as much as he does her. If not more so. He is the predator, not Flick.

This was deliberate on my part. I didn’t want my lead to be a cougar in the usual sense of the word. It’s not that I think these women are unappealing; quite the contrary. I think they are admirable in so many respects: if young, firm flesh is your thing, then why not? Consenting adults and all that. No, I wanted the age difference to be a problem for Flick, but not for Orlando. In the past, I’ve written about the ridiculous and insulting way that older, beautiful women are spoken about. Remember all the brouhaha over a seventy-year-old Sophia Loren appearing in the Pirelli calendar?  One of my pet hates is that phrase ‘looks good for her age’. Why can’t someone just look good? Of course, forty looks different to twenty; but one isn’t necessarily better than the other. Because in the final analysis, where matters of the heart are concerned especially, age doesn’t matter. Passion is passion, love is love, no matter what a person’s age. Desire isn’t about maths. Age is just a number. Orlando knows this from the outset; it takes Flick a little longer.

All of Me is published by Xcite in paperback and e-book formats. You can buy the book here and here.

To find out more about L. C. visit her site – www.lcwilkinson.com – for news and freebies. Or follow her on Twitter: @ScorpioScribble

Or become a friend on Goodreads.