The very first story I published online was about vampires who turned out to be angels. I have always seen a connection between vampires and fallen angels and I’ve explored it quite a bit in my writing.

In these stories you’ll find a vampire and an angel but there is no connection and whether or not this angel is fallen depends, I guess, on the way you look at it. He’s definitely an insatiable monster but he’s still fighting on the side of the angels in the ultimate war of good and evil.

As well as vampires, I’ve had a fascination for paranormal beings of all kinds, especially shifters. The shifter in my collection is a werewolf. He’s in a bit of a mess emotionally and I’ve concentrated on that, rather than the  usual tormented soul of the monster thing. He’s definitely tormented but it’s the hormones.

There has always been a connection in mythology, I think, between vampires and werewolves and they have often been spoken of in the same sentence. They go together like nuns and bishops, vicars and tarts, apple pie and cream. I wonder why? There’s not much of a similarity. Apart from the fact they eat people.  Vampires can’t walk under the sun (NO not because they sparkle), but werewolves can. Werewolves only change at full moon, vampires can at will. Werewolves are mangy animals, vampires sexy and sophisticated.

I think the reason they are put together is because they appeal to our higher and lower instincts. Yes, the appeal is sexual, of course it is. Why else would we flock to see man/animals tear people apart? Because they’re sexy. The violence is sexy. The anticipation is sexy. And I don’t need to explain in what ways vampires are sexy… do I?

Vampires, I think, appeal to our sense of the aesthetic. Eternally young and beautiful. Refines ladies and gentlemen who drink wine from crystal goblets and wear beautiful suits and flowing gowns. The men are all slightly effeminate, with pale skin and long hair and the women are femme fatales. Sex on a plate.

Werewolves, on the other hand are animals, plain and simple. They appeal to our more base and carnal desires. The ones that want to be thrown on a bed and ravished. Hot breath on our bodies, huge penises thrust between our legs and the sense of danger that the teeth nipping our skin might just tear out our throats.

Anyway, that’s me. I’m a very sensuous and rather Freudian person. Everything boils down to sex in the end. 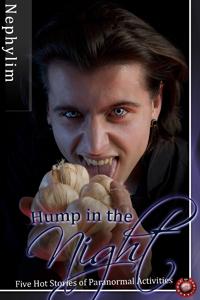 Aster is a vampire looking for someone. When he finds Kia his plan is to fuck him and drain him, but Kia has other ideas. Recognising Aster as the man he’s been waiting for, he turns the tide and seduces him, shocking him with secrets from the past. Together, they enter into an encounter that blows their minds and changes their lives forever.

Lucien is a werewolf. He’s always known he’s different. Definitely not an Alpha like his father. More akin to the bitches than the muscular Beta’s or lithe hunters he finds himself drawn to. When the enigmatic lone wolf arrives, with his pure white hair and ice blue eyes, Lucien is lost at first glance. After a burning hot dream he finally submits to the dominant male destined to be his mate for life.

Dema and Meri’el are an unlikely coupling. In the final war against good and evil they find themselves on opposing sides. Dema the demon and Meri’el the son of the King of Angels. Drugging each other with their bodies they unleash the primal fury of their true natures and rock the foundations of the earth and the heavens.

Grey doesn’t believe in curses. When he uncovers a cavern deep under the mountain feared by the villagers as a faery tomb, he scoffs at the superstition, until he meets a stranger who lures him into the wood. A steamy encounter in a forest glade has him wondering if being cursed is such a bad thing after all.

Shay is mourning the death of his soul mate, tormented by the fact he’d never told him how much he loved him. A knife in the back in a dark alley steals his chance to finally prove his commitment, until ghostly whisper in the same alley leads to a night of passion and the second chance both men crave, to finally find peace.

And then… wolves do not mate gently. We do not know how. One minute he’s licking me gently, and the next he’s leaping off me, turning me onto my stomach and sliding his claws into my hips. I struggle and howl but, before I can do much I feel his weight on my back and then…

He thrusts into me, deeply and powerfully. I howl again, throwing back my head and releasing the frustrations of eighteen years’ self-inflicted celibacy. My teeth descend, my claws raise a cloud of feathers from the bed and my tail whips his face as he pumps, hard and fast. My dick, swinging beneath me sends sparks into my head where it brushes the bedclothes, and his claws penetrating and retracting from the flesh of my hips only heightens the experience.

Five stories of the paranormal, designed to thrill and tease the senses and to challenge all you’ve ever been told about the creatures that go Hump in the Night.

Nephylim was born into a poor mining family in the South Wales Valleys. Until she was 16, the toilet was at the bottom of the garden and the bath hung on the wall. Her refrigerator was a stone slab in the pantry and there was a black lead fireplace in the kitchen. They look lovely in a museum but aren’t so much fun to clean.

Nephylim has always been a storyteller. As a child, she’d make up stories for her nieces, nephews and cousin and they’d explore the imaginary worlds she created, in play.

Later in life, Nephylim became the storyteller for a re enactment group who travelled widely, giving a taste of life in the Iron Age. As well as having an opportunity to run around hitting people with a sword, she had an opportunity to tell stories of all kinds, sometimes of her own making, to all kinds of people. The criticism was sometimes harsh, especially from the children, but the reward enormous.

It was here she began to appreciate the power of stories and the primal need to hear them. In ancient times, the wandering bard was the only source of news, and the storyteller the heart of the village, keeping the lore and the magic alive. Although much of the magic has been lost, the stories still provide a link to the part of us that still wants to believe that it’s still there, somewhere.

In present times, Nephylim lives in a terraced house in the valleys with her son and her two cats. Her daughter has deserted her for the big city, but they’re still close. The part of her that needs to earn money is a lawyer, but the deepest, and most important part of her is a storyteller and artist, and always will be.