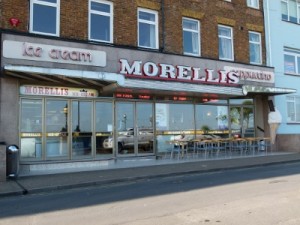 A few months ago when Lucy kindly invited me onto her site to talk about my story ‘One Scoop or Two’ in the Smut by the Sea anthology I contributed a blog about the inspiration behind the story.  The story is set in the Yorkshire seaside town of Bridlington and involves a lot of ice cream and a fair amount of oral sex!  But the ice cream parlour was inspired by one I remember from my childhood called Morellis in Broadstairs in Kent. 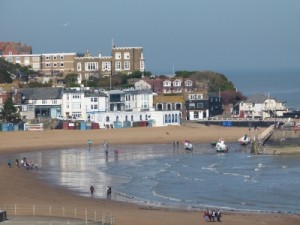 Well, last week I visited Kent for the first time in a number of years, met up with an old school friend, visited some old haunts and went to a football game (Yay, come on you Gills! – that’s Gillingham FC to you, top of League Two as I write).  Of course Broadstairs featured highly on my itinerary and naturally the opportunity to visit the ice cream parlour of my childhood memories could not be missed.

Yes, I went to the Morellis ice cream parlour.  Was the ice cream as good as I remembered it?  Hell, yes, I should say so!  I had a double cornet with coffee and coconut ice cream……and it was awesomely delicious.  And Broadstairs itself was just as nice and quaint as I remember it too, so it was a great day out. I should stress I didn’t get locked into the parlour like Keeley and Darren in my story….hmm, a shame really!

I hope you’re all gearing yourself up to go to the ‘Smut by the Sea’ event in Scarborough on 22nd June.  I’m certainly looking forward to it.  I’ve offered to do a reading from my ‘One Scoop or Two’ story in the evening and during the day readings from my erotic novel ‘Adventures in Fetishland’ and launching the print version of it out at the same time.  The latter could be interesting as I’m inviting a couple of special guests to read for me (all will be revealed nearer the time).  It’ll be the first time I’ve read in front of an audience of more than one or two so I’m a bit nervous, but I reckon it’s going to be a lot of fun!.  So, hope to see you all in Scarborough in June.

Get your copy of Smut by the Sea Volume 1 here – Volume 2 coming soon!

Slave Nano lives in Yorkshire in the United Kingdom, not far from the seaside town of Bridlington!  He works full time and juggles his writing with this.