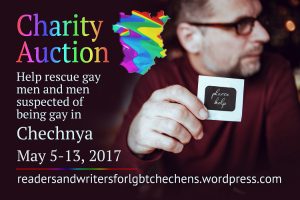 You may have heard the news coming out of Chechnya, part of the Russian Federation, where police are kidnapping gay men (and those they perceive to be gay) and taking them to camps for torture. Several state-sanctioned murders have also been reported.

Readers & Writers for LGBT Chechens is raising money for organizations working directly with gay men and other persecuted LGBT people in Chechnya and the northern Caucasus.  We do this through direct donations, donating royalties to these charitable organizations, and an online auction that runs through Saturday, May 13, at 12 noon CDT (6 pm BST and 3 am Sunday morning AEST).

MM romance and YA author Kaje Harper has donated a complete ebook set of her Hidden Wolves paranormal romance series to the auction. Here, she talks about why she got involved:

Why I Got Involved in Helping LGBT Chechens

This feels like the year of injustice. Not that the world hasn’t always been a place where people suffered unjustly for who they are and who they love. But now, more than ever, those who represent me on the national and international stage are betraying their responsibility to speak up for rights, for compassion, for human worth and dignity.

This is also the year of the individual. So many of us, in a thousand venues, lifting our individual voices, volunteering, contributing, protesting, speaking up, trying to fill the needs that the wealthy and powerful are abandoning.

LGBTQ Chechens are not the only folk on the rainbow spectrum in grave danger if they’re discovered, but in some ways they represent the darkest of our current fears. These men have been taken, put in camps, disowned by their own families, abused, tortured killed, for being gay.

With a few exceptions (Bless you, Angela Merkel) our governments have remained silent. The leader of Chechnya has stated there are no gay men in the whole region to deserve rights, and the loud response of logic, of compassion, of protest — a hundred nations who should be speaking out with the clear understanding, shouting that hate does not erase 5% of the population… echoes only in our heads. That lovely sentiment of “never again” is shown to be only paper words to our leaders.

We can’t save them all privately. Donations can’t move 5% of the population of a region to safety, nor even the much smaller fraction who might come out and request it. But every person we can move is one fewer lost to hate. Every voice that is raised increases the chance that we might shame others with more power to speak up internationally. The worst crime is when this kind of human rights abuse happens in silence, and the most painful is to know we could have saved lives but turned our backs.

So why participate in Readers & Writers for LGBT Chechens? Because I can. Because it gives me one more chance, beyond all the other things I do, to make a difference. Because it is a rainbow splash of hope, in a dark year that needs it. Because even one man spared torture and death would still be worth it.

And last, perhaps least, but worth remembering – if we do not speak up now, whose voices will be raised when they come for us?

I have two LGBTQ kids, and I would pray that if we lived in Chechnya, and some other author lived here, that author would be trying in ways simple and creative, to fight the evil of violent bigotry, whether it impacted them or not.

We are one world, and none of us are a solitary, untouched island within it. We live and die, together. 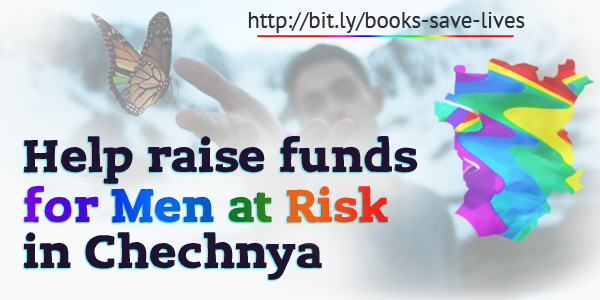 If you’re an author or artist who would like help out, please sign up at Authors & Publishers for LGBT Chechens. There, you can also find answers to frequently asked questions about royalty donations, the charitable organizations that are helping LGBT Chechens, and more.

Kaje Harper is an M/M romance author, writes a little YA, and moderates a YA LGBT Books group on Goodreads.