How The Gate Came To Be by KT Grant 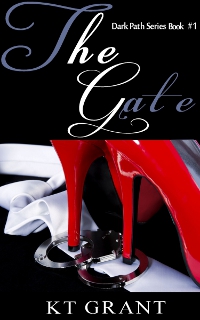 The idea for The Gate started as most of my projects do- with a specific character. This character happened to be Maxwell Crawford, the hero. I came up with the idea for Max back in the spring of 2012. It all started with a name that popped into my head- Maxwell Crawford. Those two words that created a name for a phantom character stuck with me for a good month or so as I built Max’s personality in my head. I knew he would be handsome and rich and live in New York City. I also know he would enjoy kinky sex and would own a sex club. The next part was coming up with a worthy heroine for Max, who would eventually become Erika Walsh.

I started writing The Gate the day before Memorial Day 2012, and less than 2 months later I had finished the first draft. I knew right from the start I was going to self published The Gate in what would be the first book in the Dark Path series. I took another year polishing and editing and revising The Gate, and then working with some fabulous editors who made The Gate shine.

The process of self publishing The Gate from choosing the cover to working on edits, as well as uploading to online vendors and doing promotion has been a fun and rewarding experience. To think it all came to be because of a name that popped into my head one spring day.

The Gate (The Dark Path Series #1)

Erika Walsh has carried a torch for Christopher Milton, heir to her father’s publishing empire for years. After one steamy make out session she begins to wonder if it might develop into something more. But when M. L. Crawford, better known as Max, her father’s publishing rival, seeks her out at a society event, she’s drawn to his magnetic charisma and powerful demeanor. Their verbal bantering and innuendo laced overtones stir feelings she never knew existed, and soon Erika is consumed with knowing the real man under Max’s restrained public façade.

Erika’s sweet nature and naivety excites Max to near madness. He wants to train her in the art of seduction and make her succumb to his every wish and command…as his perfect submissive. Yet, Christopher is determined to keep Erika from becoming the latest victim of Max’s sinister sexual hungers. He knows all too well what Max hides in his black soul and will stop at nothing to reveal all of Max’s secrets in order to protect the one thing he holds dear above all else- Erika.

Max’s dark desires scare yet arouse Erika, as he opens her eyes to a new bold world full of passion and ecstasy she never imagined until him. But the biggest question remains: Is Erika’s craving for Max just an illusion that transpires behind the walls of The Gate?

KT Grant is a self-proclaimed eccentric redhead who not only loves to read a wide variety of romances, but also loves writing it. Under her alter-ego, she is a well-known book  blogger who doesn’t shy away from voicing her opinion. A proud native of New Jersey, KT is multi-published and writes Gay, Lesbian and Straight romance. KT has been a top ten best-selling author at Amazon, as well as being a multiple All Romance Ebooks best seller and a Night Owl Reviews Top Author Pick.

KT loves to hear from readers. You can drop KT an email at ktgrnt@gmail.com.