First the basics, I’m married to my college sweetheart and have 3 wonderful children. I have a boxer who is convinced she’s a lap dog, a senior citizen cat who demands her needs are met immediately and a ball python. My passions…hmmm, tattoos (I have 7), classic cars and music (hard rock to blues).

Unexpected Find is my debut release with Ellora’s Cave. When not writing, I work as a chemist in a pharmaceutical lab.

The idea for this series grew from my passion for animals (big cats in particular) along with the influence of Laurann Dohner’s New Species series and Gena Showalter’s Lords of the Underworld. I was fascinated by the idea of having the “demons” sharing the Lords bodies and I love the passion in EC’s books. The two combined into the Royals, multi-feline shifters who house animal spirits and are doubly driven by their primal instincts.

I never actually meant to start writing but Rafe and Jasmine’s story just wouldn’t leave me. I had to write it.

My road to publication was a blessing I didn’t expect. My story was picked out of the slush pile at Ellora’s cave and the rest is history.

I’m currently splitting my time between book 3 of the Royal Pride and book 1 of a new series for Ellora’s.

No Muse. And yes, my characters are influenced by many things—celebrities, sexy photos on Facebook, people I know or see on the street.

Still writing. Although I never planned to write, I love it. It’s become my passion and now that I’ve allowed this world to form in my mind, there are all these hot, alpha men who want their story told.

Non-writing wise, my children will be in high school so I’m sure they’ll keep me busy.

Boxers or briefs? Boxers or commando-lol

Long hair or shaven head? Oh, that’s a tough one…depends on the man. Love both!

Hottest celebrity (tell us why, if you like)? Henry Cavill

Top same-sex crush (or opposite sex if you already like same-sex!) Kelly Ripa

Most disliked celebrity (tell us why, if you like)

Favourite book (tell us why, if you like) Oh so many…New Species series, Christine Feehan’s Dark series and…I could keep going on and on. I love to read.

Favourite place in the world (tell us why, if you like) Anywhere my family is. 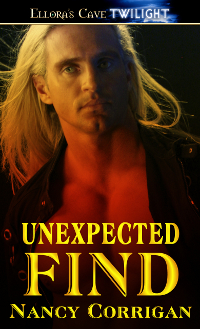 Since the murder of her best friend, Jazz is stuck in a safe but lonely way of life. She’s willing to sacrifice everything to keep her family safe from the shifter world. The sexy stranger who struts into her friend’s bar changes everything. From the first glance Jazz knows she’s sunk—their chemistry sizzles from across the room, it’ll be undeniable up close.

Rafe wants Jazz from the second he sets eyes on her. The depth of the need that swamps him every time he’s near her surprises him. It takes every last ounce of his self-control not to pounce on Jazz and make her his. Only her distrust of his shifter nature holds him back. He counts it as a win every time his beloved human gives in to their passion and takes him to her bed. But Rafe’s patience isn’t infinite and he’ll do whatever it takes, face any danger—past or present—to ensure that Jazz becomes his. Forever.

The butterflies in her belly took flight. The man was a romantic. “You know, I’m starting to enjoy the odd way you talk. It makes me feel as if I walked into a world where princesses wait to be swept away by their knight in shining armor.”

He grinned, the sad look replaced by amusement. Releasing her hands, he slid his around her waist. “You would make a beautiful princess.”

“One to be fought for.” He twirled a lock of her hair around a finger. “What about me? Would I fill the role of your knight in shining armor?”

She smiled, completely charmed by this man. She ran her hands over his chest, luxuriated in the layers of muscle under her palms. “I don’t know if any horse would be able to carry you for long. I see you more as a warrior, a conqueror.”

“One who demands the bonny ladies as his reward after a battle?” He swept her into his arms. She gasped and grabbed his shoulders. Lust heated his eyes as he mapped her face. “Oh yes, I like this fantasy and in it I get to choose you as my booty.” He bent his head closer so his golden eyes filled her vision. “I think I might keep you, Jasmine.”

Her breath hitched. “I think you have a wild imagination.”

“Or a hopeful one.” He eased back but watched her with that focused gaze she was starting to associate with him. “I want you.”

The lust-hazed glint to his eyes told her exactly what he wanted. For once in her life, she did too—but it couldn’t happen. She had responsibilities. Spontaneity and motherhood did not mesh. The little episode in Josh’s office proved that. She would’ve been mortified if Sara walked in while they were having sex. Everyone in town would’ve known within the hour. The other playgroup moms would find out, maybe shun her or at least look at her negatively. No. Any liaisons she had would have to be planned and kept hidden.

She licked her upper lip. “I haven’t had sex in a really long time, Rafe.” She dropped her gaze and stared at his chin. “What we did tonight wasn’t like me either. I’m not like that. Easy.”

He brushed his lips over her forehead. “I know.” He set her on her feet and took her hand. “Come, let’s get you home.”

She walked with him around the side of the building to the parking lot. He led her right in the direction of her car, not even pausing by the other ones or asking where she’d parked. A feeling of unease slithered over her. She stopped and tugged on his arm. He looked at her with scrunched brows.

She jerked her chin toward her car. “Why do you think I parked there?”

He ran a hand through his hair, glanced toward the cluster of vehicles then back to her. “Your keys. You drive a Ford and I figured you’d be parked by a light.”

Intuitive or something more? Doubt crept into her mind and fed the apprehension. She pointed across the lot to the cars near the front door. “Why not think I parked there?”

A sheltered mask slid over the warm and open expression he’d worn since she’d met him. The first trickling of fear snaked into her consciousness and her earlier suspicion came back.

He shook his head and the hard look disappeared. Using the hand he held, he tucked her against his side. “I am sorry, Jasmine. I just assumed that since you arrived so late you would’ve been forced to park as far away as I did.”

He gave her another reassuring squeeze and led her toward the other side of the lot.

She stopped him after a few feet. Embarrassment rose. Just because she was worried about Tony’s murder and whether or not the killer had been looking for money or a kid he could sell didn’t mean she had to think everyone she met was a criminal or a rogue shifter. She couldn’t believe she was reading so much into his actions, but paranoia had become a part of her personality. She questioned everybody’s motives. She had to.

“No, you were right. I was just curious, I guess. You’re a very observant man.”

He looked at her, the careful mask back on. “It’s second nature, I suppose. A consequence of my…job.”

“Security,” he grumbled and led her forward.

She considered that. It fit. She could easily see him working as a bodyguard for some important official or maybe a rock star. She grinned at the possibilities.

Before she knew it, they were at her car. She unlocked the door but Rafe planted his hands on either side of her body and caged her in. He leaned against her back and the evidence of his arousal pressed into her. With his mouth near her ear, he whispered, “I don’t want to let you go.”

The desire in his voice stirred hers back to life. She turned in his arms. Her reaction to Rafe wasn’t normal for her but she couldn’t deny it. Instant lust. She knew that’s all it was, even if he claimed it was more, but she’d been without a man for so long. This feeling was one she’d forgotten about. The crazy ‘nothing else matters’ one that made her want to roll around naked and sweaty with him until she sated the lust.

He nudged against her neck, urging her to accept him. Unable to resist, she bent her head and relished the nipping bites along her jaw. He fisted her hair and tugged, tearing a moan from her throat. He swallowed the sound with his mouth over hers. She opened for him, drew him in and their tongues twined and rolled. Slow at first, then with a growing hunger that left her breathless. She squirmed in his arms, desperate for the relief he could give.

He released the firm grip on her hair, swept his hands down her back and over her sides. With his fingers digging into her hips, he pulled her closer. The hard length of his erection pressed into her belly but he made no move to touch her more intimately. Didn’t slip his fingers into her panties. Didn’t counter the thumping in her clit. Didn’t ease the unbearable ache. He simply wrapped her in his arms and continued to kiss her.

After a long moment, he eased the tight embrace and skimmed the fingers that had brought her to orgasm a few minutes ago over her body. Up her spine, down her arms. He moved them to match the quicker pace his mouth took, but he didn’t come close to her breasts or her sex. And not touching her intimately heightened her arousal, built the anticipation. She had never wanted to have sex more than right in this moment.

She wasn’t sure how long they kissed but he finally pulled back and stared into her eyes. 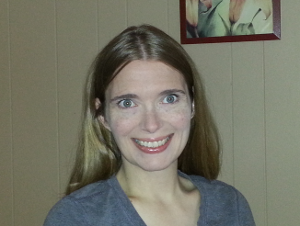 I’ve always been an avid reader and encourage everyone to escape the hectic daily grind with a few minutes a day in your favorite book.

I’m lucky enough to share my cat’s home with my three wonderful children, husband, dog and snake. When not writing, I work as a chemist in a pharmaceutical lab.

My passions beyond reading and family include music, classic cars, tattoos and animals (all of which have found their way into my writing in one form or another).

So that’s a little bit about me…