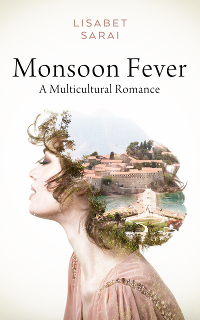 When a charismatic Indian lawyer arrives at their remote Assamese tea plantation, he tempts a married couple with forbidden carnal delights.

In the early years of their marriage, Priscilla and Jonathan eagerly indulged their physical desires, but now that passion has dwindled. Childlessness and the horrors of the Great War have taken a toll on their relationship. Though Priscilla still aches for Jon’s touch, he seems preoccupied with settling his father’s affairs in India, so they can sell the plantation they’ve inherited and return to England.

Anil Kumar served as solicitor to Jon’s father. Arriving unannounced, drenched by a monsoon deluge, he enchants both Priscilla and Jon with his beauty, poise and wisdom. In separate incidents, each of them succumbs to Anil’s lustful attentions. Will the illicit cravings excited by the handsome Indian be the final stroke that destroys their marriage? Or the route to saving it?

Note: This book was previously published by Totally Bound. It has been revised and re-edited for this release. 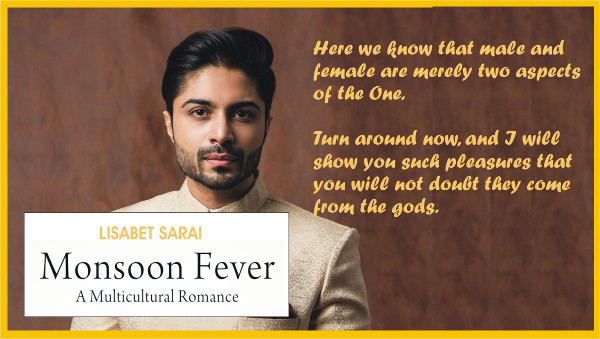 The next thing she knew, Jon was beside her, helping her to stand. He clutched her soapy form to his now-naked body and sealed her lips with his. Joy ballooned in her chest. It had been so long since she’d felt his decisive mouth or tasted his familiar flavour. She rubbed her breasts against him, smearing herself with his dirt. His rigid nipples poked at her chest. Below, she could feel his cock stiffening again, nudging into the gap between her thighs.

She opened her legs and tilted her pelvis toward him, inviting his entry. Then, all at once, a torrent of warm water poured down on their heads. They broke their kiss, sputtering in the surprise flood. Before they could respond, another bucketful drenched them.

“Anil!” Sputtering and laughing, Priscilla turned to find that the native was behind them. He too had shed his clothes. As she watched, he raised a pitcher and poured its contents over his own head.

The shower slicked his dark locks against his skull, emphasising the fine planes of his countenance. Rivulets coursed over his muscled shoulders and down his hairless chest. His skin looked oiled, cinnamon-hued and buttery smooth. Only in his groin did hair grow, in wild black tangles completely different from the golden fur at the base of Jonathan’s cock.

Priscilla’s palms itched with the need to caress that silky, dark skin, to mould Anil’s flat breasts and flick her thumbs across his chocolate-hued nipples. She saw herself kneeling in the puddle at his feet, swallowing his majestic penis. The urge to turn image into reality was overwhelming. Did she dare to act on her desire?

She glanced back at Jon. He too seemed transfixed by the sight of Anil’s glorious nakedness. His cock was fully erect once again. It twitched slightly, in rhythm perhaps with his racing pulse. His hands were clenched at his sides, but as Priscilla watched, he relaxed and began stroking himself. He swelled further.

She willed him to look away from Anil for a moment and to meet her gaze, with its unspoken question. He must have felt her thoughts. Their eyes locked, and for a moment Priscilla felt the old connection that they’d had at first, the sense that everything was understood. He nodded slightly, a half-smile playing on his lips.

She beamed her gratitude back at him, then turned back to Anil’s body. Lowering herself to the tiled floor, she grasped the Indian’s cock at the root and stroked it gently. The taut skin sheathing his hardness felt like silk. The bulb was scarcely wider than the shaft and peaked rather than round, like a blunted arrowhead. His foreskin puckered below it. Droplets clung to the tip, perhaps from the shower, perhaps his own secretions. Priscilla’s mouth watered at the sight.

She bent closer and pursed her lips around the bulb, tonguing the slit, sampling his moisture. The taste made her crave more. Opening wide, she engulfed him, sucking him deep into her mouth.

Anil hummed with pleasure. He laid a light hand on her damp curls, guiding but not forcing her as she slid her mouth along his length. He hardly thrust at all, though the increasing tension in his flesh made it clear that his excitement was peaking. Reaching between his legs, she cupped the velvety sacs hanging there, thrilled to feel them tighten as she brought him closer to the edge.

Her own body was on fire. Her nipples were points of flame, and her clit was a glowing ember no amount of wetness could quench, though her juices trickled down her splayed thighs onto the floor. Anil’s hands were on her shoulders now, kneading her flesh as she sucked rhythmically on his. He was nowhere near her sex, yet his touch sent hot shivers through her. In her mind’s eye, she saw herself skewered by the steely cock now sliding in and out of her mouth, and the image nearly sent her into her own climax. She sucked more strongly, nipping at the bulb each time she reached the apex. The native groaned, moments away from coming.

“Pru!” Jon’s voice was low and hoarse with lust, close to her ear. “Don’t let him spend. Don’t waste him. Let’s get to the bedroom.”

You’ll find information and excerpts from all Lisabet’s books on her website (http://www.lisabetsarai.com/books.html), along with more than fifty free stories and lots more. At her blog Beyond Romance (http://lisabetsarai.blogspot.com), she shares her philosophy and her news and hosts lots of other great authors. She’s also on Goodreads, Pinterest, BookBub, BingeBooks and Twitter.