I love reading a series. Where I get the chance to meet new characters but be reacquainted with old ones.

So, I guess it was inevitable that once I found my voice and started to write, I’d enjoy writing series as well as reading them.

Diomhair, Gaelic for secret, began as a tiny seed of an idea, when I passed a ruined castle not far from where I live. In my mind, I could see it repaired and ready to be used for…

Once I thought that ideas hit me thick and fast. I went back to make sure it was really what I had in mind, and on my way out of the driveway, a white van came round the corner and missed me by inches.

The mystery was born.

So here we are at book four, Secrets Dispatched. Each book can be read as a standalone and shouldn’t spoil the others for you. The only real, common thread is *cue drum roll* the white van.

So Mr White Van Man, really your awful driving did me a favor. But you also took ten years off my life, so hey, don’t make a habit of it eh? 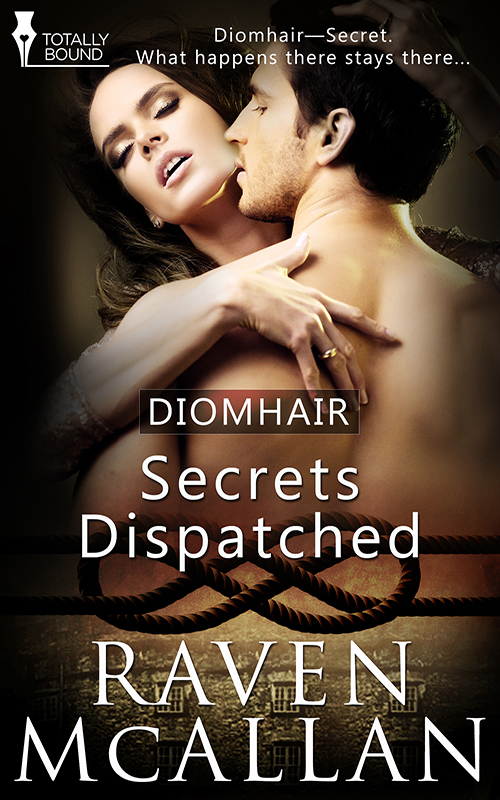 At some time in their life, everyone has choices to make.

For Shane it could be a chance to rediscover her love of kink.

But Shane has to settle some demons before she can move forward.

Until then, well a little playing wouldn’t matter—would it?

However, play can become serious, and decisions have to be made that could change both their lives for ever.

This is their chance, to be together as Dom and sub or wave goodbye. But at Diomhair, nothing is as straightforward as you hoped, and Ross and Shane have a lot to do, before they can say yes…or no.

And a wee tease…

However, the one problem with sleet, Shane decided ten minutes later, was that it turned to snow. Heavy fat flakes that rapidly covered the windscreen, which the wipers had a hard time to dispel. Snow wasn’t something she encountered very often.  By then, she was travelling along a narrow drive, which according to the now annoyingly cheerful Sally, and a tiny discrete plaque on the gatepost, was the entrance to Diomhair, and was a private road—no trespassers. It was irritating to have to get out of the car to brush the snow off to read it, and debate on the wisdom of turning on to it. However, Shane was sure she’d read somewhere that there was no law of trespass in Scotland, even if Katrine hadn’t actually agreed with her when she’d asked the question earlier. Therefor, she ignored that bit as a warning to tourists and itinerant sales people.

Do you even get those these days? Isn’t it all telephone calls and spam emails? She was somewhat hazy on the subject and after all this was Scotland, not Australia. How was the net around here? Her phone, as well as the one she’d borrowed from the hotel was hovering on one bar of reception, and the radio in the car delivered very little music and almost total static.

Shane rounded a bend with care, and was relieved she had done so when the back of the car fishtailed and slid into a skid. She drove into the skid with competence and corrected it. She wasn’t an outback girl for nothing, even if she did live in the city now.

Ahead, almost hidden in the gloom, she could just make out a tall dark stone building with a turret.

A turret? Wow. It was a real castle it seemed and not some mock Victorian monstrosity. Shane hadn’t had time to research the history, or even if this Jess lived in it as her private home. Was it one house or apartments? Was it offices and a health club as well? Whatever it was, it was big and imposing and austere against the white of the snow. Shane fell in love with it there and then. How fantastic to live in it in any way.

The brief information she’d found on the net had been vague in the extreme. The car lurched over some unseen object, well hidden in the snow, and Shane brought her mind back to the alleged roadway. Wool gathering wasn’t a good idea in that sort of weather. She realised she was probably driving over the verge and not on the tarmac surface. If it was even tarmac, she had no way of knowing.

With hindsight she regretted setting off from the hotel without bringing an insulated mug of tea or one of the delicious looking cookies she’d spied to sustain her. Even though she’d had that big breakfast not long before her tummy rumbled and her mouth was dry. Apprehension or Excitement? A bit of both probably.

Nevertheless, by the time she pulled up outside a big wooden door, she was shaking and it wasn’t all down to the weather and lack of food. She decided she was scared. Scared that Jess might not be there, scared she was. Scared that Jess would hate her, not be prepared to talk and leave Shane unable to find completion. Shane switched off the engine, and watched the snow fall. It better slow down soon, or she’d be hiking back. Was it quicker cross country? How dare the snow defy the weathermen and come a day too soon?

Wuss, get out of the car. Or turn on the engine and go away for good and try to enjoy a cold wet holiday. She took a deep breath, did her coat up, pulled her hood over her head and stepped out of the vehicle. A blast of icy wind rocked her on her heels and almost took her breath away. The temperature had dropped considerably, and the snow was now so heavy her tyre tracks were almost obliterated.

Shane hoped to hell someone was at home, or she’d more than likely be found in spring as a frozen corpse inside her buried car. She moved toward the castle door with her breath making white, misty, spirals in the air and with snowflakes on her eyelashes. Thank goodness for contact lenses. Specs would be useless. Mind you she patted her pocket to make sure her lenses case and her glasses were there. She’d lost too many lenses in the past and ended up half blind not to carry specs around, annoying though it might be.

She looked at the walls of the castle and groaned. She had to get in there? Why not try something less challenging like breaking into the Royal mint wrestling with a croc.

Okay you can do it. Deep breath and go.

The snow was piled up higher near those forbidding walls and even though she only had a few yards to trudge through it, her jeans were soaked by the time she searched for the doorbell. To her amusement it was an old fashioned tug rope type. Not that she felt much amused. Pissed more like. Could they not have an ordinary bell like everyone else? It would take a giant to get a good sound from it, not a five foot something woman.

She hauled and after a second or two, heard a deep clang echo inside the building.

“Come on, hurry up.” Shane pulled the bell again. “Please, please someone answer the bloody door.” She stamped her feet, and for the first time thought what an idiot she’d been to continue her journey to the castle once the snow started. Shane dipped her head to pull her hood further over her head in a vain effort to keep her hair dry. Already frizz-head hair had begun, and she’d have a devil of a job with it once she got it dried again. Not for the first time, Shane wished she’d kept it short in the style she’d cut it after the asshole experience, as she now called it. Instead, she let it grow, more as a way to show herself that Poisonous Pete the Plonker and his only long hair is acceptable diktat, wasn’t why it was long. The one thing she did do now, which he’d objected to, was using straighteners on it. Hence knowing that all her hard work was about to be ruined if no one answered the door.

“For fuck sake, open won’t you. What if I say open sesame? Or get on my knees and beg? Will that work?”

There was a grating noise, and a blast of heat hit her. Before Shane looked up someone spoke.

“Open sesame won’t. But I do like the idea of you on your knees and begging. I won’t make you do in in the snow though.”

Secrets Dispatched is available from: https://www.totallybound.com/secrets-dispatched