A few years ago I went sightseeing in my own backyard and fell in love with a beautiful area just a few hours outside of Toronto called the Kawarthas. It’s the kind of place where I could imagine buying a cottage, or even picture moving to on a more permanent basis one day. You see, it has a vibe. I know – how very woo. But it does. It’s magical, almost otherworldly. And I knew in an instant I was going to create a fictional universe based on this bewitching region in Ontario, Canada. 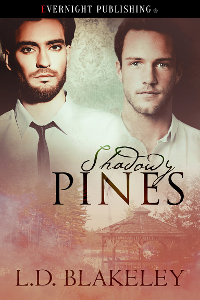 When an over-educated, underemployed millennial is called home to help with the family business, he jumps at the chance to leave his crap job, crappier love life, and the city behind.

How the hell do you cope when you find out magic – actual magic – is real? Or that you also happen to come from a long line of powerful witches? And that handsome man with all the sizzle? Yeah, he might be trying to kill you.

“You’d be surprised how easily swayed I can be by a handsome face.”

“My aunt says you’re new in town, too. What’re you here for?”

“Seriously. My father sent me back here to check out a vineyard. He’s interested in adding it to the wine brewing facility we already run, the Sharpe Wine Butler on the outskirts of town. You know it?”

“Can’t say I do, but it sounds more interesting than why I moved here.”

“Why are you in Shadowy Pines?”

“Jude and Poppy needed my help, I had nothing worth holding on to in the city, so—here I am.” Finn shrugged. “Now that’s boring,” he added with what he hoped was a charming smile.

“You don’t give yourself enough credit, Finn.” Owen pulled his chair closer and placed his hand on Finn’s knee. “Feel that?”

Of course he did. It felt as though a live wire had been placed against his bare skin.

“Yes.” Finn cursed the breathy, needy tone his voice had taken on. “What…” He wasn’t sure how to phrase his question so it wouldn’t offend. “What is that? I mean, I get the concept of electrical attraction, but this? This isn’t normal.”

“No, not really.”  Owen’s fingers were slowly caressing Finn’s leg and inching their way up his thigh “Not for most people.” Owen leaned forward and took Finn’s face in both hands and brought their lips so close Finn swore he could taste him. Owen’s eyes visibly blazed in a way that barely seemed human. Finn froze, his breath catching in his throat.

When Owen finally pressed their lips together, Finn felt another jolt of electricity arc through his entire body and he gasped at the sensation. Owen’s fingers at his nape trailed delicious sparks across Finn’s skin as he licked at the seam of Finn’s mouth. Finn opened eagerly and nipped at Owen’s bottom lip. Never had a kiss made him so crazy with want. He needed to touch, wanted to crawl inside of Owen and feel him from the inside, out. But as Finn reached out a hand, Owen pulled away, his breathing every bit as labored as Finn’s.

“We’re different, Finn.” Owen licked at his lips and watched Finn’s eyes follow the tip of his tongue. “You’re different. You know that, right?”

Finn had no response. None that made any sense. Right now all he wanted was to tear at Owen’s clothes and taste every last inch of the man. But for some reason, Owen had put on the brakes and wanted to discuss—what, exactly? Finn was at a loss. And his dick could have cut glass.

“The woman in the grocery store. You mentioned that wasn’t the first time you’d seen her, right?”

“Right.” Finn’s voiced faltered slightly. Not sure where Owen was going with this, he gestured for him to continue.

“I think she saw you for what you are.”

“And what exactly is that?” Finn asked, not sure he wanted an answer.

Owen’s face was so serious, so earnest, Finn almost believed him for a split second.

He threw his head back and laughed uproariously. He laughed so hard, he could feel tears well up in his eyes. Well that’s an effective way to kill an erection.

But Owen’s expression hadn’t changed an iota. He simply sat and stared at Finn.

Dammit! He knew there was a reason he’d established his dating embargo. He certainly could attract the crazies. 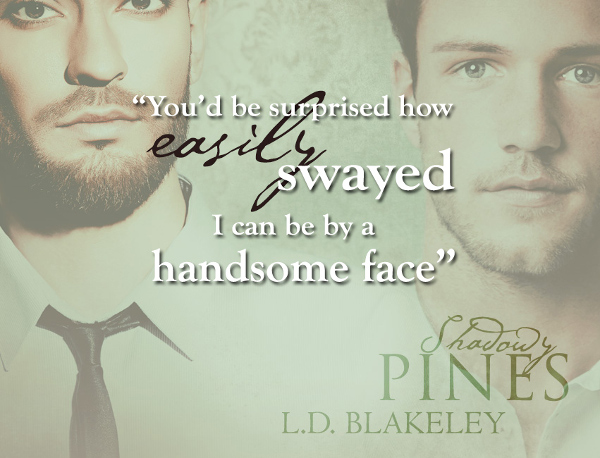 L.D. Blakeley is a pragmatist with a romantic soul & a dirty mind. She loves horror movies, hot sex, and happily ever afters. She’s easily distracted by shiny things, and is a slightly neurotic, highly ambitious dreamer who enjoys dabbling in photography & pretending she can carry a tune.

In another life, L.D. was a newspaper reporter, an entertainment & music writer, travel writer, website content editor, and a marketing shill. Now she prefers to spend her time writing hot, steamy fiction (with a healthy dose of romance) about intriguing, sexy men.  Although she dreams of living some place isolated with an endless supply of wine and an infinite number of titles on her eReader, she currently lives in downtown Toronto with her husband and their rock star cat.

One Response to "Shadowy Pines by L.D. Blakeley (@LDBlakeley)"