Hello, and thanks so much for having me on today! Shifter Woods: Snarl is the third entry in my Esposito County Shifters series and takes place a few weeks after the events of Shifter Woods: Howl and Shifter Woods: Roar. In this story, we meet disgraced wolf Alpha and ex-SEAL Jack Hawthorne, who shows up in Esposito County hoping to get a job with a former commanding officer. The last thing he expects to find is his mate … or to learn that Kate Chandler is the daughter of his former commander, has no sense of smell, and isn’t interested in being mated. Jack will need all of his SEAL endurance skills to woo and win his mate—assuming that the Alpha of Esposito County’s wolf pack lets him stay at all.

The fourth entry, Shifter Woods: Scream, will come out in late October, with plans to combine all four novellas into a box set and print version in January 2019. I also plan on doing a full-length novel set in Esposito County – not sure which couple is going to star in it yet, but I promise that everyone from the Shifter Woods novellas will make an appearance. 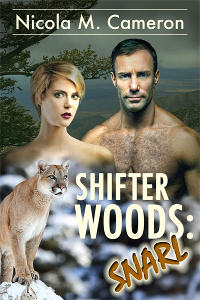 Can a lone wolf woo and win his very own kitty girl, or will he get turned into cougar chow?

Jack Hawthorne is an Alpha wolf shifter and former SEAL who lost the leadership of his pack while serving his country. Kate Chandler is a cougar shifter with no sense of smell and a deep-seated distrust of fated mates. When these two are thrown together at the Cougar Ridge Ski Resort in Esposito County, NM, Jack realizes that the sharp-witted, beautiful female is his heart’s mate. But her injury means she can’t smell the truth, and her father (and Jack’s former commanding officer) has made it clear that Kate is off limits.

Now, Jack has to convince Kate that they’re meant for each other, win her father’s approval, and convince the local wolf pack to accept him. But as every SEAL knows, the only easy day was yesterday.

Kate arched her back, pressing a lace-encased breast against his hand. “I seem to remember you saying something about SEALs only needing one hand for bra hooks. Want to prove it?”

Jack’s grin could only be called predatory. He slid a hand under her spine, the pressure of her bra band easing as he undid the hooks. “Less than five seconds,” he said smugly. “That’s a new personal best.”

He rested his hand on her ribcage, thumb and index finger cupping the underside of her breast. “Oh, trust me, I can do more than that.” Bending down, he took the fabric of her bra in his teeth and tugged it loose, exposing her. “Woof,” he mumbled through the material before spitting it over the side of the bed.

She chortled. “You animal.”

Leaning down again, he ran the tip of his tongue over one dark pink peak, delicately flicking it. It hardened, the pleasure arrowing between her legs and making her inner muscles clench.

He did, licking and suckling while his fingers teased the other nipple, rolling it before giving it a soft pinch. She melted into a happy puddle under his talented attentions, feeling his own arousal growing as the ridge in his jeans pressed against her lower thigh. Sliding her fingers into his hair, she gently scratched his scalp before slipping down further and touching his ears. She heard/felt the rumble of pleasure as she ran a fingertip over the curve of one ear. “These are so cute. I bet your team nickname was Wolfman.”

He let a nipple pop out of his mouth, the air cooling it quickly. “No bet. They’re round, but the cartilage never folded over completely so they look pointed from some angles.”

She repeated her caress and was rewarded with a soft hiss. “They’re also sensitive.”

“Yeah, they are—Kate.” Her name ended on a gasp as she traced the edge of the soft cartilage. “Baby, you keep doing that and I won’t be responsible for what happens.”

He leaned up, capturing her mouth in another of those lush, greedy kisses. “I’ll give it to you, everything you want,” he said against her lips. “But let me enjoy this, okay? I’ve been dreaming of you since the day I saw you.”

She made a wordless noise of agreement. He returned to her breasts, giving both her nipples the slightest teasing bite before kissing his way down her stomach, her navel, until he reached the waistband of her jeans. “Permission to take these off, ma’am?”

She stroked his hair again, enjoying the softness of it. “Granted.”

He made quick work of the button and fly zipper, sliding the tight denim down and stripping it off her legs. She was grateful she’d worn the matching panties to the bra, a pretty bikini style with lace around the edges. He sat back on his knees, licking his lips. “Fuck. Blue lace. That’s my favorite, baby.”

She shifted one leg, opening her thighs in unmistakable invitation. “You haven’t even seen the best bit yet.”

Even in the room’s dim light his smile glowed. “Anyone ever tell you you’re a cocktease, Ms. Chandler?”

“Mm, it may have been mentioned once or twice.”

He slid his fingers under the blue satin, sending a shiver of anticipation across her hips as he slowly pulled her panties down, tossing them to the floor alongside her bra and jeans. The coolness of the air chilled the hot, damp flesh between her legs, and she sucked in a shuddering breath when he ran his fingertips over her outer lips. Bringing his hand up, he sniffed it with delight. “Oh, yeah. You smell so good.”

In any other situation the reminder of her disability would sting, but now all she could feel was a wriggling sort of glee. “What do I smell like?”

He inhaled her essence on his fingers again. “Like salt mixed with something tangy and sweet. I’ll be honest, it’s making my mouth water.”

She rubbed her foot along his side. “Well, if it smells that good…”

Growling softly, he slid down between her thighs, wedging them open with his shoulders. 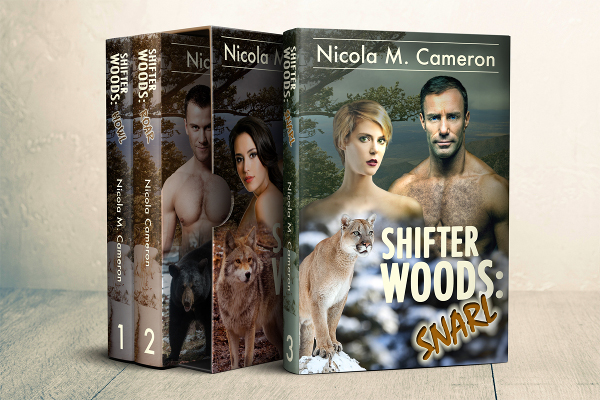 Nicola Cameron is a married woman of a certain age who really likes writing about science fiction, fantasy, and sex. When not writing about those things, she likes to make Stuff™. And she may be rather fond of absinthe.

While possessing a healthy interest in romance since puberty, it wasn’t until 2012 that she decided to write about it. The skills picked up during her SF writing career transferred quite nicely to speculative romance. Her To Be Written work queue currently stands at around nineteen books, and her mojito-sodden Muse swans in from Bali every so often to add to the list, cackling to herself all the while.

Nicola plans to continue writing until she drops dead over her keyboard or makes enough money to buy a private island and hire Rory McCann as her personal trainer/masseur, whichever comes first.