One Night More By Sabrina Sol

With only hours until her big 3-0, Vanessa still has three things left on her “Before I Turn Thirty” bucket list: have a one night stand, get a tattoo, and get engaged. When her boyfriend dumps her during dinner, she knows a ring isn’t happening. But no-strings sex with the handsome stranger she later meets at a bar? Check.

Mateo never expected to hook up with the sexy brunette. He also didn’t expect for her to bolt before he could get her last name. Luckily, he’s about to get a second chance.

But Vanessa only wants to forget that night once she realizes Mateo is the owner of the landscaping company vying for a lucrative contract at the hotel where she and her father work. With Vanessa’s dad deciding if Mateo’s business will get the multi-million dollar deal, they must keep things strictly professional—or else risk consequences that could affect their families. 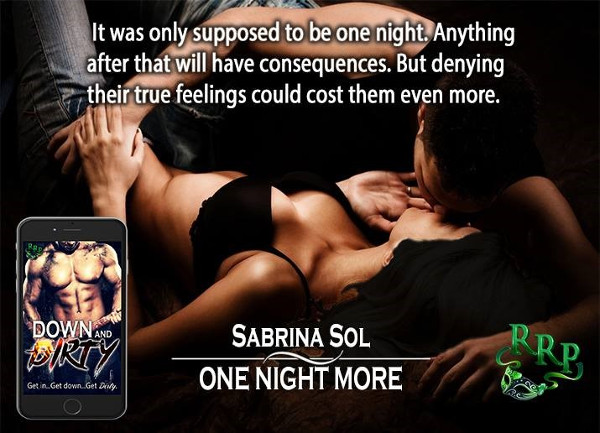 He didn’t say anything. At least not right away.

Mateo stayed quiet if only to give himself time to adjust to the erection that had just formed in his pants. God, there was something so fucking sexy about a woman who asked for exactly what she wanted. So why wasn’t he grabbing her by the hand and running toward her suite?

She must have wondered the same thing. The air between them flowed with uncertainty as her expression changed from confident to embarrassed. It didn’t matter that he hardly knew this woman, he still hated that he was the one responsible for that look in her eyes.

What the fuck was wrong with him?

“Okay, so I guess that’s a no,” she blurted nervously. “Sorry for making things weird. You’ve been nothing but friendly and I overstepped. So, if you’ll excuse me, I’m going to go to my room and pretend this night never happened. It was nice meeting you. Have a good, um, life.”

Vanessa jumped off the stool and grabbed her purse. His hand flew out immediately and he caught her wrist before she could take another step.

He waited until she would look him in the eye. “Stop. You didn’t make things weird or overstep. You just surprised me, that’s all.”

Mateo loosened his grip only to pull her closer. Her soft thighs rubbed against his knees and he fought back a groan. “Right now, it’s about the only fucking thing I want in this world. But…”

That sexy smile disappeared. “But what?”

Her eyes dropped to the floor. “Okay.”

“Shit,” he grumbled. “You seem like such an amazing woman, Vanessa. And, believe me, if we had met a few weeks ago, I’d be all over you right now. It’s complicated.”

Her eyes widened and she yanked her arm from his grasp. “Oh my God. You have a girlfriend, don’t you?”

“Then what’s the problem?”

She squinted. “How would you….? Oh. I get it. It’s because I’ve never done something like this before. You’re worried I don’t know the rules.”

He shrugged. “Even though we just met, I’d hate to be another reason why you regretted tonight.”

Vanessa nodded as if she agreed and he expected her to walk away. Instead, she nudged his knees open and walked between them until her face was only inches away from his. He could smell her perfume–sweet, yet bold. Somehow he resisted the urge to nuzzle her neck and take a taste.

“I’m a big girl, Mateo. You don’t have to worry about hurting me. I understand what this would be and I’m okay with it. In fact, I’m pretty excited about it. But I’ll understand if you still can’t. So, this is what’s going to happen. I’m going to head up to my room—it’s suite 600. If you don’t knock on the door in the next fifteen minutes, then I’ll know your decision. This way you don’t owe me an explanation either way, okay?”

She shushed him by placing a finger against his lips. God, how he wanted to suck on that finger. “Fifteen minutes. Room 600.”

And then she was gone. 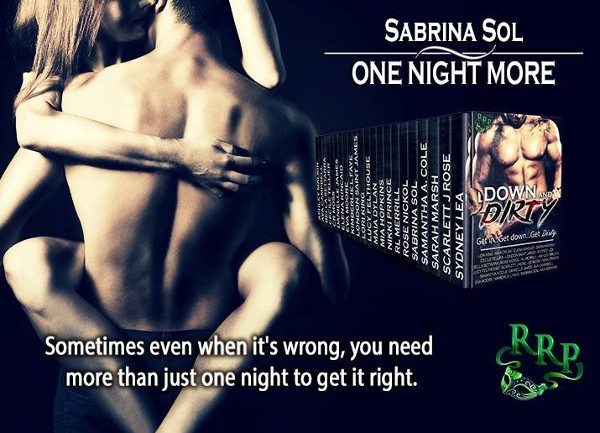 I’m part of a large, extended Mexican family and we love to laugh almost as much as we love to eat! Because of this, family and food are strong themes behind many of my stories.

But if any of my tias or cousins ask, they are definitely NOT the source of inspiration for some of my characters. Okay?