Trent Simmons had spent his life helping others.. While recovering from the injury that got him discharged from the service, he met the woman he thought he was going to spend his life with, but it was not meant to be. He spent the next several years infiltrating a human trafficking slavery ring recusing countless women.

Pricilla Wilder had decided she was happy living alone. She had watched her mother raise two children on her own and do a wonderful job. She didn’t need a man in her life. Then an insane madman targeted her and her sister trying to extract revenge on their father.

Trent was assigned to be one of Pricilla’s bodyguards. The woman was smart, and sexy. Trent can’t ignore the feelings she awakens within him—feelings he thought had died years ago. Can he convince her to give him a chance or will fate once again destroy his world? 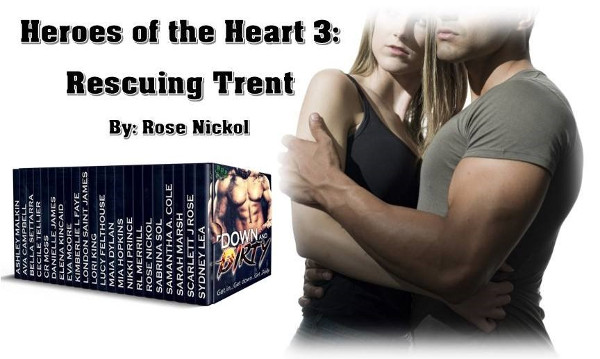 Pricilla woke the next morning and found Trent up and dressing. “Good morning baby. I was going to let you sleep a while longer. There’s no reason for you to be up this early.”

She rolled to her side to watch as he sat to pull his boots on. “Why are you up? How early is it?” The sun was shining bright so it couldn’t be too early, could it?

“Early. I need to go help the men with the horses. We have a couple more coming to board today, and we’re down a couple men today,” Trent explained as he finished dressing.

Priss maneuvered to sit on the side of the bed, pulling the sheet with her as she went so that it was wrapped toga-style around her front. “Can I help?” She didn’t know much about working with horses, but she wanted to find out and spend more time with Trent. The thought of waiting in the house by herself was boring.

“I thought you might want to catch up on your rest, but if you want to come hang out, sure.”

“Let me take a quick shower, and I’d love to come,” Priss was out of the bed and heading for the shower before he could change his mind.

“I’ll meet you down in the kitchen,” Trent said with a laugh as the bathroom door closed behind her.

Priss hurried through the shower, excited to be able to help. She’d always wanted a horse when she was growing up, but living in the city prevented that. When she got to the kitchen, Trent had started breakfast. “I can do that,” she told him as she walked up behind him and wrapped her arms around his waist.

“I got this. You do the coffee, and it should all be ready at once.”

Trent and Priss were just sitting down to eat when a knock came at the door. “Trent, Ms. Welch showed up early, and she’s demanding you come out and help her personally.” The man at the door told Trent.

Trent rolled his eyes and nodded to the man. He turned to Priss, “That didn’t take long. I figured she’d show up once she heard I was here. She’s a repeat customer and her father boards several horses here. I have to go help her Priss. She and her father are some of our best customers. Go ahead and finish here. Come on out to the barn when you’re done.” Trent told her as he headed out the door after giving her a hard kiss on the lips. Priss watched Trent go out the door without even having coffee. That wasn’t right.

She explored the kitchen until she found a thermos and some containers for the food. She packed everything up and headed to the barn with it. If this woman were rude enough to interrupt breakfast Priss would show her how it was done. Looking around to make sure she had everything, she gathered what she had packed and marched out to the barn.

She saw a large horse trailer and a fancy little car parked beside it when she got to the barn. She could hear the sound of voices coming from the far end of the barn and headed that direction. She passed a couple of the ranch hands as she went and couldn’t help but overhear their conversation.

“I don’t know why Trent lets Elizabeth treat him like that. You’d think she owned the ranch instead of him and Martin. I know their business is good, but nothing’s worth the way she treats him.”

Even more determined to check this woman out, Priss continued single-mindedly towards the sound of the voices. What she saw stopped her in her steps. Trent was kissing the woman. A very beautiful, model thin, perfectly groomed woman. And it was a very passionate kiss. The woman had her arms wrapped around his neck and was plastered against him.

She must have made a noise because the woman released him and stepped back. “I’ve missed you too lover. It’s been too long. You should have phoned and let me know you were back in town. When I heard about Martin, I had to come. He means as much to me as my father.”

Priss watched the scene before her wondering if she’d been wrong about Trent. She dropped the basket and turned, running back to the house. When she got to the house, she ran up the stairs. She went straight to the bedroom and quickly grabbed her stuff. What did she do now? She didn’t know anyone here and wasn’t going to wait for Trent to finish with his lover.

She threw her bag over her shoulder and ran down the stairs and out of the house. She couldn’t be there when Trent came back in. He wasn’t going to use her that way. She started running, not sure where she was going. She just knew she had to get out of there. Now. 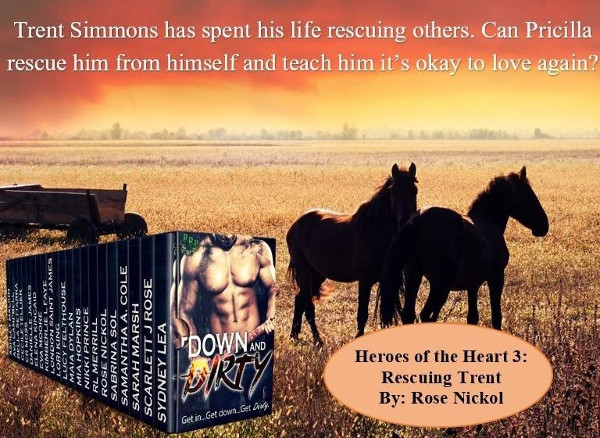