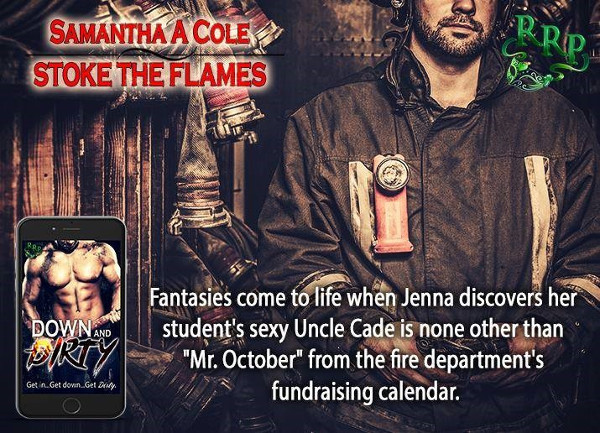 Stoke the Flames By Samantha A. Cole

After losing a bet, Cade Fallon ends up in the fire department’s annual, fundraising calendar—at least it was for a good cause. At first, it was funny having strange women run up to him and ask for pictures or autographs, but it doesn’t take long for it to become annoying.

Jenna Anderson is shocked to learn her student’s uncle is “Mr. October” from the calendar her friend bought her, but she’s more concerned about young Christopher’s falling grades. The last thing she expected was Cade’s interest in her—especially when he’s got women falling all over him. Refusing to be another notch on his belt, she fights her growing attraction to him.

When Cade realizes Jenna is the woman his heart has been searching for, he knows he’ll have to work to convince her. Stoking the flames between them shouldn’t be too hard—after all, he is a fireman.

A short while later, as Jenna was teaching her students about the pilgrims and Plymouth Rock, the fire alarm resounded throughout the school. Knowing it wasn’t a drill—she would have been notified prior to the alarm—she calmly had her class line up at the door before instructing them to walk out to their designated meeting area. They’d practiced fire drills every other week to ensure the students knew what was expected of them and where to go. Unfortunately, in this day and age, they also practiced active-shooter drills too, although they called them “code red” alerts as to not frighten the children.

After making sure no one was left in the room, Jenna closed the door behind her, before following her students, who were walking single file, out to the playground. She did a headcount as they stopped at their assigned spot. All were present and accounted for.

Spotting Caroline and her charges, Jenna eased her way through the crowd of children, while still keeping an eye on her own students. “What’s going on? Who pulled the alarm?”

“I don’t know,” Caroline replied, shaking her head. “My kids were in the middle of a science quiz.” She turned to her students and reminded them not to talk about the questions on the test.

Jenna’s next thought was interrupted by the sounds of sirens as several fire trucks and a police car drove up to the school with their emergency lights blazing to the delight of the students. They all watched in awe as several firemen climbed off the trucks, grabbed pieces of equipment, and entered the building. The school principal, Jeff Carpenter, was at the front of the school talking with the fire chief. It appeared to be a false alarm, but would take several minutes before they confirmed it.

Suddenly aware a few of her students were horsing around, Jenna interrupted the impending chaos and calmed them down. Five minutes later, the firemen filed out of the school and apparently gave the all clear signal to the principal, who then waved for the teachers and students to return to their classrooms. As Jenna began to line her students back up, Chris pointed to the group of firemen who had taken off their helmets and turnout coats. “There’s my Uncle Cade!” 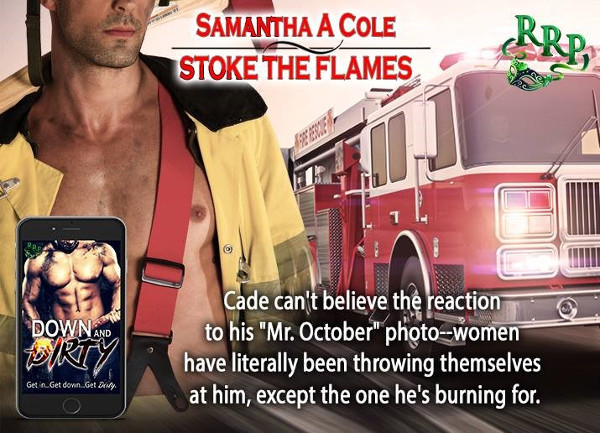 A proud member of Romance Writers of America (RWA), Samantha A. Cole is a retired policewoman and former paramedic who is thrilled to add award-winning author to her list of exciting careers. Her stand alone novel, The Friar, won the silver medal in the 2017 Readers’ Favorite Awards in the Contemporary Romance genre out of more than 1000 entries. While the original planned stories for the Trident Security series have been completed, they have brought many opportunities for Samantha to spread her wings and bring her readers more characters and stories to love.