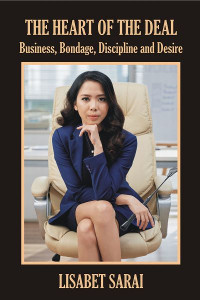 Ruby Maxwell Chen, the lovely and ruthless CEO of a sprawling British business empire, has no qualms about playing dirty – very dirty. She’s happy to use sex to help her close a deal, especially when she’s the one on top. Ruby loves the game, and she expects to win. When she encounters the inexplicably charismatic American entrepreneur Rick Martell, though, she wonders if she hasn’t finally met her match.

From the trendy clubs of London to the Hollywood Hills, Ruby and Rick compete for ownership of a strategic factory in Malaysia. As their struggle for dominance escalates and their mutual lust flares, they draw their employees and associates into their outrageous power games. The stakes could scarcely be higher, as Ruby and Rick play for the ultimate prize: a night of total physical surrender.

Note: This book was previously published under the titles Ruby’s Rules and Nasty Business. It has been re-edited, revised and updated for this release.

We are in a taxi now, in the semi-private darkness, and his hands are all over me. I don’t worry about the driver. What is there that a London cabbie has not seen? I teeter between enjoyment and terror. Oh, I want this stranger, but surely, it must be on my terms.

He brings my hand down between his thighs, and I feel triumph. Finally, he is erect, he wants me. He unzips his trousers and releases his cock. “I’d like you to suck me,” he says. There is a trace of irony in his voice. “Assuming that you are feeling generous, of course.”

He is watching me as the passing lights first illumine me, then throw me into shadow. He feels my hesitation. “Go on,” he says. “You know you want to.”

Recklessness and desire. This is only a one-night stand. I should follow my heart, body, whatever. I straddle him as he lies back on the bench seat, arrogantly thrusting my arse in his face. No kneeling before my master, not for me. His penis bobs in front of me, inviting, almost taunting.

I decide to taunt him in return. I begin with the lightest of touches, just a tease; the tip of my tongue on the sensitive knob. I am rewarded by a faint moan. His swollen member twitches, nearly hitting me in the face. Carefully, I trace the ridge below the bulb, delighting in the smoothness, and the tension underneath.

His cock strains toward me, seeming to beg for the warm depths of my mouth. But I continue to tease, licking, nipping, tracing the veined length of him with my tongue, but not letting him into me.

I feel his fingers between my legs, and realize that he has decided to tease me in retaliation. So be it. I am grateful for any touch there. The more I sample his cock with my tongue, the more I want to feel that swollen bulk deep in my sex. It is not the longest, nor the thickest, nor the hardest cock I have ever encountered. But like its owner, it practically glows with some kind of sexual energy. I can feel the vibrations when I bring my lips close to kiss the tip. Still, though, I resist the urge to engulf him, to feast on him until he cannot bear the pleasure. That is what he wants, I know, and for that, he will just have to wait.

“Come on, Ruby,” he says, his voice husky, persuasive. “Don’t be shy. I know that you’ve sucked cock before. Open up!”

It does not register; the fact that he knows my name. Hardly surprising, because at that moment I am impaled. Until now, the most delicate, fleeting caresses, making my body scream for more. Now, suddenly, there is something hard and smooth in my cunt, sliding in and out of my slippery cleft and bringing a scream to my lips, despite my determination to remain in control.

He takes advantage of my gaping mouth. As I gasp for breath, struggling to comprehend and control my reactions, his rigid penis slips between my lips. Silk over granite. Hot blood pulsing. A tremor takes me as he thrusts simultaneously, deep in my throat, deep in my sex. I am skewered on these two points of pleasure.