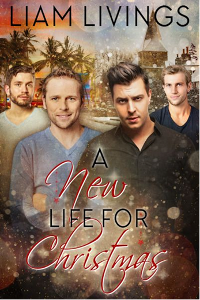 What is the story behind the story?

Every year I watch The Holiday. I remember seeing it at Christmas in the cinema the year it came out. Walking out of the cinema, I brushed a tear from my eye and said to my friend, ‘That’s not going to be the last time I watch that film.’ And rest assured, it wasn’t.

Some years I watch it twice!

Many years ago I read a book called Life Swap which is about a house exchange between two women and it opened up each character’s eyes to what they had missing in their own life and the opportunities for change.

I’m a great one for a change of scene is as good as a rest. That it’s useful to go elsewhere to make you think about your own life.

I also always felt a bit frustrated by how open-ended the ending of The Holiday is.

So I combined all these factors and decided to write a life swap festive m/m romance set in a bit of the UK I’m familiar with (I grew up in the New Forest) and a part of America I’d like to go, and am sort of familiar with, having watched The Bird Cage approximately twelve dozen times.

What’s your favourite thing about Christmas?

There’s a lot of things I like about this season. I’m not great with the cold and darkness of winter, so having a reason to see friends and family, to make lots of lovely comforting food, and relax with a film or board game, is what I love most. So basically, all of it!

There’s something comfortingly familiar about some of Christmas being the same each year – the films, the music, the board games, the trying to rush around and see everyone – while also being a bit different too. It’s that too, I love.

The novella is reduced to 99p / 99c for a limited time, so you can snap up a bargain! http://mybook.to/New_Life_Christmas

Here’s an extract from when Kyle arrives from America to England, to stay in Oliver’s house in the New Forest:

Kyle was surprised at the price of the taxi and distance the cottage was from Heathrow. He’d expected ‘London’s near’ to mean thirty minutes, not an hour and a half and a demand of, ‘That’s a hundred quid, mate,’ from the taxi driver.

The taxi stopped in front of the cottage Kyle had seen on the website. It was surrounded by trees covered in snow, also covering the edge of the road. He felt he was stepping into the cover of a pretty chocolate box he’d picked up from a tourist shop. He expected a group of children would hop out of a wardrobe next to the cottage and begin exploring the snow-covered countryside.

The key was under a stone next to the flowerpot, as Oliver had messaged him.

Unlocking the door, Kyle entered a low-ceilinged room with two squashy sofas covered in multi-coloured throws facing a metal wood burning stove. The far wall had a wooden dresser covered in old china ornaments with a wooden bookcase stuffed full of books. A small galley kitchen ran along the left wall. Next to the sink was a large black metal thing he assumed was some sort of oven slash heating machine.

The room was so cold Kyle could see his breath in the air. He looked at the books—art deco, antiques, two, no, three, no four Marilyn biographies, a section of picture books of her film stills, and some books about classical music.

As he stood staring at the wood burner, wondering why anyone would choose voluntarily to have to light something when a radiator did much the same job, without all the mess and time he knew it would take to light, the only sound he heard was his own breathing. Deciding to turn on some music to get rid of the unnerving silence, he discarded the piles of classical music and put on a Now album from a few years ago.

Right, now to try and light the stove.

A New Life For Christmas by Liam Livings

A house exchange between two single men leads to a romantic new life for both of them.

Oliver and Kyle live thousands of miles apart, but each needs a break from his current life and love. Enter the Cloud B&B website, a wonderful new way to exchange homes for the holiday. They both muster their courage, and decide to visit another continent for Christmas.

In the UK, Oliver has been pining after his neighbour for far too long, living his comfortable but quiet life in a town in the New Forest. When his crush moves on in the worst possible way, Oliver is seduced by the chance to stay in fun-loving, sunny Miami.

In Miami, Kyle is a club owning workaholic, who suddenly discovers the man he lives with has been unfaithful. Yet again. As consolation, Kyle is tempted to see first hand the picturebook charm of the New Forest in winter.

Both of them find not just a new setting but a new romance. Oliver makes a big effort to shed his inhibitions and meets a musician, Mark, who plays in the Florida bars, and who may be just as cautious and polite as Oliver in making the first move.

And while Kyle’s trying to come to terms with England’s very different culture—and food!—he’s charmed by Oliver’s best friend Edward, who’s bold and sexy, but secretive.

Will Oliver take the leap of faith and encourage a lover who can and will give the commitment he deserves? And will Kyle find a man who can be loyal and also offer Kyle the family life he needs?

But perhaps more importantly—when Christmas is over, can a new life survive?