Welcome back to Mid Week Tease! This week I’m sharing more from Mia’s Wedding, the second book in The Heiress’s Harem series, which released yesterday. I hope you enjoy it! 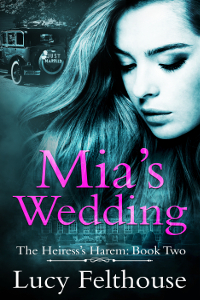 In the few weeks since the death of her father—which had been expected, but the knowledge had made it no less devastating—her life had been turned upside down. Not only had she had crippling grief to deal with, as well as the responsibility and paperwork that went with administering the estate, but she’d had a huge curveball thrown at her, too. Her father’s will, as she had expected, named her as sole beneficiary—excepting some sizeable charitable donations—but there had also been a caveat, something which had been added in more recently. In order to inherit, she had to marry a suitable—his words—man within twelve months of her father’s burial, otherwise her vile, greedy cousin, Quinn, would get everything.

Thrown into tailspin, Mia had, at first, tried to get the amendment to the will disqualified. Her father had been so ill, and on so many medications when he’d changed it that she’d thought perhaps he wasn’t of sound mind, wasn’t making sensible decisions. Unfortunately, the family solicitor had assured her that all the relevant checks had taken place, and that the latest version—and its caveat—were legally binding. Which had left Mia with no choice but to find a husband—no way was Quinn getting his grubby paws on her childhood home and the estate. He had no interest in keeping the business interests going, interests which a lot of people relied on for their livelihoods—Mia included. All he’d do was run things into the ground, sell up, and fritter the proceeds away.

Soon after she’d received the shocking news, two things had happened: her luck had changed, and things had got crazy. She’d met Elias, who was definitely “suitable” husband material, but had also discovered he was into sharing women with his best friend, Alex. In the meantime, she’d been rapidly falling in love with Thomas—who, being the estate gardener, would not meet the stipulations laid out in her father’s will and therefore wasn’t a candidate for marriage.

Fast forward to now, and somehow she was in a loving and very satisfying relationship with Thomas, who, after she’d divulged everything, had given his blessing for her to marry Elias, as well as seeing Alex. She’d gone from long-term singleton to owner of a harem of men in a matter of weeks, and she could still scarcely believe it. It was early days yet, and although Thomas was okay with Elias and Alex being on the scene, she hadn’t yet mentioned Thomas to them. But, given the sharing thing had been their suggestion, she’d be surprised if they had an issue with not being the only two members of her collection. However, when this much testosterone was flying around, anything could happen. She just hoped she was right and that telling Elias and Alex about Thomas wouldn’t screw everything up. Not only was she incredibly fond of both men, and looking forward to seeing what a future with them in her life would be like, but becoming Elias Pym’s wife would solve her biggest and most pressing problem: securing her inheritance.