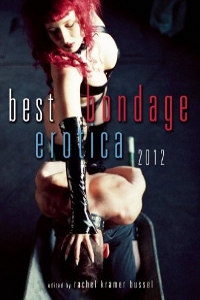 My story, Trophy Boyfriend, appears in this deliciously dirty anthology.

Best Bondage Erotica 2012 fully explores the joys of restraint with stories from top-notch (pun unintended) writers who have mastered the bondage fiction. Editrix extraordinaire Rachel Kramer Bussel lets the reader in on the subterranean world of forbidden desires and sexual fantasies that shock and scintillate as they mesmerize. How do you want to be teased, tied, and tantalized? Best Bondage Erotica 2012 covers all the ways you can get your kink on with stories of spanking, corsetry, rubber, crossdressing, handcuffs, robe, and pleasures that push into new, and exquisitely delightful territory. Surrender to the intense eroticism of bondage and fetish in full flower.

You know how some guys have a good-looking woman on their arm and like to call them their trophy wife, or trophy girlfriend? Well, once upon a time I reversed the trend by having a trophy boyfriend.

Ethan was hot. It wasn’t just me that thought so, either. My friends would go all girly and flirty when he was around, batting their eyelashes and laughing at his lame jokes. We used to say (behind his back, of course – we didn’t want to inflate his ego any further) that he looked like a young Tom Cruise. With his darker-than-night hair, startling blue eyes and movie-star smile, Ethan looked good on my arm, all right.

I guess you’re wondering why on earth I’m talking about him in the past tense, if he was that perfect. The answer is simple: the guy was as dumb as a box of rocks. Sure, he looked good and was hotter than hell in the sack, but he just didn’t have much between the ears. If you ended up on his team during the pub quiz, you’d give up before they’d even asked the first question. Interesting conversations were non-existent, and the chats we did have bored me to tears. There’s only so much sport, reality TV and car talk a girl like me can take.

To say we had an adventurous sex life would be a completely accurate statement. Sure, if we were spending the night together we’d do it before we went to sleep and when we woke up, like many couples. We also played with toys, indulged in role play and all that kind of thing, too. But when we were out and about and the urge became too much, we often didn’t wait until we got home. We did it in grubby pub toilets, the washrooms in upmarket restaurants, parks, gardens, other people’s houses… the list goes on.

We even did it in a theme park once. The place had this deserted old monument that no-one gave two hoots about, so we slipped up the spiral staircase and made the most of the alone time. I never came so hard before in my life. The thought of thousands of people milling around just feet from us got me so aroused that I had to bite my hand to stop myself from crying out as my cunt clenched and squeezed around Ethan’s cock.

As you’d expect in a relationship with no real connection, the novelty started to wear off .Yes, I still enjoyed sex with Ethan, but it became increasingly difficult to overlook the fact that we had no future. Plus the random comments and weird noises he made during sex became more and more noticeable. In the first flushes of lust I’d barely noticed it but now, I just wished he would be quiet.

I decided it was time to call it a day. But I made plans to have some fun with him first. You know, something to remember him by. And vice versa.