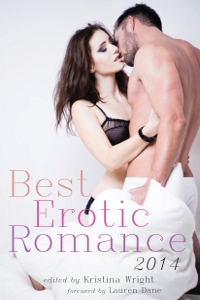 Desire, love and realism are the heartbeat of Kristina Wright’s Best Erotic Romance 2014. From first crushes to new lovers, to married couples who have withstood the tests of time and parenting, these are luscious, heartfelt tales layered with eroticism and emotion. A happily married woman dresses to thrill and discovers how fun it is to break the “Rules” in Emerald’s sizzling story. A devoted couple finds time for lovemaking while juggling the busy whirl of childcare in “The Shortest Day,” by Nikki Magennis. Walking the dog leads to sparks and a red-hot flame in Lucy Felthouse’s “Going It Alone.” This decidedly blissful and deeply romantic anthology is filled with couples in every stage of love and lust who simply can’t get enough of each other.

As I sat at the table cradling my cup of tea, I contemplated making a run for it. Checking my watch, I ascertained that there were still fifteen more minutes before he was due to arrive, so I could easily leave enough money on the table to pay for my drink and go. I’d be hiding behind my curtains at home before he even arrived.

It wouldn’t work, though. He knew where I lived, so if I didn’t turn up, he’d come around to my house to see if everything was all right. He was that kind of guy.

I berated myself for thinking about standing him up. He didn’t deserve that, not one bit. I was just being a wimp. We’d have a lovely afternoon, I was sure of it. After all, we’d already had dozens of conversations and spent quite a lot of time with one another, and yet this was our first official date. The first time we’d be alone together – albeit it in a busy cafe.

The thing that was terrifying me the most wasn’t that this was a date, it was that we’d be there without our buffers. Otherwise known as our dogs, Sparky and Chance.

That’s how we’d met. I’d been walking Sparky through the park one afternoon and spotted a man and his dog coming in the other direction. I’d expected a polite smile and a nod as we passed, but the canines obviously had other ideas. They’d both strained on their leads to sniff at one another, and as I tugged at Sparky’s lead to pull him away, it became apparent that he didn’t want to leave. Nor did the other dog. Sighing, I let Sparky do his own thing for a little while, hoping the pair would tire of their bottom-sniffing and allow us all to go our separate ways.

The other dog’s owner had obviously had the same idea, and we stood opposite one another as our pets examined one another. I had the awful thought that Sparky was going to try mount the other dog and embarrass the hell out of me, so I had to ask, “Is yours a dog or a bitch?”

I heaved a sigh of relief. “Ah, mine too. They certainly seem to like each other.”

We looked down, then back up at each other, smiling.

And that was how it started. We ended up chatting about our dogs; their breeds, their age, funny anecdotes, and so on. The entire time I was thinking about how attractive he was. He had dark cropped hair, lovely hazel eyes and a killer smile. His voice and laugh also had the ability to make the hairs on the back of my neck stand up – in a good way.

By the time we parted ways, dragging our reluctant pets behind us, I had the world’s biggest crush. And I didn’t even know his name.

“Another great anthology from Cleis Press featuring sixteen sizzling stories of passion and romance. Overall I really enjoyed this anthology. I didn’t dislike any of the stories, and I’ll be reaching for my favorite shorts again in the future.” 5 out of 5, Ms Romantic Reads