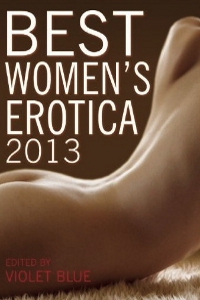 My story, Meet Me at the Spanish Steps, appears in this kinky anthology.

The shy, redheaded heroine of Valerie Alexander’s “Night School” explores her very kinky desires with an unlikely submissive while working at a small-town hotel. In Krissy Kneen’s “Susanna,” a virgin enjoys her first taste of lust and learns that the true language of love has very little to do with words. A burly mechanic rescues the Assistant D.A. and her broken-down car but makes her ear the favor in Jenny Lyn’s “The Tow Job.”

Best Women’s Erotica 2013 is a playbook of delectably sexy scenarios to add to your sensual repertoire. Award-winning editor Violet Blue presents “explicit sex at the dizzying heights of exquisite fantasy with the lights on, and you, the reader, get to see everything.”

Meet me at the Spanish Steps, the text said. It also specified a day and time. The following day, at 1pm.

I’ll text you in the morning and let you know what I’m wearing. Will you do the same?

I replied in the affirmative. Although I knew what he looked like, us knowing what each other was wearing would help us to find each other in the no-doubt huge crowds surrounding the famous tourist attraction. I was glad, because there was no way I wanted to miss out on meeting up with him. My sanity—and libido—were riding on it.

Since I’d been working on the campsite on the outskirts of Rome, I’d been doing my best to learn Italian, and I was improving rapidly. But it would be some time before I progressed to learning the words and phrases necessary for getting what I wanted in the bedroom. As a result, my kinky cravings went unfulfilled, and although I was having the odd fuck here and there with other staff on the site and the occasional Italian, I was desperate to have sex the way I really wanted it. Needed it. I couldn’t ask the English-speaking staff that I went to bed with, because I still had to face them day after day. And with six months left on my contract, the last thing I needed were rumours going around about my unusual sexual appetite.

Which is why I’d turned to the Internet. I found William through a website for Brits living abroad, and from the very beginning I’d been clear that I was looking for sex, rather than love, and that I had particular tastes that I wanted him to cater to. He was more than willing to scratch those specific itches and we went from exchanging emails to text messages, to eventually arranging to meet.

The following morning, I dressed with care, and paid special attention to my hair and makeup. The funny part was, I was paying attention to make sure my clothes were quick to remove, my hair was easily tidied if it got messed up, and that my makeup wouldn’t smudge. After ensuring my bag contained the all-important condoms, tissues and pepper spray—a girl can never be too careful—I hit the road.

By the time I emerged from Spagna Metro station, I ready and raring to go. I was a little nervous, but that was more down to the risk that despite all his assurances, William wouldn’t be able to give me what I so desperately needed. I really didn’t want to be left high and dry. I buried my misgivings deep inside my subconscious and mentally kept my fingers crossed that they wouldn’t come to fruition. Then, after taking a quick peek in the pocket-sized mirror I always carried, I walked along the narrow alley leading from the Metro station out to the Piazza at the bottom of the Spanish Steps.

I was quickly enveloped by the crowds, and I started to worry that in spite of William and I sharing details of our attire, that we wouldn’t find one another. A little while later, I realised my worries had been unfounded. I spotted him leaning against the wall of Babington’s Tea Room, wearing exactly what he’d said he would, and a huge smile besides. Grinning back, I shoved my way past meandering tourists and finally reached him.

“Hi Darby,” he said, stepping forward to shake my hand—very British—then releasing it after the prerequisite amount of time.