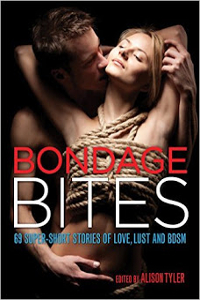 Nicole pushed the key into the door of hers and Steve’s house and let herself in.

His response was muffled. “Hi babe. I’m in here.”

She sighed. Even without asking, she knew where “here” was. The damn office. Or, more accurately, the spare room that Steve had turned into a computer geek’s wet dream. She’d accepted, when they’d moved in, that it would take a while for him to get things set up. It was his home office, so it had to be right. But unfortunately it had turned into a job that was never finished. Everything was functioning, apparently, but he always seemed to be in there, replacing motherboards, hard drives, adding more RAM—she barely saw him.

Passing through to the kitchen, she put her bag down on the worktop and flicked on the kettle. “You want a coffee?” she shouted.

I’ll give you fucking tied up right now, she thought. She’d been a computer widow for months and she was fed up of it. Marching through the house and into the spare room, she prepared to let him have it. But even now, she’d be letting rip to his back. He was under the desk, just his back, bottom, legs and feet visible, and he hadn’t a damn clue she was there.

“I said, do you want a coffee?” she shouted loudly, much more loudly than was necessary, and she got an immense feeling of satisfaction when Steve jumped out of his skin and smacked his head on the underside of the desk.

He emerged slowly, then turned and stood, rubbing his head. “Ow. There’s no need to be like that. That bloody hurt my head, that did. I might have a concussion now.”