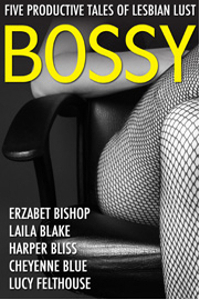 If the characters in ‘Bossy’ prove anything, it’s that getting it on at work doesn’t mean you need to wipe all papers off the surface and get busy on your desk. The settings in this new mini-anthology from Ladylit are as diverse as the positions the ladies in these five stories find themselves in. A doctor finds comfort with a nurse in Cheyenne Blue’s romantic tale of love in the ultrasound room, while Laila Blake’s story shows a professor who can’t resist one of her students on a sweltering hot day in the classroom. Add a maid whose mistress demands full servitude, a sexy mechanic offering roadside assistance and an A-list actress who has trouble hiding her secrets from a Hollywood reporter… and you get ‘Bossy’: five productive tales of lesbian lust.

Caution: This title contains graphic language and bossy f/f sex and is suitable for adults only.

Demelza frowned as the car lurched, made a strange humming sound, then lost power. She pressed harder at the accelerator pedal, but nothing happened. Thinking fast, she hit the button to put on her hazard lights then steered over towards the side of the road, hoping like hell she had enough momentum to get there. She didn’t want her car sticking out into the motorway traffic, and she didn’t particularly want to attempt to push the vehicle, either.

Her silent prayers were answered as she managed to get safely onto the hard shoulder, where she pulled on the handbrake and turned off the engine. Only then did she express her frustration.

“Fuck!” she slammed her hands on the steering wheel. “Fuckshitwankfuckbollockscunt!”

Having let some irritation out, she felt more able to get her arse in gear and start tackling the problem. Demelza didn’t have the slightest idea how cars worked—she could put petrol in, fill the windscreen washer bottle and that was about it—so roadside assistance was the only option.

She vaguely remembered being told at some point that it was easier for a breakdown service to find you if you used the static phones at the side of the motorway, rather than a mobile phone. So she grabbed her handbag and keys, locked the car and started walking along the darkened road. Demelza wanted to place the call and get back to her car quick smart. She’d also heard it was safer not to wait in your car when broken down on a motorway, but it was better than freezing to death or being petrified to death.

Before long, she’d reached the little orange box containing the phone. Making the call, giving all the relevant details and waiting for them to confirm her location, she kept pretty calm. But after hanging up—and being given reassurance that someone would be with her inside the hour—the emotions kicked in. Not only was it dark, it was cold and miserable too. A fine mist hung in the air, refusing to turn into rain but making everywhere damp anyway. The traffic that zoomed past did little to remove Demelza’s unease. It felt lonely at the side of the motorway, without the security of being in her moving vehicle. If a serial killer appeared on the verge and dragged her away, it was unlikely anyone would notice. And if they did, by the time they reacted, it would be too late. She’d be dead, and her killer would have already scarpered.

Muttering to herself, Demelza picked up her pace back to the car. She managed to find a positive in the situation—at least she was wearing sensible shoes, so walking wasn’t too hazardous. It wasn’t much, but it was something and soon she was in the relative safety of her car, the doors locked and a blanket clutched around her. Without the engine functions, the heat had rapidly disappeared and Demelza hoped her rescuer arrived before she turned into a human icicle.

Fortunately, the fact she was a woman alone, and it was night time meant that she was a priority, and a van decorated with the recovery service’s colors and logo pulled up behind her car in around forty minutes. And it wasn’t a moment too soon—the temperature in the car had dropped further in that time, and Demelza could see her own breath misting in front of her.

Pulling the blanket more tightly round her, she unlocked the doors and got out of the car, shivering as the chill and damp hit her. Turning, she watched as the person inside the recovery van opened the door and stepped out. The vehicle’s interior light shone on her rescuer, and in spite of herself, Demelza was surprised to discover it was a woman—it wasn’t sexism speaking, rather the fact that there were still so few women in the motoring and related industries.