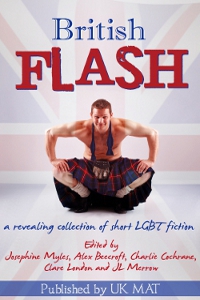 A revealing collection of short LGBT fiction, available free of charge from Smashwords

Enjoy this entertaining collection of flash fiction stories, and their short and sweet expression of what it means to be queer in Britain, past and present. All these stories reflect the iconic sights and national character of the British Isles: a taste of our idiosyncrasies and eccentricities, but also an unashamed representation of the love, loyalty and laughter of our people.

Follow the British way of life from historic villages to modern cities, from the countryside to the sea, through history and with a fantasy twist, in gardens, shops, campus and the familiar, much-loved local pub.

This anthology is a souvenir of the 2011 UK Meet, an occasion for GLBTQ supporters to get together in a relaxed setting to celebrate and chat about the fiction community they love.

While the Boys Are Away

“C’mon,” said Amelia. “Let’s go get showered while the boys are doing their cavemen piece.”

Gemma giggled. Her boyfriend Rob and Amelia’s bloke Tony were hunkered over the barbeque, desperately trying to get it to light. The breeze wasn’t helping, and the boys were getting increasingly irritable. It was time to make a hasty retreat before they started beating their chests.

The girls dashed into their respective tents and grabbed their stuff. As they started walking across the campsite to the shower block, Amelia said quietly, “I don’t know why we can’t just go to the pub, like normal people.”

“Heard that!” yelled Rob, glowering at them both. The girls scurried quickly away, not wanting to incite any more of the boys’ wrath.

Pulling the door shut behind them, Amelia remarked, “Ahh, it’s lovely and warm in here. Ya can’t beat a heated toilet block.”

“Too true,” responded Gemma, moving over to the sinks to put her things down. She looked around, checking that they were alone. “Now, let’s get you out of those wet clothes.”

“Wha?—” before she could ask the question, Gemma had depressed the tap, filled her hands with water, and thrown it at Amelia.

“You bitch!” Amelia squealed, running over to Gemma. She began to tickle her, knowing the other girl would be helpless with giggles in a matter of seconds.

As she tried to block Amelia’s onslaught, Gemma sucked in a breath and gasped, “I thought we were going for a shower.”
Relenting, Amelia said, “You’re right. We were.”

Dropping a kiss on Gemma’s tousled head, she grabbed their stuff and headed for the biggest shower cubicle. Her lover followed, almost recovered from her giggling fit. Sliding the lock home, Gemma turned, only to see that Amelia was already stripping.

“Eager, aren’t we?” Gemma said, a smirk pulling at the corners of her mouth.

“Shut up and get undressed,” Amelia responded, grinning at her. “We can’t be too long, or the boys’ll send a search party. Remember last time?”

Gemma laughed as she thought about the last time they’d come camping. The girls had been making love in the shower when they heard a knock at the door and a childish voice call out their names. It turned out that Rob and Tony had sent the little girl from the pitch next door to see if they were okay. Little Amy was very confused when both girls emerged from the same cubicle, and they’d had to come up with some lame excuse about Amelia having tangled her hair in her necklace.

Luckily, Amy had been young and naive enough to swallow their excuse. The boys had never been any the wiser. Still, they didn’t want to take any chances, especially since it could be the campsite warden knocking on the door next time, and they’d have to come up with a watertight excuse to fool an adult.