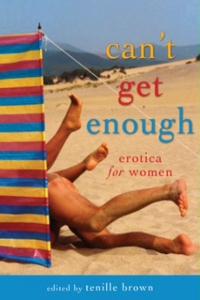 Contains my story, When He Gets Home.

Veteran erotica author and first-time editor Tenille Brown has collected stories for Can’t Get Enough that highlight the essence of insatiable desire. With contributions from familiar names like Rachel Kramer Bussel, Jacqueline Applebee, and Giselle Renarde, along with newer voices like Monica Corwin and Beatrix Ellroy, this is a book full of diverse and dynamic characters who are bold and daring and even some who are surprisingly subtle. The authors here knock the Can’t Get Enough theme right out of the park with stories that will leave readers as breathless as the characters they’re reading about, dying for more.

As soon as Nina heard the rumble of her husband’s car engine as it pulled onto the drive, she dropped her book and all but leapt out of her chair. Moving fast across the living room, then through the kitchen, she flung open the internal door which led into the garage. Walking in, she closed it behind her. Standing, arms folded, one foot tapping repeatedly on the floor, she waited for Owen to drive the car into the garage, then press the button which shut the door behind him and the vehicle. When the bottom of the up-and-over touched concrete and the car’s ignition was shut off, she practically ran around to the driver’s side and tugged the door open before Owen got the chance.

The sight of his wife standing there, an indeterminable expression on her face, made Owen’s heart sink. He had no idea what was going on, and she never normally came into the garage to meet him when he got home. She didn’t look very happy, either. He didn’t speak, as he suspected whatever he said would be the wrong thing.

Nina didn’t speak, either. There were no words to explain what she was thinking and feeling right now, so she decided that instead of talking, she’d just act. That decided, she leaned forward and touched the button to drop the back of the seat Owen was sitting in. She smirked at his expression—the poor man had no idea what was coming to him. She was going to make sure he’d never forget it, either.

Owen’s body jerked as he responded to the shock of the back support disappearing from behind him. Nina’s expression still looked strange—yet eerily beautiful—and when she rested a palm on his chest and shoved him, he landed on the now-flat backrest with a thump which knocked the air out of his lungs. “W—what are you—” His hastily spoken words were cut off when Nina straddled his lap and silenced him by leaning down and pressing her lips to his.