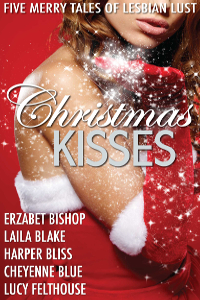 Contains my story, Not Christmas Shopping.

’Tis the season to be… frisky. The Ladylit Fab Five have come together once more for a sizzling seasonal mini-anthology. Decorating the tree or working the holiday shift, at a family party or avoiding the shopping crowds, the ladies in these stories find reason to get merry in any circumstance.

Caution: This title contains graphic language and christmassy lesbian sex and is suitable for adults only.

The Girl in the Purple Shirt by Cheyenne Blue

Not Christmas Shopping by Lucy Felthouse

In December by Erzabet Bishop

Erin sighed as she attempted to make her way along Broadway, squeezing between the throngs of people who thought it was a good idea to stand right in the middle of the pavement and look at maps.

She sighed again after being smacked in the legs by a bunch of bulging shopping bags. And bloody hell, there was something hard in one of those! Christ, the sooner she got out of this insanity, the better. Why on earth did people voluntarily come to New York City at this time of year? Naturally it was busy all year round, but the period between Thanksgiving and Christmas had tourists piling in seemingly by the million to spend their cash on presents for the holiday season. As though nowhere else on the planet had such things as shops.

And here she was, stuck in the middle of it. Definitely not voluntarily, either. She’d actually done her best to get out of the meeting with the New York office of the publishing house she worked for, or to get it moved into the New Year, but her boss was having none of it.

“Erin,” he’d said, fixing her in his blue glare, “you’re going, all right? I can’t go, and you’re the only other one qualified enough to go. And besides,” he added, attempting a sweet smile which made her want to vomit, “you’ll be able to go Christmas shopping while you’re there.”

There had been no point telling him that he wasn’t actually doing her a favour, that the last thing she wanted to do in New York City was shopping—Christmas or otherwise. She hated shopping generally, and more specifically at this time of year. The internet was a blessing, allowing her to buy as many presents as humanly possible and have them delivered right to her door. Then she only needed to pop out for a few more bits and pieces that she couldn’t get online. Even then, her method was: enter shop, grab required items, pay for items, leave shop. There was no browsing, no messing about. She travelled on the Tube twice a day during rush hour as it was—she didn’t want to stand in pushing, sweaty, impatient crowds for one moment longer than was absolutely necessary. Then head out into the malls and try to buy things while those same pushing, sweaty, impatient people also tried to buy things.

That wasn’t to say she didn’t like cities. She did—living in London, one had to, really—but it was the people she wasn’t keen on. Or, more specifically, the volume of people. Which was why, back home, she escaped to one of the parks, or into the quieter suburbs, as often as she could. For her own sanity.

And she was doing the same thing right now. She’d barely stopped in the last twelve hours—having taken an overnight flight from Heathrow, arriving at the Manhattan office at nine a.m. for the ten a.m. meeting. She’d had time to shower and change, luckily, and as soon as the meeting had finished at one p.m., she’d made her excuses—feigning exhaustion—grabbed her small, wheeled suitcase, and left. All the while trying to push away the irritation she felt at being made to come so far for a meeting which had lasted barely half a day, and which could easily have been done via teleconferencing. Plus it had also put her behind on other work she should have been doing back at the London office.

Having headed to the nearby hotel—the very expensive, luxury accommodation was the single good thing about the trip—she’d changed into street clothes and flat, comfortable shoes, pulled on her thick coat, hat and gloves, and dashed back out into the madness. But only temporarily—in a few minutes she’d be entering Central Park. Yes, there would still be plenty of people around, particularly at the southern end of the huge green space, but there was more room, and somehow, when one crossed into the park, the atmosphere changed. People were no longer running around like the world was ending, or pushing and shoving. Granted, they still stood in the middle of the paths looking at maps, but at least there was plenty of room to manoeuvre around them.

Erin’s irritation was already seeping out of her, and she wasn’t quite there yet. Just Central Park South to cross, a short walk to the nearest entry point, and she’d be in. Even the chilly air and the slushy, slippery pavements, bearing signs of recent snowfall, could do nothing to dampen her enthusiasm.

She’d never actually taken the time to confirm her suspicions with a New Yorker, but she guessed that she wasn’t the only one that thought Central Park was a refuge. In a crazy, busy, always-on-the-go city like New York, having somewhere to just be quiet and peaceful, and to relax, was a must. It was just so noisy everywhere else—with car engines roaring, sirens blaring, horns honking, construction workers banging and drilling away… the park was probably the closest thing to peace on the island. Especially if you disappeared deeper into its green sanctuary, which was what Erin intended to do.