From Top to Bottom 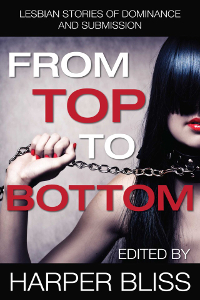 Contains my story, The Antisocial Sister.

Brace yourself, because there will be pain—but of the oh, so pleasurable kind. There will be begging and there will be bruises, but all leading to an obliterating climax. The fifteen lesbian stories of dominance and submission contained within the pages of From Top To Bottom will make you flinch like the characters do, will make you squirm and want to turn the pages faster and faster. You will find first-time players and long-term couples. A plethora of paddles and the occasional flogger—and a great number of sore backsides. Be warned.

With stories from experienced writers at the top of their game and thrilling new talents alike, all of them exploring power dynamics from top to bottom, this collection is kinky, daring and, at times, deliciously violent. Read at your own risk.

Patricia unlocked the front door of her sister Maria’s house and crept inside. She had no idea why she was creeping, though, considering no one was in. Which, of course, had been the whole point of her turning up the Saturday night before Christmas to deliver presents. Maria and her husband, Joe, would be at his work’s Christmas do and their kids were at Joe’s parents’ house, leaving Patricia free and clear to do her Santa bit.

Only, as soon as she put the gift bags in her hands down and scurried along the hallway to turn the home security alarm off, she knew something was wrong. The alarm wasn’t on. And not in a million years would either Maria or Joe leave the house empty without setting it. They were paranoid to the max, a situation exacerbated by all the warnings on TV and in the papers about scumbags breaking into homes at this time of year specifically to steal Christmas presents.

Therefore, Patricia came to the conclusion that either there was a burglary taking place at that very moment, and they’d managed to turn the alarm off, or there was, in fact, someone in. Neither situation was good, in her opinion, but as she tiptoed towards the living room, she wished heartily for the latter. Even a bollocking from her sister for sneaking into the house would be preferable to said sister being robbed.

Ready for either situation, she slipped her hand into her pocket to retrieve her phone, pulled it out and pressed the number nine three times—then kept her thumb hovering over the green button, just in case.

Carefully moving back and closing the front door—if there was a burglary taking place, she didn’t want to make it easy for the buggers to escape—Patricia then re-trod her steps, continuing towards the living room. A dim light shone from beneath the door—torchlight?

With her phone in a death grip, Patricia opened the living room door as quietly as possible, not wanting to alert any intruders to her presence, at least not until she’d phoned the police.

As the room beyond gradually came into view, Patricia mercifully neither heard nor saw any signs of anything untoward. Rather, she discovered that the source of light was coming from the television, as was a low-level murmuring. She frowned. Had Maria and Joe not gone to the Christmas party after all? But their car hadn’t been parked out front…

“Hello?” she said, her tone tentative.

There was movement from the direction of the sofa, then a tousled dark head appeared over the back. “What the—oh… so you’re the antisocial sister.”