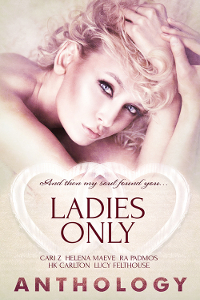 ‘Worth A Shot’ by Cari Z

Samara Wynne thinks she’s finally found the perfect roommate, but Katie’s keeping a secret that could turn their dream home into a nightmare.

Samara Wynne was dreading getting a roommate, but Katie Hansen changed her mind. Katie is everything she could want: she likes Sam’s cooking, she shares her dog when Sam’s feeling low, and there are signs that Sam’s one-sided attraction to her renter might not be so one-sided at all. Katie is safety conscious to the point of paranoia, though, and she won’t quite tell Sam why.

When a thoughtless mistake by Sam leads to their home-sweet-home being violated, it’s the beginning of the end of everything she had hoped for them. With no home, and no Katie, what does Sam have to look forward to anymore? Fortunately for her, Katie isn’t as ready to give up on them as Sam thought.

‘The Woman Next Door’ by Helena Maeve

What’s a girl to do when her arch nemesis moves in next door?

After months of endless renovations, Ziva can’t take the racket anymore. Her commissions aren’t going to fulfill themselves and she’s nowhere near ready for her next exhibition. She is, however, more than able to give her new neighbors a piece of her mind—until she discovers that the people moving in next door aren’t new faces at all.

Yvonne Barros couldn’t be less of a stranger. Eight years ago, Ziva might even have said they were friends. That was before Yvonne destroyed her business and nearly drove her to bankruptcy. Almost a decade later and Ziva desperately wants to hate the woman who stole everything from her. Yet with every run-in, Yvonne proves to be a changed person, her sharper edges chiseled smooth, her losses now worn on her sleeve.

Unexpectedly thrust into close quarters by their living arrangements, it’s not long before Ziva and Yvonne rekindle their old connection—and with it the spark of mutual attraction. But Yvonne misled Ziva once before. What’s to say she won’t do it again—especially when she is spotted embracing another woman?

I am Molly Knowles. Please, marry me.

Young chef Molly Knowles travels with her tiny blue house through the country. She isn’t sure what she is looking for, but when she tastes the food of Chiara Loss, she knows that she has found it.

After two years of hiding from the world, mourning the unexpected death of her lover, Chiara is ready to fall in love again. When Molly stumbles into Chiara’s life, both women have no choice but to accept that there is no way back.

Sometimes one day filled with food and love is all it takes.

‘In the Flesh’ by H K Carlton

Working undercover, nothing is ever as it seems…

Assigned with the unenviable task of taking down the untouchable Travino crime family, undercover ATF Agent Kate Benson and her veteran partner Mike Pennington are thrown into the seedy underworld of organized crime.

Kate is asked to draw on her past experience as a dancer and infiltrate one of Travino’s skin clubs, the In the Flesh.

Posing as Vivienne, Kate meets exotic dancer Carly. From the moment they first dance together, she can’t seem to keep her mind or her greedy hands off the dynamic dancer. Together they sizzle on-stage and off. She soon realizes she’s falling for Carly but knows from past experience beginning a relationship built on half-truths is a recipe for failure.

As Kate attempts to straddle the line between doing her job and being as honest as she can be with Carly, while still maintaining her cover, Kate and her partner, Mike, are caught snooping around the club, after-hours by none other than the mob boss himself.

And Kate knows there’s not a two-step in the world that can save them now.

Can Jessie work with a woman with the looks of a pixie and the personality of a dragon to complete the most important task of her career?

Shop-fitter Jessie is sent to London’s Oxford Street to work on a flagship store’s front window overnight. It’s the first time she’s completed such an important task by herself, but the plans and organisation are solid—it’s just a case of getting it turned around before the store re-opens the following morning. What she’s not betting on, however, is the woman in charge of the project—Edith. She has the looks of a pixie but the personality of a dragon, and it soon becomes clear to Jessie that the job isn’t going to be plain sailing, not with Edith being awkward and putting Jessie down at every turn. As the hours drag on, Jessie somehow manages to peer beneath Edith’s frosty exterior, and much to her surprise, she kind of likes what she finds. But will she abandon her principles—and potentially risk her job—for a one-off thing?

With a sigh of relief, I followed the satnav’s instructions and indicated right, swinging the van into the side road off of London’s Oxford Street.

“You have reached your destination,” remarked the posh voice coming from the machine.

“Thank fuck for that,” I shot back, removing the device from the windscreen and wiping at the tell-tale ring it left behind on the glass with my sleeve, hoping to remove any temptation for potential thieves. No doubt they swarmed around this area, tourist Mecca as it was. I didn’t want them to catch me out.

I stowed away the satnav, switched off the van’s ignition, and grabbed all my stuff. Hopping out onto the road, I locked the van and pocketed the keys. Then, wiping my damp palms on my black work trousers, I approached the rear door of the shop where I was to work.

Come on, get a grip, Jessie! You may be new at this, but you know what you’re doing. You’ve got this.

I wasn’t totally insane to be nervous. I’d been working for the shop-fitting company for just over a year now, and it was great. I really enjoyed the work, the variety. But this was the first time I’d been sent out on a job by myself. It hadn’t been intentional, either—the job was last minute, and the client had made it worth my employer’s while. Normally there’d been a team of two coming here, but there was another big job, one that needed the more experienced fitters on board. Therefore I’d been pulled off that task, in order to do this one. Alone.

Adding more worry was the warning one of my colleagues had given me on finding out where I was being sent. “You watch out for that Edith woman, Jessie. She may look like a pixie, but she’s actually more of a dragon. She frightens the bloody life out of me.”

The warning ringing in my ears, I took a deep breath and pressed the doorbell. I could do this. I could.I’d made it all the way from Leeds to London, navigating busy motorways and the complete insanity that was England’s capital city, venturing right into the heart—the craziest of the crazy. Fortunately, by the time I’d hit the West End, the traffic wasn’t too bad, given that the shops were closing and rush hour had been and gone. There were still morons galore, naturally—honking taxi drivers, swerving, lane-hopping cyclists, oblivious rickshaw drivers, suicidal pedestrians—but I’d kept my cool throughout, telling myself I was so close to the end of my journey that I could almost touch it. Taste it.

And here I was, at the back entrance of the flagship store of the world-famous fashion chain, ready to change over its window display in time for when the shop reopened in the morning. I glanced at my watch, relaxed a little. It was ten p.m. Eleven whole hours until opening time. No problem, not even for a relative newbie like me.

The door opened a crack and a sliver of a dark face peered out at me. “Yes?”

“Oh, hi. I’m Jessie—from the shop-fitters? Here to work on your window display?”

The woman—the voice had given it away, as she was still peering through the crack between the door and its frame—eyed me up. The black trousers, black T-shirt, black fleece—the latter two bearing the name of the company I worked for, clearly weren’t enough. Turning her attention to the van behind me—emblazoned with the company name in huge letters—she now seemed convinced.

“All right,” she said, opening the door wider and stepping back to let me through. “Come on in.”

“I’m Jacqueline. Edith’s already in the window. She’s the one in charge.”

I nodded. “Okay—lead the way.” I followed Jacqueline through the dimly lit storeroom. I’d known instantly she wasn’t Edith, because she looked nothing like a pixie. More like a goddess. She had a curly black afro, curves you could lose yourself in for days, and a wiggle that would have turned me instantly if I wasn’t already into women.

Blinking as we emerged into the blazing lights of the shop floor, I continued in Jacqueline’s wake, adjusting my ponytail and fixing a smile on my face as we grew closer to the window…and Edith. She was the big cheese—when it came to the window design and execution, anyway—so I needed to make a good impression. Hopefully she’d give good feedback to my boss, and I’d get more projects like this in future. Maybe even a raise—a girl could dream, right?

“Hi,” I said as we came within a couple of paces of my soon-to-be workspace. “I’m Jessie. Pleased to meet you.”

After a brief pause, the pixie took the hand I was holding out and shook it. Firm, confident, but brief. She was no-nonsense, this woman. But I’d known that already.

“…I loved this Anthology. Each story was different and has a little of everything for anyone into FF Contemporary.” 4.5 out of 5, Alpha Book Club