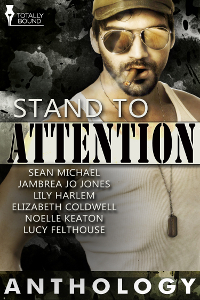 Hammer let Lane drive him away, but now he’s determined to make Lane the one who almost got away.

Lane lost his legs while saving his unit overseas. It’s been two years and he’s doing his best to come to terms with things, including the fact that he dumped his lover to free the man up from being stuck with a gimp for the rest of his life. Luckily, Lane inherited his Gramps’ cottage — it just needs some renovations to make it wheelchair friendly. He’s determined to make the best of what he’s got.

Hammer was one of the men Lane saved… and his lover while they were in the army together. He let Lane drive him away back when the man first got hurt, but now he’s hunting Lane, determined to make Lane the one who almost got away. Will Lane be able to see past his legs far enough to realise Hammer’s in it for the long haul?

‘On the Home Front’ by Jambrea Jo Jones

Forgiving yourself is the hardest battle…

Peter “Bulldog” Jakes killed his mother. People tell him it isn’t his fault, but he is just as guilty as if he pulled the trigger. Bulldog knew being in the Army Special Forces would eventually hurt his family.

Moby Edwards’ heart aches for his First Sergeant and he wants to help, but Bulldog blows him off — every time.

When Bulldog is forced to take leave, Moby follows, but will things out of their control ruin what could be the healing power of friends turned into lovers?

‘Who Dares Wins’ by Lily Harlem

When secret service becomes not so secret servicing by not one, but two sexy soldiers, Ken learns that dreams can come true in explosive style!

Waiting for my SAS husband Jack to come home safe and sound is always a gut-wrenching, heart-twisting time. I have no idea where he is, what jungle swamp he may be lying out in or desert he might be marching across.

So naturally when he returns to me, our emotions can’t fail to run hot and our lust for each other cranks up to sky-high levels. But the one thing about Jack is he lives for the extreme and seizes the moment. I really should have known what would come of me telling him my wildest fantasies.

Oh, yes, he’s a guy who gets results…and when he brings home his colleague Slider, equally tough, equally rough, the pair of them can’t fail to hit the target. That target happens to be lucky old me and I head off on the ride of my life…

‘An Act of Duty’ by Elizabeth Coldwell

When duty becomes mixed up with desire, can a battle-scarred soldier leave behind the horrors of war and enter a world of fantasy and fulfilment?

For Corporal Mark Stockdale, a trip to Amsterdam won’t just provide some much-needed R and R away from the horrors of the Afghanistan battlefield — it’s also a way of keeping a promise to a fallen comrade. But violence has a way of seeking Mark out, even in the most peaceful of locations, and when he stops for a drink in a quiet bar, he finds himself stepping in to help its owner, Robin Sneijder, fight off a group of opportunist thieves. Robin shows his gratitude, and Mark is stunned by the depth of the passion between them, and when Mark wakes in the night from a vivid nightmare of the attack that killed his best friend, Ozzy, Robin is there to comfort him.

Reader Advisory: This book contains graphic descriptions of a roadside explosion, and acts of domination and submission between men.

When it comes to choosing between advancing his career in the army or being truthful with the man he loves, Patrick learns everything ultimately boils down to trust.

Ambitious army captain, Patrick Bosworth, is eager to advance in his career so that he can live up to his family’s distinguished legacy. But having been passed over for promotion to major twice already, Patrick fears his career has stalled. He worries he’ll never match the accomplishments of other family members, especially his brother, a Bronze Star recipient recently promoted to lieutenant colonel.

When a superior office suggests a way to get the promotion that involves gathering information on a fellow army captain in the Medical Corps, Patrick reluctantly agrees to participate. He regrets the assignment almost immediately, especially when he falls for Craig, the guy he’s supposed to be investigating.

When he forms a passionate and intense bond with Craig, Patrick finds it difficult to separate where his professional obligations end and his personal feelings begin. After working for so long to prove himself a worthy member of his accomplished military family, Patrick has to decide if finally finding the love of his life is worth sacrificing advancement in the army, or even giving up his career itself.

‘Letters to a War Zone’ by Lucy Felthouse

Bailey Hodgkiss is lonely and dissatisfied with his boring life as an insurance broker. In an attempt to shake things up a little, he signs up to a website to write to serving soldiers. He’s put in touch with Corporal Nick Rock, and over the course of a couple of letters, the two of them strike up a friendship. They begin to divulge things that they perhaps wouldn’t have said in person, including their preference for men.

After clicking all the available links on the website to find out more about it, Bailey decided to go ahead and sign up. He’d never know what it was really like unless he gave it a go.

He’d read about the site in an article somewhere, about how it linked people with serving soldiers, pilots, marines and sailors in order to write to them. It had been proven that receiving mail—even from someone they didn’t know—improved military morale. It sounded like a damn good use of time to Bailey, and it would be interesting, too.

He began typing his details into the online form. Of course, the chances were that he’d be paired up with a man, given the ratio of males to females in the forces. It didn’t matter, though. He could still exchange letters with a guy, become friends. It seemed like such an old-school way to communicate with someone, given how technology had come on over the years, but at least it was different. Perhaps it would give him something in his life to look forward to, something other than getting up, showering, going to work, coming home, eating, watching television and going to bed. The watching television—and even the eating—were occasionally replaced by nights out with friends or seeing family. Weekends were spent cleaning, washing clothes, gardening and odd jobs. Dull stuff, in other words.

He had an utterly mundane life, and Bailey knew it. It wasn’t even as if his job was exciting. Insurance broking was hardly thrilling, game-changing, or going to save the world. He didn’t expect having a pen pal to change his entire life, but it would certainly break the monotony. Hopefully.

He went through the various steps to fill in his details and create a profile, then continued right through to the information on actually writing and sending the letters. It looked straightforward enough.

His mind made up, Bailey immediately went in search of a pen, some nice paper and an envelope. Armed with a print out of exactly what to do when the letter was finished, he settled down at the kitchen table. Instantly, his mind went blank. What the fuck was he meant to say? He didn’t know any soldiers or other military personnel, didn’t know anything about their lives, other than there was a great deal more to it than shooting people and being shot at. His own existence was so fucking boring that he didn’t want to write about it. Unless there were any insomniacs in Afghanistan—telling them about his day would solve that particular condition right away.

After chewing on his biro until it broke, covering his lips and chin with ink, Bailey replaced it, resolving to try harder. He’d tell his pen pal the bare essentials about himself, then ask lots of questions about them and their work. That was bound to rustle up some conversation.

That decided, he began to write, absentmindedly swiping at his inky skin with a tissue. He’d have to scrub it off when he was done with the note. His wrist and hand had begun to ache before he was halfway down the page. He rolled his eyes. He sat on his arse at a desk all day, using a computer. As a result, even writing something short by hand was hard work! There was no way he was going to divulge that particular piece of information to someone that was willing to lay down their life to protect their country.

He just about managed to fill a single side of the A5-sized paper. And that was only because he’d formed large letters and spaced his words and lines out plenty. But he tried not to worry—at least he’d finished it, his first letter to a war zone.

He read through it carefully, relieved to find no mistakes. He’d forgotten how much more difficult—and messy—errors were on the written page. Computers let you edit and rewrite to your heart’s content. No correction fluid or crossings-out necessary.

Finally, he addressed the envelope. It felt like the longest address ever. The area and country was bad enough, even without including the soldier’s name and BFPO address. But it was done—Bailey Hodgkiss had penned a missive to Corporal Nick Rock, currently stationed at Camp Bastion, Helmand Province, Afghanistan.

Now he’d just have to post it and wait for a reply. The website had said his missive would take between one and three weeks to reach Corporal Rock. Then he had to allow for time for him to read it and send a reply. It could be around six weeks before he heard anything. If he heard anything at all.

“Written by a very talented group of authors …but they all come together to bring us tales of love, laughter, danger, betrayal, passion, hope, and absolutely blazing hot sex. Each story has their own twist on the HEA ending, and I found myself enjoying each and every one of them. If you’re looking for an excellent way to pass the time by reading stories that offer glimpses into the way the love, then you need to give this anthology a try.” 5 out of 5, Mrs Condit Reads Books