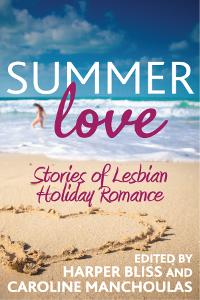 Sun-soaked beaches, glittering blue pool surfaces and oceans painted by an orange-hued sunset have one thing in common: they’re the perfect background for falling in love. Who hasn’t felt that first wave of butterflies rise deep in their belly while pool side? Or that first quickening of the pulse when lounging on a lush patch of grass during a music festival? Summer is the perfect time to indulge in that sudden rush of first love or, equally so, the warm grip of long-fostered feelings for another woman.

This collection of fourteen stories runs the gamut of lesbian holiday romance stories. An Australian cookery course, a Belfast coffee shop, and even a romance writers’ conference are some of the backdrops for the summer love that unfolds in this lesbian romance anthology. distance between cities . Tamsin Flowers’s Drive Me Crazy takes place during Glastonbury, while Katya Harris’s sensual tale of passion between long-time lovers is entirely set by the side of the pool. Newcomer Brooke Winters brings us an irresistible tale of a woman running into a Mistress she’s played with in Spain, while Lucy Felthouse’s heroine gets much more heat than she bargained for when she goes volcano-watching on Lanzarote.

With stories by highly rated authors, including Annabeth Leong, Allison Wonderland, Erzabet Bishop and Harper Bliss, this collection is the perfect sensual companion to any holiday.

There was an energetic buzz amongst the small group gathered on the tarmac. Morgan completely understood why—she was feeling it, too. The day was dry and warm—pretty much the norm for Lanzarote—the sun bright, and they were about to go and explore a volcanic landscape. On foot.

The Ruta de Tremesana was a 3.5 kilometer walk through the Timanfaya National Park, and a trek Morgan had been looking forward to ever since booking the trip to the Canary Island several months previously. Granted, it would have been better had her best friend, Jenna, been coming too, as originally planned, but her gran’s sudden illness had scuppered that.

It was too short notice to try and reschedule or refund the holiday, so Jenna had insisted she go without her.
“Go on, Morgan, I’m not ruining your holiday, too. You go, have an awesome time, meet a hot girl or two, take lots of photos and get a wicked tan. We’ll book something else once Gran is better.”

Morgan didn’t have the heart to tell her friend that holidaying alone was about as appealing as moldy cheese, so she went along with it. By the time she boarded the airplane bound for the land of sunshine and sangria, she’d convinced herself it wouldn’t be that bad. And she had the Ruta de Tremesana trek to look forward to, if nothing else.

She’d been fascinated with volcanoes ever since she was a little girl, so delving into Lanzarote’s volcanic landscape was a dream come true.

Now she was actually here, ready to embark on the two hour trip, she was raring to go. Her boots were firmly tied, her camera fully charged, her backpack loaded with water. All the assembled tourists needed were a couple of tour guides and they were sorted.

When two outdoorsy-looking locals stepped out from the visitor center everyone had been waiting in front of, Morgan knew immediately which of the two groups she wanted to be a part of.

The young man; dark-haired, hazel-eyed and athletic was handsome enough, if you liked that kind of thing. But Morgan didn’t. Much more to her taste was the raven-haired, brown-eyed goddess beside him. She was tall and slim, with curves in all the right places. Her shorts and t-shirt left plenty of olive skin on show for Morgan to ogle, and her mind immediately wandered down a path lined with nudity and sun cream.

Before she could get too entrenched in her fantasy, the woman—who Morgan guessed was around her age, early thirties—spoke. “Okay, everyone! We are all here, so we are going to split into two groups. Half of you will come with me. I am Riya. Half of you will go with my colleague, Tulio.”

As subtly as possible, Morgan shuffled left, to ensure she was on the correct side of the division when it was made. Her movement paid off, as Tulio pointed at eight people in turn on his side, and said, “You are with me—the rest of you are with Riya.”

Everyone moved accordingly, and those that remained with Riya moved closer to the woman, ready to hear what would happen next.

After explaining the plan and ensuring everyone was properly kitted out—apparently, in spite of very thorough instructions, people sometimes turned up to these walking tours in sandals or high-heeled shoes—Riya moved off, leading them to the beginning of their trek.

Morgan fell into line, deliberately making sure there were a few people between herself and Riya. She didn’t want to be directly behind her, because she knew she’d end up spending more time gazing at those lovely long legs and delicious arse than the scenery—and she’d come a very long way to miss out on the volcanic landscape.