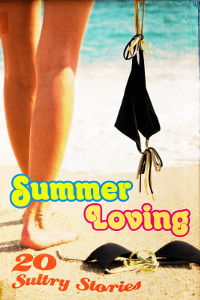 Contains my story, Heat Upon Heat.

Cecily couldn’t tear herself away from the window. Not that she’d tried very hard. She should have been out there, under the sky, under the burning sun. Instead, she stood in the shadows of her bedroom, hoping like hell he didn’t look up and see her standing there, watching him.

He was Ashley, the young man her aunt had hired to replace and paint her garden fence. He was only a few months older than Cecily, almost twenty-two, and he had a body to die for and was currently showing it off as he worked, topless.

She stared, utterly entranced, as he bent and lifted and stretched and painted. His muscles flexing and releasing, his body lithe, tight, strong. The sun beamed down on him, bathing him in light, highlighting the sheen of sweat that covered his beautiful body.

Cecily wanted to lick it off him. Lick every droplet of sweat like he was the world’s tastiest ice-cream. Maybe she’d then cover him in actual ice-cream and lick that off, too.

He looked like a Greek god, and she wanted to worship him. Pull those low-slung shorts down, then his underwear—if he wore any—and take his cock into her mouth, taste the perspiration and the sunshine. Suck and slurp at his shaft until he came in her mouth, filling her until she overflowed, dribbling his nectar down her chin and onto her chest.

It wasn’t just his body that was delicious, though. His face was also perfection—brown hair that had that just-fucked look. Blue eyes that resembled the deepest ocean. Lips so sinful they should come with a warning. A jaw that appeared chiselled from the finest granite.

Cecily watched as Ashley made light work of the awkward fence panels. Her aunt was out, and therefore not supervising him, but he still worked as hard as he had been when Aunt Teresa was there. So that was good-looking, hard-working and honest. Was there no end to the man’s perfection?

He paused, swiped the back of his hand across his forehead, removing the moisture that had gathered there.

Suddenly, Cecily imagined him naked in a cold shower. The chilly water sluicing all the stickiness away, cleaning him. So then she could make him all dirty again. Sweaty, panting. Rolling around in a tangle of crisp sheets, limbs linking, hair standing on end, rocking together.