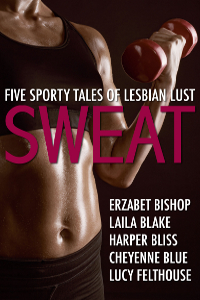 Some girls simply swim or run, while others practice yoga or roller derby, but no matter their preference in sports, all the ladies in this mini-anthology get plenty of girl-on-girl action. Sweat contains five sporty lesbian erotica stories that will make you perspire with desire.

Caution: This title contains graphic language and sweaty lesbian sex and is suitable for adults only.

Making an Impression by Lucy Felthouse

On an Ocean of Skin by Laila Blake

As the woman walked out of the shadows and into the poolside area, Joely was supremely glad of her very dark glasses. It meant she could check out the newcomer without being spotted. And that’s exactly what she did. She kept her head angled as though she was still concentrating on her eReader, but followed the sexy brunette with her eyes.

She observed her look around the area, clearly assessing where the best place to sit was. Joely wished that the only free sun bed was next to her, but unfortunately it wasn’t the case. There were plenty to choose from, and the hottie selected one on the opposite side of the pool. It was both good and bad news. Good, because she could continue to “read” while actually gazing straight ahead. Bad, because the brunette wasn’t close enough for Joely to make out any detail. She could only guess at the other woman’s eye color, skin tone, what she smelled like… damn. Joely really wanted to know what the brunette smelled like.

On another plus note, she very quickly came to the conclusion that the object of her lust was holidaying alone. Once she’d settled onto her chosen lounger, she didn’t look around, or appear to be waiting for someone to join her. Of course, it could just have been that her significant other was out on a day trip or something. But after further examination, Joely didn’t think that was the case. She couldn’t give a concrete reason for why she thought this, it was just a feeling. A very good feeling.

Joely’s next problem quickly presented itself. She’d always had trouble working out whether other chicks batted for the same team she did, and as a result, her past dalliances were few and far between, actual relationships even fewer. It was pitiful, really, and she was fed up of it. Getting laid should be a pleasure, not a trial.

Pondering her problem for a few more minutes, she decided to put an end to it. She wanted to impress the sexy brunette, and that was exactly what she was going to do. Fortunately, she was a very good swimmer and her diving technique was well above average, too. She’d execute a perfect dive into the large pool between them and do a few top speed laps. That was sure to get her attention, and once she had that, she’d set about finding out whether she was in with a chance of removing that little bikini and devouring what was beneath it.

Switching off her neglected eReader, Joely put it carefully inside her bag and zipped it up, then shoved it beneath her sun bed. Standing, she removed her knock-off sunglasses and tossed them onto the towel she’d been lying on. If someone stole those, they’d soon realize their mistake.

Then she strode slowly, confidently, to the deep end of the pool and stood at its edge, her toes curled over the lip. She’d been here several days already, so it wasn’t her first time diving into the pool and it was perfectly doable. And doable in style. Fortunately, there was no one else in the water, so she had it all to herself. For the time being, anyway.

Lifting her arms above her head and angling her body just right, she executed a perfect dive into the pool. The chill of the water opposed to the hot sun of the surface enveloped her, energized her. Surfacing, she swam the few meters she hadn’t already covered to the other end of the pool, then did a neat flip and headed in the other direction. She didn’t stop, didn’t even hesitate as she did several fast, slick lengths. Finally, she felt herself slowing, so she decided to quit while she was ahead. Completing the length, she stopped, hung on to the side of the pool to get her breath. Blood thundered through her veins, her heart pounded. Damn, she felt good.

Pushing her blonde hair away from her face, she chanced a subtle glance in the direction of the brunette. And was astounded to find she’d gone. Bollocks. That was certainly not the plan! Shit, shit and fuck.