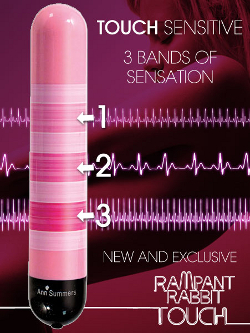 The idea of the toy is that you just switch it on, put it up ‘there’ and let it work its magic. As you can see from the above pic, there are three bands which are touch sensitive, so the deeper it goes, the more intense the vibrations. It’s cool, clever and waterproof. You’ll also need 4xAAA batteries.

The only downside is that its design means that it’s not ideal for clitoral stimulation as if the bands aren’t surrounded by something, they’re not activated. So even when its switched on, if you’re just holding the black part at the bottom, nothing happens. Of course you could hold the vibe in such a way that your hand activates it,  but it may not be the most comfortable.

This is a high quality, unique toy – but if you’re a clitoral orgasm kind of a gal, you might be better off sticking with a trusty rabbit.

Head on over to Ann Summers and check out their range.