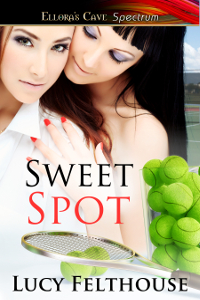 Instead I continued to explore her swollen folds, dipping into her molten core and enjoying the sounds she made and the wriggles that told me I was doing something right. Drawing more juices from her cunt, I spread them over her clit, which was distended, making its presence known. I began to play with it, paying attention to her reactions, figuring out what she liked, what she loved, what she was indifferent to. Learning her body, learning what would make her come apart.

Throughout, we continued kissing, her deft tongue caressing mine, exploring my mouth. Every now and again she would suck on my tongue, my bottom lip, even give the occasional nibble. I mirrored her movements, aware that they grew increasingly frantic—our mouths hungrily devouring, our fingers playing with needy pussies.

Perhaps if I made her come first, once she’d ridden out her climax she’d concentrate on me and let me have my own. It was worth a try—and a damn good excuse to move things on. I could hardly wait to see her orgasm. She was beautiful already—extreme pleasure would only enhance that.

Pulling away from her lips, I leaned back a little until her face came into focus once more, and gave her a wicked grin. “Time for you to come, sweetheart.”

“And what about you?” she replied. I was gratified to hear that she sounded breathless, lust-drunk.

“After. You first.” With that, I gripped her upper arms, spun us both around and pushed her against the wall, careful to avoid the hook that held my wash bag. We’d moved mostly out of the spray now, though droplets still hit the edge of my buttocks, running into my crack, giving a little stimulation.

You can get your hands on Sweet Spot here.