Tag Archives: a contract for christmas 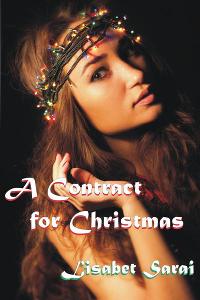 I really didn’t have time to write a holiday story this year. The deadline for my next novel is December 31st, and I’m at least half a dozen chapters from the end. As usual, the holiday season means lots of social events, not to mention end-of-year work responsibilities. Then there were gifts to buy or create, cards to send, decorations to hang, cookies to bake—all the lovely, but time-consuming, activities associated with with December.

Once I’d conceived the idea for A Contract for Christmas, though, the story wouldn’t let me go. I’ve been writing about Isabella, Greg and James for a couple of years now. Every time I sit down to pen another episode, I learn more about who they are and what they want. In this case, I realized how emotionally dependent Isabella was on her dominant husband Greg. I started to wonder whether this was a good thing. Apparently, given the ending of the story, Greg was thinking along the same lines.

So anyway, I stole the time for writing this. I devoted two solid eight-hour days to the process, deferring everything else that I could. I ended up with a massive headache and a stiff back—but I had my Christmas story!

Isabella plans to surprise her husband and master Greg with an intimate Christmas Eve dinner for two. She’s left with only her fantasies of Greg’s dominance to keep her company, though, when a blizzard strands him at an airport a thousand miles away. Then her husband’s best friend James shows up at her door. Over the past year, Greg has invited James to participate in some of their kinky scenes, but Bella has never been alone with the sexy entrepreneur. Should she let him in and risk surrendering to his quiet authority without her master’s permission?

Greg resolves her doubts in an unexpected phone call, ordering her to fulfill James’s every desire. Ever obedient, Bella complies, and James rewards her with a night of soul-searing pleasure. When Greg returns on Christmas morning, he appears unfazed by her powerful new connection to his friend. Instead, he offers Bella an outrageous gift, one she’s not sure she dares accept.

I thought he’d kiss me—I even closed my eyes—but instead he forced me toward the floor. “Crawl to the bedroom, Bella. Now.”

He landed a swat on my upturned butt. The sting set me moving, though obviously not fast enough for James, since he continued to spank me the whole way.

The wall-to-wall carpet in the hallway rubbed my knees raw, and the parquet in the bedroom bruised, but I didn’t care. My only goal was to satisfy my new master. On my hands and knees by the side of bed, I waited for his next command.

James switched on the recessed ceiling lights, which provided a dim, soothing illumination. He surveyed the room. “As I recall, you keep your toy box in the guest bedroom. But I’d be surprised if you didn’t stash a few restraints and such in here, too…” He rummaged in the drawer of the bed table for a moment, then held up a set of fur-lined leather cuffs. “Just as I expected. Up on the bed, Bella. I want you on your back, with your arms over your head.”

I was in position—one of my favorites, to be honest —almost before he’d finished speaking.

“You seem commendably eager to obey,” he commented as he cuffed my wrists and clipped them to the curlicue brass headboard. “Greg certainly has you well-trained.”

Considering the circumstances, I didn’t think that observation required any response.

He captured my feet in matching restraints, then forced my thighs apart so he could bind each ankle to a corner post with Velcro straps. It took no more than sixty seconds for him to immobilize me. As he stood back to admire his handiwork, I wondered for a moment where he’d acquired those skills. Had he and Greg trained as dominants together, or was their mutual interest in kink only a happy coincidence?

Either way, I was the lucky beneficiary.

“Are you comfortable, Bella? No pain?”

“None that I can’t handle, James.”

“Oh really? Guess I’ll have to ramp up the volume. Just a minute…”

Stripping off his shirt with typical economy and ease, he folded it on the vanity stool. His jeans followed. Before he set them down, he extracted his belt from the waist. “I’m going to want this,” he said, laying it alongside my outstretched body so I could smell the leather. “And these, of course.” He dropped five or six condoms onto the bed table.

I couldn’t help laughing. “How many times do you plan to fuck me, James?”

He kneeled between my legs, his engorged cock bobbing as he moved. “As many times as you can handle, woman.” He picked up the belt, running it over his palm. “Then I’ll fuck you some more.”