The Importance of Getting the Girl by Angelique Voisen (@frances_ac) 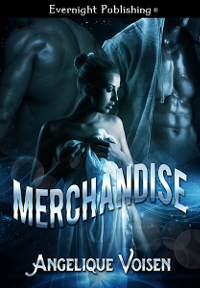 I’m a Joss Whedon fan girl. Two of my favorite sci-fi shows of all time are Firefly and Dollhouse. I also have to confess the little muse in my head kept on badgering me and ultimately pushed me to writing a rough outline of Merchandise right after finishing my fourth run of Firefly.

There’s just something compelling and fun about the space opera genre— limitless possibilities of world building, alien species with extra juicy bits, and inventing gadgets with wacky names. Merchandise was born from the desire to write a  hot menage set in space, with a twist in the end.

One of the things I’d always liked about Whedon’s shows? Most of the protagonists start out as society’s outsiders trying to fulfill some greater purpose. Sadly, answering a higher calling demands a great price— letting thier love lives take a huge hit. Most of the time, they end up not getting the girl (or guy) because he/she either got a) pierced by a couple of wires, Matrix style, or because of b) some supernatural curse or another.

In Merchandise, the two male protagonists come from two different alien races who hold a centuries-old grudge against each other. As outlaws, they exist on the fringes of society. Just when they’re about to take one last job and retire, things don’t go as planned. They’re thrown right into a hot platenary mess and soon find out they’re way out of thier league.

Thankfully though? They do end up getting the girl in the end.

Merchandise Blurb: Unlikely mates Brale and Dyos are space bounty hunters who exist outside the intergalactic planetary laws. Their two races might hold a centuries-old grudge against each other, but war is far from their agenda. They simply go where the space credits goes. When a wealthy client hires them to acquire rare merchandise from a cargo ship, Brale and Dyos leap at the opportunity for easy cash.

The hunters get more than they’ve bargain for when they discover the merchandise is a rare human female breeder. For Brale and Dyos, J is the perfect woman, but when certain politics come into play, J comes with a hefty price tag the two outlaws might not be able to pay.

“Do you trust us?” the Hadarian asked in a soft voice.

He didn’t appear concerned by the chaos occurring in front of them. None of them were. Farr’s harsh voice and the concerned murmurs from the crowd faded away. The only sound J heard came from the harsh thudding of her heart as the Hadarian gently touched her. He brushed the curve of her left cheekbone, the line of her jaw, and the column of her throat with his fingertips. His fingers shook, betraying a hunger he obviously tried to hide from her.

These two wanted her, J realized with shock, wanted her with a consuming hunger so stark it was almost painful. Worse still, the way her body leaned and hungered for more of their touches told J her own hunger was a haunted reflection of theirs.

“I trust you,” J whispered, surrendering the gun to the Hadarian.

“Thank you.” The Hadarian relieved her of her task of pressing the gun to her forehead. For a moment, fear clouded J.

The Hadarian didn’t look daunted one bit. “Shall we make a bet, Farr? Will you risk losing your expensive captive in front of your entire people for the sake of your pride?”

Farr looked like he’d been struck. Gael whispered something furiously in his ear while his men looked clearly unsettled.

Gods of the Galaxy. Did she horribly misinterpret the situation and the prisoners planned on using her as a means of escape?

Another painful migraine pounded at her head again. The Cobrini dispelled any inkling of panic by molding himself against the curve of her naked back. Fog-like memories slipped into her mind, still all smoky and insubstantial, but J realized she did know the touch of these two men and the sound of their voices.

“I can see through your ruse, traitor. I’ve watched your sordid little moment in the holding cells. You and your Cobrini lover value this Breeder as much as I,” Farr said, his tone a mixture of distaste and something else J didn’t expect. Jealousy, and not of the mild variety either. Farr’s usually handsome face became contorted with fury.

The pressure of the metal barrel on her forehead increased, but fear and worry no longer misted J’s mind. She swore she’d see this episode through the end and finally unravel her mysterious connection to these two men no matter the cost.

The Cobrini behind her spoke. “Like you said, Farr. We space pirates don’t have many morals to begin with. When you shove a man in a cage and leave him there to rot, he can grow really desperate, and men without options learn to be creative.”