11 Alpha Doms to Rock Your World 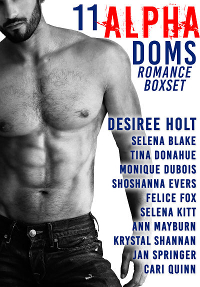 Are you ready for 11 alphas that will make you sigh, make your toes curl, and make your panties wet? You won’t be disappointed! We have military, menage, contemporary, and a dash of paranormal romance that will send you right over the edge.

Jump into the action and suspense and find out now how these alphas take care of their women!

The one woman they shouldn’t want. Two Doms she can’t resist. A sizzling weekend beyond their wildest desires.

Although Ryder and Hud haven’t been immune to Cara’s charms, they don’t have a death wish—her billionaire daddy is a major investor in their high-end construction firm. When she insists it’s no problem and offers to be their sub, visions of blindfolds, collars and her sweet surrender dance in their heads, along with the longing they’ve fought.

Oh baby. The battle’s just begun during a smoking-hot weekend on a private island. 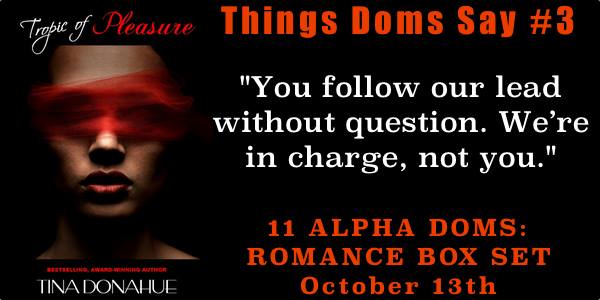 About Tina (You know you want to know!):

Cover Reveal: Bring On the Heat

Bring On the Heat

A scorching collection from ten of today’s hottest authors

Title: Bring On the Heat 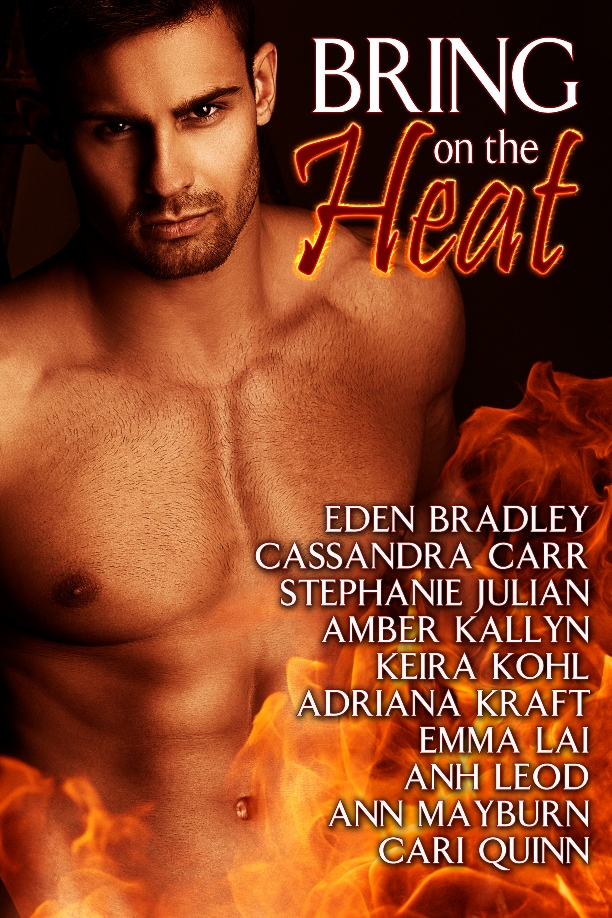 I admit it, I went out and bought a costume for my cat this Christmas. I had planned on putting said kitty into his cute little reindeer antlers and taking adorable pictures of him that would soon rule the internet. In reality I ended up with clawed up hands, pissed off cats, and a cute picture of my dog. 😉

When I tried it with my first cat he promptly ran away, then booked out the door the second one of the kids opened it. The second cat let me cuddle him, but as soon as I tried to put the antlers on his head he contorted, scratched, and ran away. With the third cat I thought I could do it while he was sleeping. I’d just sneak up and put the antlers on his head and it would be magic time.

Unfortunately my third cat is a ninja and sensed me coming. He opened one eye, looked at the antlers, and booked.

Flustered, covered in Band-Aids, and yelling at the cats my dog came up and did that dog ‘Hi Master! This is the best day ever and I love you so much!’ thing. I suddenly realized why you see so many pictures of dogs dressed up in costumes, it’s because dogs have no pride! They’re happy to get dressed up like an elf as long as you give them love. Well maybe happy is an overstatement, but you get the idea. 😉

I hope you have a wonderful holiday and I wish you nothing but the best in the New Year. 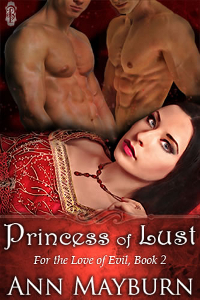 The drums of war are beating in both Heaven and Hell and only the love of a half-demon Princess, Natalia, can stop the oncoming slaughter. Unfortunately, Princess Natalia has her hands full trying to keep her human concubine from killing her demon lovers, in addition to learning how to survive the deadly pleasures and politics of the Court of Lust.

With the abuse of opium increasing in the mortal world, High Prince Belal, ruler of the Deadly Sin Sloth, is gaining power by the  day and threatens to soon rule all of Hell. In a desperate attempt to curb Belal’s powers, Natalia is sent to mortal earth to stop what has been prophesied to be a major turning point in the war. Cut off from her men in Hell, Natalia soon realizes that all is not as it seems.

What may have at first been a blessing has become a curse.

She followed the psychic threads of their link, going through the large formal sitting area, down a hallway, and finally reaching her library. At the entrance to the room, she paused and took a moment to admire Gregor. He sat looking off into the distance in his favorite padded leather chair, facing the paneled windows. While she feared heights, he seemed to enjoy being able to see the intricate quilt of her father’s kingdom spread before them.

The deep auburn tones of his hair caught the light streaming through the window, and she longed to run her fingers through the rough silk. During his time in Hell, he’d been outdoors frequently and the slight tan to his skin seemed darker, especially in contrast to the unearthly pale tones of demons. Around his neck lay a gold collar made of links interspaced with dragon skin. A small swirling pattern of diamonds and sapphires made up the centerpiece of the choker. This, her personal mark, identified Gregor as belonging to her. Compared to some of the other collars she’d seen, it was simple but it suited her.

Gregor tilted his head slightly to the side, his rough features catching the light and throwing his profile into deep shadows. “I missed you last night. Though I’m not surprised you went to him instead of me.”

She flushed as the accusation hung in the air, his jealousy surging through their link and hurting her heart. Leaning against the doorway, she crossed her arms over her chest and watched him carefully. “I wasn’t with Raum last night.”

A small amount of tension went out of his shoulders. “Then you were with Eline.”

He surged from the chair, knocking it over in his haste. Anger and disgust curled his handsome features as he gripped his hands into fists at his sides. “Another! How many men do you plan—?”

“Enough!” The word exploded from her, carrying a hint of the demonic power that still slept in her soul. It echoed through the room as if she’d screamed inside of a rock cavern. Taking a deep breath, she said in a much softer tone, “I wasn’t with another man.”

Gregor took a step forward, then another as his nostrils flared. Finally, he stood right next to her and placed his face against the curve of her neck, inhaling her scent. His voice came out in a grating rumble next to her skin as he said, “I don’t smell either of them on you. The scent is almost…sweet.”

She stepped past him into the library and started to straighten the chair he’d turned over. Before she could do more than touch it, he was at her side and lifting it for her. Without another word, he took a seat in the chair and pulled her into his lap, pressing his face against her chest. “I missed you. Who was she?”

“The Queen of the Succubi.”

He laughed softly then harder, until she was glad he’d sat down or he would have fallen over with her in his arms. “Really? Next time can I watch?”

Ann is Queen of the Castle to her wonderful husband and three sons in the mountains of West Virginia. In her past lives she’s been an Import Broker, a Communications Specialist, a US Navy Civilian Contractor, a Bartender/Waitress, and an actor at the Michigan Renaissance Festival. She also spent a summer touring with the Grateful Dead-though she will deny to her children that it ever happened.

From a young age she’s been fascinated by myths and fairytales, and the romance that often was the center of the story. As Ann grew older and her hormones kicked in, she discovered trashy romance novels. Great at first, but she soon grew tired of the endless stories with a big wonderful emotional buildup to really short and crappy sex. Never a big fan of purple prose, throbbing spears of fleshy pleasure and wet honey pots make her giggle, she sought out books that gave the sex scenes in the story just as much detail and plot as everything else-without using cringe worthy euphemisms. This led her to the wonderful world of Erotic Romance, and she’s never looked back.

Now Ann spends her days trying to tune out cartoons playing in the background to get into her ‘sexy space’ and has learned to type one handed while soothing a cranky baby.