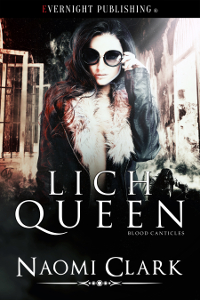 Thanks for having me today! I’m so excited to be sharing my new release, LICH QUEEN, book three in the Blood Canticles series. Anyone who had to deal with me while I was writing this book (friends, family, co-workers) will know I was completely obsessed with it. I love writing Dawn, and her story has so many elements I just love writing in general – ghosts, private eyes, and creepy shenanigans! And anyone who had to deal with me while I was waiting to hear if the book had been accepted, knows I was a total bundle of nerves the whole time (my fiancé is a patient man). For some reason I was convinced I’d get a “no” on this one. Don’t ask me why. It just seemed like maybe Dawn’s story, which gets bleak, might not be a good fit.

But it’s not just bleak! Like the other Blood Canticles books, there’s friendship, mystery, action, and a lot of coffee. If you like your urban fantasy filled with those things (and a side order of zombies, vampires, and demons), you’re going to love LICH QUEEN just as much as I do 😉

You can find the complete Blood Canticles series, in reading order, at my blog here – http://naomiclarkwrites.blogspot.co.uk/p/blood-canticles.html

Her partner is dead, her career is on the rocks, and Dawn fears she herself may no longer be human.

While she struggles with the aftermath of a vampire attack, dead bodies are going missing around Fort Rosser. A demonic plot is brewing, and Dawn and her friends may be the only ones who can stop it. If they can stop fighting each other. And if Dawn can conquer the growing darkness inside herself.

Vampires and demons were just the beginning. 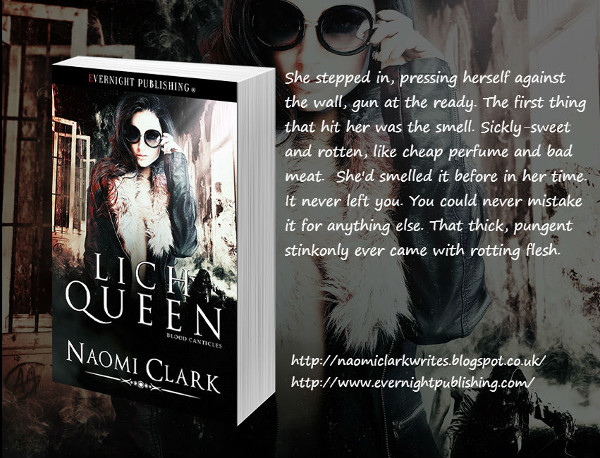 They had to press themselves to the wall to get around the zombie. Dawn kept her gun trained on it the whole time, just in case, but it didn’t so much as twitch. It felt like stopping it had been too easy. Her nerves were singing by the time they reached the landing. Another dark hallway stretched out before them, dented metal doors on either side. Dawn noticed with a chill that a lot of the doors looked like the damage had come from the inside.

“There’s an open unit up ahead,” she told Rhys, watching Eddie drift along, leaving a trail of caramel-tobacco in his wake. “They let some of the less dangerous patients mix freely during the day.”

They’d been in there, on that long-ago murder investigation. It was a big enough room, still lined with basic tables and chairs where patients could sit and read, or play card games, or just … sit. It was a favorite spot for urban explorers to visit, because the masonry was still pretty sound, but the room itself was a wreck, offering the right balance of damage and security for would-be YouTube stars.

Was she supposed to? Seeing ghosts was bad enough, Eddie excluded. She didn’t want to start ‘feeling’ zombies. She shook her head, focusing on Eddie again.

Sure enough, he stopped by the door to the open unit. Those demonic symbols were gouged into the door, deeply scarring the metal. Her pulse raced as adrenaline flooded her. She could hear something on the other side of the door – a muffled mix of footsteps and low, strained voices. She adjusted her grip on her gun, palms sweaty. She carried a standard-issue Glock, six rounds. It had always felt like enough before tonight. Now she was down to three.

“Any last minute advice on dealing with the undead?” she whispered to Rhys.

She wished he didn’t think he was so funny. Eddie beckoned her to the door, giving her a look she knew well. Caution, mixed with determination. She didn’t need to hear him speak to know what he was thinking. Go time, Dawn.

She nodded at him.

The way into my parlor is up a winding stair…

“So cliché,” she said, earning a strange look from Rhys. She answered him with a smile that felt unpleasant. “Go time,” she said, and eased the door open.

Naomi likes writing, perfume, fancy tea, and unfathomable monsters from the dark spaces between the stars, not necessarily in that order. She has been writing stories ever since she learned how to write, but is still trying to master the art of biography writing. When she’s not dealing with werewolves, demons, or sea monsters, she’s hanging out with her cat and probably watching a documentary about Bigfoot. If the cat isn’t available, she’s with her fiancé watching cookery shows and silently plotting her next book. 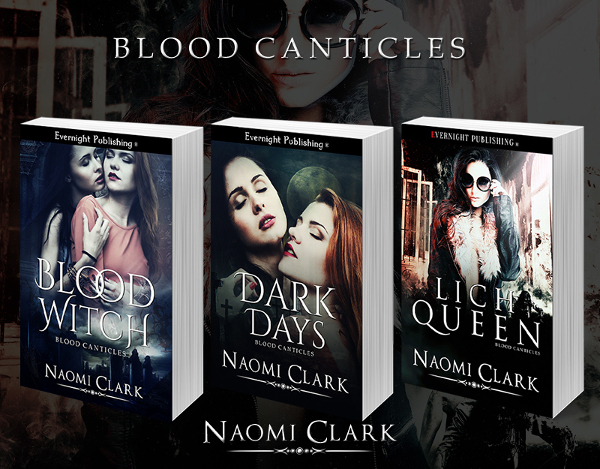