Sunday Snog – Her Majesty’s Back Garden

Here’s a snog-tastic snippet from my latest release, Her Majesty’s Back Garden, which appears in Sex in London, edited by Elizabeth Coldwell.

I looked around. There was plenty of cover on three sides of us, and on the fourth was a very high wall – which I presumed was the perimeter wall for the estate. The hustle and bustle of London lay just beyond. I continued to examine the area, convinced there were security cameras hanging from every other branch, and snipers on all the others. If there were, I couldn’t see them, so I turned to Gavin and grinned, my horniness overriding any misgivings.

He responded by walking towards me, grabbing my hips and backing me up to a tree. I was trapped between rough bark and my husband’s hard body. It was lush. Then he kissed me again, and if I’d thought the snog on the bench was hot; that was nothing. Gavin seemed to pour every ounce of passion and need he had into that kiss, and I could do nothing but enjoy it. And that was just fine.

I reached around and grabbed Gavin’s muscular ass cheeks, and pulled him even more tightly to me. His eager erection pressed insistently into my stomach, and I had to concentrate hard on not moaning with pleasure.

Gavin’s tongue pushed against my lips, and I opened my mouth eagerly to admit it. It slipped sensually against my own, twisting, tickling and mock-fighting until I was almost weak with lust. He shifted his hands from my hips and cupped my face, and then proceeded to suck and nibble at my bottom lip until my pussy throbbed and my clit ached, desperate for attention.

But it seemed that despite our precarious position, Gavin was in no rush to get full on down and dirty. When I thought about exactly what our position was, thrills of excitement ran through my body. It was crazy, yet incredibly arousing. What would happen if we got caught? I had some vague information in my head about indecent exposure which could lead to arrest. But this was a special circumstance—we were in the Queen’s back garden, for fuck’s sake! Would that make the crime even graver? Would we be dragged before the monarch herself to be given a punishment befitting the offense?

You can get your hands on Sex in London here.

Yep, I’m welcoming myself to Filthy Friday again! This time, though, I’m going to tell a little about my story in Smut in the City… 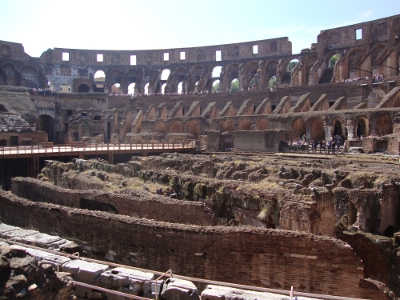 My tale, Within the Crumbling Walls is set at the Colosseum in Rome. Why, you might ask? Well, it’s simple. I visited Rome for the first time in May and did lots of exploring, so it made sense to set my story in that particular city, as I suspected popular cities others would have chosen would be Paris and London. Oddly, we didn’t have one set in Paris, which surprised me.

When I visited the Colosseum, I noticed an area that had been fenced off to the public. It made me a laugh a little that that particular area had been deemed unsafe, when the entire building was ancient and crumbling. Then I went on my merry way, exploring the awe-inspiring structure. But obviously that particular thing stuck with me, as when I sat down to think about what I was going to write about, I decided on Rome, and then the Colosseum. And that’s how my characters ended up doing naughty things in an ancient monument.

So, there you have it. Another insight into how my crazy mind comes up with story ideas.

Sunday Snog – Within the Crumbling Walls

Leaning on a barrier and looking out, Libby saw that arena “floor” was not an accurate description. At one end of the enormous structure, a wooden base had been erected, but the rest of the oval was open, displaying what lay beneath. It looked like a labyrinth, and suddenly she became aware of an English-speaking tour guide telling his group the history of the place. She eavesdropped for a while, then fell to thinking how lucky she was to have been born in this day and age. She’d never know anyone who’d be thrown to their deaths in such a place—or be forced to watch them killed in such a brutal manner.

A little shudder ran down her spine as she thought of the horrific violence that had taken place in the structure. Yet now it sat majestic and even quite serene as thousands of tourists per day wandered within its boundaries. Her morbid thoughts reminded her how alive she was, and what a good life she had. A great job, fantastic boyfriend, and the means to be here, in Rome, visiting the Colosseum. Not everyone was so fortunate.

As if he’d read her thoughts, Ciaran slipped his arms around her shoulders and pulled her into a hug, and pressed a kiss to her hair.

“It’s great, isn’t it?” he said, grinning down at her. “Such an interesting place, and yet it has such a horrible history.”

Libby nodded. “I was just thinking something pretty similar myself.”

“Ah, you see, great minds think alike.” He leaned down to kiss her and she returned it eagerly, closing her eyes and opening her mouth to admit his tongue. With the sun beating down on her and her previous thoughts of feeling very alive, Libby suddenly felt horny. Despite her dislike of over the top public displays of affection, she managed to forget the crowds that were milling round them and enjoyed a long and delicious kiss with Ciaran. She only pulled away when her hormone level suddenly shot up to fever pitch and urged her to take things to the next level.

She stepped back a little, opening her eyes and squinting in the sudden light. Then she sucked in a lungful of air and felt her cheeks heat up as she realised she’d just gotten hot and heavy with her man in front of dozens of complete strangers. Not that it would have been better if it had been dozens of people she knew—but still, they’d gone way past a chaste kiss on the lips in public, and now she was embarrassed.

Giving Ciaran a wry grin, she nodded in the direction they needed to go to see the rest of the Colosseum, and asked, “Ready to see everything else?”

“Sure am, baby.” His eyes glinted with amusement, and if she wasn’t mistaken, arousal. Libby’s gaze flicked down to her boyfriend’s crotch, and a fresh rush of heat rushed to both her cheeks and her groin when she saw the erection he was sporting pressing against his cargo trousers. It wouldn’t have been nearly so noticeable had he been wearing jeans, but of course, it was far too hot for denim. And now, as her libido went crazy, Libby decided it was far too hot for any clothes at all, and wished more than anything that the crowds would disappear and leave her and Ciaran totally alone and able to act on their lust.

Unfortunately, the crowds didn’t disappear. They didn’t even lessen, and Libby was left with the choice of sucking it up and continuing their visit, or grabbing Ciaran and dragging him all the way back to their hotel for sex. That would mean going back on the Metro, avoiding smelly people and pickpockets, then heading through the busy area they were staying in—and all in extreme heat. She shook her head. No, she’d shove her sudden friskiness to the back of her mind and act on it later. For now, they had an ancient monument to explore. They wouldn’t be in Rome again any time soon, so they should make the most of it.

You can get your hands on Smut in the City here.